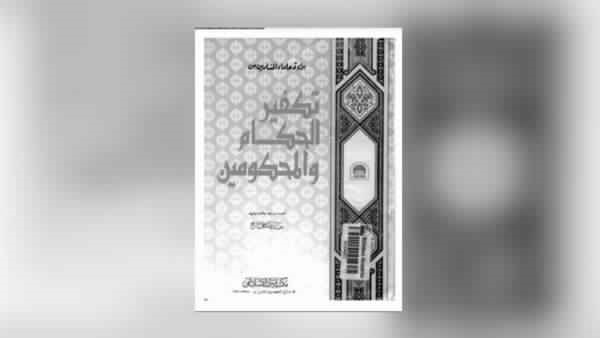 The book of “The Muslim scholars’ acquittance from declaring the rulers and people as koffaar (disbelievers)” authored by Abdullah Hajjaj, one of the authoresses discussed and criticized the intellectual basics and premises of the terrorist and violence groups.

This book consists of 330 pages, including 44 chapters, discussing 3 major axes; the first one is interpreting the creed of Sunni (This denomination of Islam is referred to as ahl as-sunnah wa l-jama’ah, the people of the sunnah and the community, which is commonly shortened to ahl as-sunnah).

The second axis expresses the oppression of charging with infidelity. The third one declares the rules of Enjoining good and forbidding wrong.

The author used the common intellectual basics between the creed of Sunni, and the terrorist groups to undermine the intellectual premises of those groups, through delegitimize their behaviors, relying on the Sunni interpretations to the holy Quran and Hadiths (the prophet statements).

The author in some chapters of the book illustrated the first axis expressing the main characteristics of the Sunni creed such as inference methods. He also reviewed -in numerous chapters- the other Islamic Sects, which differ with Sunni, explaining the differences between them.

The writer controverted dissenters’ creed (Khawarij), origin, their practices and their insurrection against the true Sunni faith. According to the book the modern Takfiri doctrine is the intellectual extension of Khawarij, which call for sanctioning violence against leaders who are deemed insufficiently religious.

The writer uncovered that the terrorist groups differ to the approach of Sunni scholars, in dealing with guilt’s of rulers and ruled, Sunnis are advised, while Khawarij resort to violence as a single way.

The author responded to the suspicions of the takfiris in case of the rulers decided that to not implement the shari’a, as he mentioned we cannot accusing the rulers of being infields as long as the Constitution tested that the Islamic Sharia is a major source of legislation.

He pointed out that it is not permissible to make any criticism of the ruler, considering that the head of state is a legitimate ruler, because the public criticism of the ruler leads to chaos and sedition that harms all Muslims, individuals and communities, citing the Prophet (peace and blessings of Allah be upon him) the advice for Sultan, should not br publicly.

Hajjaj criticized the violent methods of change pursued by some groups, considering that the lack of commitment to ethics and Tolerant in the rules of Enjoining good and forbidding wrong, that leads to more adverse consequences.

The author decided, after mentioning a number of verses, that all those who entered the Islamic countries from non-Muslims, have work or trade, and were allowed to do so, are either “ally” or “Musta’min” (safe-conducts). Both may not be attacked in any way, The Prophet (peace and blessings of Allah be upon him) said: “Whoever kills an ally does not smell the scent of Paradise.”

The writer showed that those who violate these principles harm Islam and show it to people as treachery, betrayal and terrorism.

The book reviewed the statements of Ibn Taymiyyah and his student Ibn al-Qayyim, both of which are historical references adopted by the scholars of Ahl al-Sunnah wal Jama’ah, and showed that they were against the hasty acts that are performed under the pretext of enjoining good and forbidding evil.

The authored cited a number of Fatwas of Sheikh Abdul Aziz bin Baz, the former mufti of Saudi Arabia, in which he likened those who were driven by unrelenting religious zeal to the Khawarij approach, and doing great religious violations.

He also cited writings of the famous modern scholar Nasir al-Din al-Albani, in which he warned of accusing Muslims of infidelity, when he acts contrary to religion.