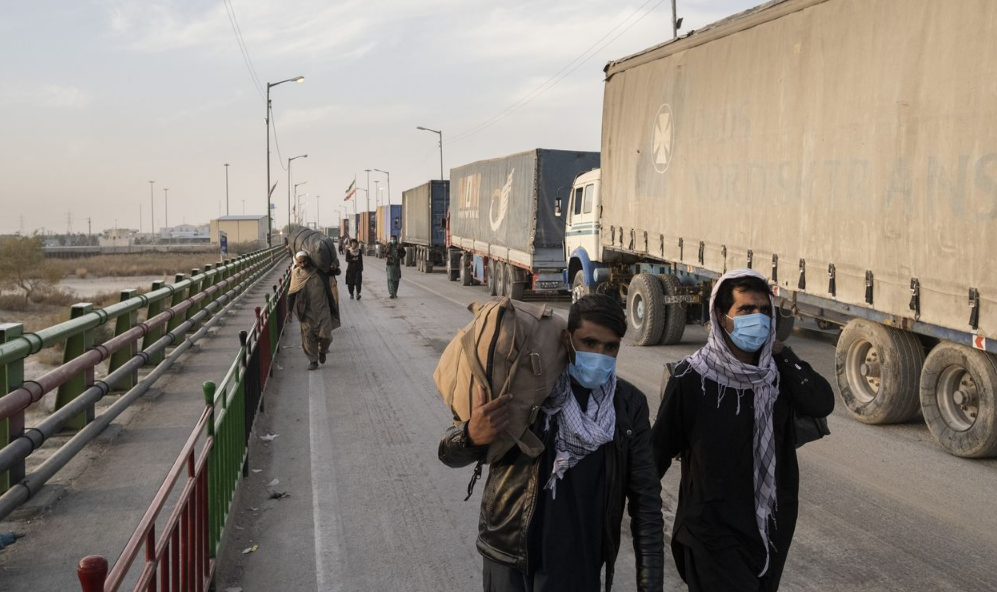 Two decades ago, Iran helped the U.S. topple the Taliban regime to remove what it saw as a threat to its national security and fellow Shia Muslims in Afghanistan.

Now, four months after the Taliban seized power in Kabul, Iran and Afghanistan are both struggling under crippling U.S. sanctions—a predicament that is pushing them to put longstanding ideological and political differences aside as they seek to fill the vacuum left behind by American troops.

“The countries have already grown closer,” said Ghulam Noorzai, a businessman in Nimroz, a trade hub in Afghanistan’s southwestern border region, who imports fuel and construction materials from Iran. “They have no other choice.”

Relations between Iran’s Shiite Muslim theocracy and the Sunni Muslim Taliban are laced with decades of mistrust and outright conflict. In 1998, the Taliban killed 10 staff members of the Iranian Consulate after seizing the northern city of Mazar-e-Sharif. The two countries nearly went to war.

Significant tensions remain between the Taliban and Iran. Both sides are fighting over increasingly scarce water supplies. Iran-backed militias operating in Afghanistan pose a threat to the Taliban. And there is alarm in Iran over Afghan drug traffickers crossing into Iranian territory.

Sharing a nearly 600-mile border, Afghanistan and Iran are vital trading partners. In recent years, Afghanistan has been one of Iran’s few sources of foreign currency, as U.S. sanctions have cut Tehran off from the global banking system. Similar sanctions were applied to Afghanistan after the Taliban takeover, causing the banking system to seize up.

Iran extensively supported the anti-Taliban Northern Alliance in the 1990s and cooperated with Washington on ousting the Taliban regime in 2001. Tehran, however, took a much more nuanced stance in the following years, after President George W. Bush named Iran as part of an “axis of evil.”

Over the past decade, Iran maintained close ties with the Afghan republic’s government while also nurturing relations with the Taliban and backing their goal of evicting American troops from the region. Iran, unlike Western nations, didn’t close its diplomatic missions in Afghanistan after the Taliban takeover, though it offered asylum to anti-Taliban warlords such as Ismail Khan. No nation has yet recognized the Taliban as Afghanistan’s legitimate government, however.

“Many Iranian officials believe that the Taliban have changed. They are more experienced today than a decade ago and now they have no choice but to coexist with their neighbors including Iran,” said Diako Hosseini, a political analyst in Tehran and former adviser to the Iranian president’s office. “Only by cooperation and keeping diplomatic windows open, Iran would be able to safeguard its vital interests regarding drug trafficking, terrorism, and immigration.”

Taliban officials say they have moved on from past disagreements.

“We have no problem with Iran or any other country,” said Noor Ahmad Islamjar, the Taliban’s governor of Herat province, which borders Iran. “We want to increase trade with Iran, Pakistan, Central Asian countries and the whole world.”

The extensive nature of ties between Afghanistan and Iran is evident in Nimroz. Smugglers carry goods from potatoes to fertilizer and fuel through the desert from Iran to Afghanistan, their pickup trucks whipping up a trail of dust clouds. In the opposite direction, other vehicles carry drugs—Afghanistan is the world’s largest heroin and opium exporter—or humans, who have been fleeing the Taliban advance in droves.

Dozens of fuel trucks cross the Silk Bridge connecting Iran to Nimroz every day, alongside throngs of migrants who are deported back to Afghanistan in record numbers from Iran.

On the streets of Zaranj, the capital of Nimroz, street vendors hawk Iranian spices and fruit covered in dust, and accept Iranian rials as payment. The street lamps illuminating Zaranj, a patch of light amid deserts of darkness, are powered with electricity flowing from the Iranian grid.

From August to December, Iran imported $45 million in goods through western Afghanistan, a 20% increase from the same period last year, said Ahmad Saeed Qasimyan, deputy of the Chamber of Commerce in Herat. Over the same period, the Afghan economy has shrunk by an estimated 40%, according to the United Nations.

As U.S. sanctions curtailed trade with countries in Europe and the Gulf and have paralyzed Afghanistan’s banking system, Iranian businessmen have stepped in to fill the void, he said.

Saeed Aminshah Hosseini, sales manager of the swanky Zaitoon supermarket in Herat, said he had replaced the 60% to 65% of the shop’s brands that used to be Turkish or European with Iranian products. “We will 100% become more dependent on Iran if this situation continues,” said Mr. Hosseini.

Over the past decade, Iran built a buffer zone in western Afghanistan, partly to safeguard its border from Islamic State, by supporting local armed groups including Taliban commanders. After the Taliban took power in August, Iranian President Ebrahim Raisi called the U.S. military defeat in Afghanistan “an opportunity to restore life, security and lasting peace.” Tehran now expects a payoff in political and economic influence, experts said.

“Iran sees a big opportunity, and one they’ve been preparing for, for a long time,” said Colin P. Clarke, a senior research fellow with the Soufan Center, a New York-based think tank. “They’ve invested in this relationship, and now it’s time to get something for it.”

One Iranian ally in Afghanistan is a Shiite militia called the Liwa Fatemiyoun. Thousands of young Afghan fighters were recruited into the Fatemiyoun by Iran’s Islamic Revolutionary Guard Corps to fight for President Bashar al-Assad in Syria. As the Syrian war has wound down, many battle-hardened Fatemiyoun fighters—who are fiercely anti-Taliban—have returned to Afghanistan or Iran.

In the Shiite-dominated neighborhood of Dasht-e Barchi in Kabul, several Taliban members have been killed in nighttime assassinations in recent weeks. The Taliban officially say the killings were private disputes, but members with knowledge of Taliban intelligence say they believe the assassins were members of Fatemiyoun.

“Iran is not itching to get into a fight in Afghanistan,” said Mr. Clarke.

“They are not under any illusion that they would fare any differently from any other interfering country. That said, they’ve got some proxies like the Fatemiyoun and Afghan warlords that they could activate,” he said. “It’s a card up their sleeve that they can play.”

In another flare-up, a gunbattle broke out between Iranian border police and Taliban fighters in early December over a disputed border demarcation in Nimroz. Taliban fighters filmed themselves laughing and firing mortars toward the Iranian police on the other side of the border. Taliban and Iranian officials quickly minimized the clash as a misunderstanding.

“It was a local action, not something desired by leaders,” Mr. Islamjar, the Herat governor, said. “Our leaders and the leaders of the Iranian government don’t want to confront each other militarily.”

A potentially more explosive conflict is brewing further into the desert, where Iran and Afghanistan are embroiled in a decadeslong dispute over water resources.

Sitting in a Ford Ranger inscribed with the insignia of the former U.S.-funded national police, Taliban commander Hemmat Agha stared across the Kamal Khan Dam’s electric blue water into the desert where Afghanistan meets Iran.

“We have blocked the water to Iran,” said Mr. Agha, the black-bearded commander of the dam project in Nimroz, which is being constructed on the Helmand River on its path into Iran. “So we expect them to do something.”

Once finished, Kamal Khan Dam is meant to irrigate 175,000 acres of agricultural land and generate nine megawatts of electricity. It also diverts water that would otherwise end up in Iran.

Tehran has for years accused Afghanistan of appropriating more than its fair share under a 1973 water treaty between the two countries, drying up wetlands on Iran’s side of the border. The previous Afghan government accused Iran of arming Taliban rebels to disrupt the dam project. Now, the Taliban has stationed 1,000 fighters to protect it, inside the dam and at checkpoints dotted around the desert.

Both countries need all the water they can get. Afghanistan faces its worst drought in four decades and impending famine. The Iranian government this year has contended with protests over water shortages caused by climate change and government mismanagement.

“We need all the water for ourselves,” Mr. Agha said, as birds flew low over the reservoir’s surface, circling over a herd of camels drinking out of the shallow water. “If we didn’t secure the dam, Iran would attack,” he said.