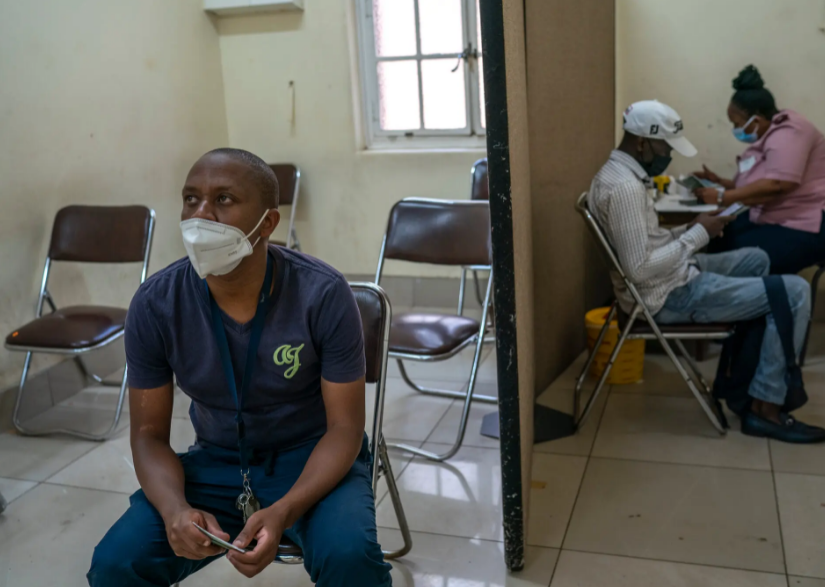 The detection of the Omicron variant in Africa signals the next stage of the battle against Covid-19: getting many more people inoculated in poorer nations where vaccines have been scarcest in order to deter new mutations from developing.

But while world leaders sometimes talk about this as if it were largely a matter of delivering doses overseas, the experience of South Africa, at least, hints at a far more complex set of challenges.

Like many poor countries, South Africa was made to wait months for vaccines as wealthier countries monopolized them. Many countries still do not have anywhere near enough doses to inoculate their populations.

The problems have not ended as shots began arriving in greater numbers.

Neglected and underfunded public health infrastructure has slowed their delivery, especially to rural areas, where storage and staffing problems are common.

And now, there are growing signs in parts of Africa, as well as South Asia, that skepticism or outright hostility toward the Covid vaccines may run deeper than expected, even as the new and possibly more dangerous Omicron variant is spreading. In Africa, at least three countries have now reported Omicron cases: South Africa, Botswana and, on Wednesday, Nigeria.

Deep distrust of governments and medical authorities, especially among rural and marginalized communities, may already be stalling out vaccination drives. The legacy of Western exploitation and medical abuses during and after colonialism is weighing heavily, too.

Misinformation circulating on social media often fills the vacuum, some of it floating in from the United States and Europe, where vaccine refusal has also been an issue.

“There’s no doubt that vaccine hesitancy is a factor in the rollout of vaccines,” said Dr. Matshidiso Moeti, the Africa director of the World Health Organization. News or rumors of potential side effects, she said, “gets picked out and talked about, and some people become afraid.”

Just days before the Omicron variant was first detected, health officials in South Africa turned away shipments of doses from Pfizer-BioNTech and Johnson & Johnson, worried that their stockpile of 16 million shots might spoil amid insufficient demand.

Though only 36 percent of South African adults are fully vaccinated, daily vaccinations have already been flatlining, according to government statistics.

It is not just South Africa.

Namibia, Zimbabwe, Mozambique and Malawi have also asked vaccine manufacturers and donors to hold off on sending more shots because they can’t use the supplies they have, according to several health officials involved in the effort to distribute vaccines to developing nations.

Research has consistently found that factors like public distrust and uneven vaccine distribution can increase vaccine hesitancy in any country. But these issues have often been more prevalent in poorer countries during the pandemic, said Dr. Saad Omer, a Yale University epidemiologist, and they have had a deeper effect.

Public messaging campaigns and carefully orchestrated vaccine deliveries can counteract the distrust — but they are in short supply.

“Almost no investment in vaccine education or promotion has gone into low-income countries,” Dr. Omer said. “Why do we expect that all we will have to do is drop vaccines at an airport, do the photo op, and people will come running to the airport and grab the vaccine?”

Only one in four health workers in Africa are vaccinated, World Health Organization officials have said. In several countries, fewer than half say they intend to get vaccinated.

It is not a problem only for Africa.

In India, health workers have met sometimes-violent resistance in rural communities. Vaccine hesitancy rates there approach 50 percent among those who have not completed high school. In some parts of the country, more than a third of doses spoil amid the low demand.

Still, many are eager to be vaccinated. When doses first became widely available in South Africa earlier this year, a third of the country’s adults swiftly got inoculated, a pattern that is repeating elsewhere.

Experts stress that even partial uptake will slow the spread of new or existing variants. But that may not be enough to achieve the high vaccination rates needed if the world is to put the pandemic behind it.

Distrust of government and medical authorities long predates Covid in South Africa. But a series of setbacks with the vaccine rollout, as well as widespread allegations of corruption amid last year’s lockdown, have heightened public unease.

The group has been holding vaccine information sessions, but overcoming skepticism is not easy. After a session in the Pretoria township of Atteridgeville, one 20-year-old who attended said she had not been persuaded.

“I think that Covid is not real,” said the young woman, Tidibatso Rakabe. “They are playing with us, politicians and everyone.”

Many say they fear side effects.

Earlier this year, reports of extremely rare blood clots led the United States to briefly pause delivery of the Johnson & Johnson vaccine, leading South Africa to delay its rollout to health care workers. Both countries decided to resume the shots after concluding that they were safe.

The South African government held regular briefings, but these were on television and in English, when radio remains the most powerful medium and most South Africans do not speak English as their mother tongue.

Online registration systems also left out millions who do not have regular access to the internet.

Lockdown relief efforts were tainted by corruption scandals, in which the president’s spokeswoman was forced to step down. The health minister later also resigned after his office was found to have fraudulently awarded a $9 million communication contract.

The racial divide is another major factor.

White South Africans are significantly more likely than others to express skepticism of the vaccines, a recent study found. That is in part because of mistrust of the Black-led government, but also because American Covid conspiracists have found wide reach among white South Africans on social media, according to Mr. Vick of Covid Comms.

Though Black South Africans express greater openness to inoculation, they are vaccinated at lower rates, often citing difficulty getting to vaccination sites. Some also express hesitation about getting a second shot.

Vaccine hesitancy has long hampered global vaccination drives, which health experts say indicates that some of the drivers predate the pandemic.

In poor, rural areas, health resources are often scarce. Doctors from the capital or from abroad often oversee vaccinations. But histories of neglect and exploitation leave communities distrustful of outsiders bearing mysterious shots.

The first modern, worldwide campaign, begun in 1959 against smallpox, provoked deep skepticism in parts of Africa and Asia, where it was seen as a continuation of colonial-era medical abuses. Some W.H.O. officials used physical force to vaccinate people, deepening distrust. The campaign took 28 years.

The effort to eradicate polio, which finally ramped up in poor countries in the 1980s and is still ongoing, has run into similar resistance. A study in the science journal Nature found that vaccine avoidance was highest among poor or marginalized groups, who believed that the health authorities, and especially Western governments, would never voluntarily help them.

In Nigeria in the early 2000s, amid a spike in religious tensions, unfounded rumors circulated that foreign health workers were using polio vaccines as cover to sterilize the country’s Muslim population. Boycotts and local bans led to a polio resurgence, with cases spreading to 15 other countries, as far as Southeast Asia.

Similar rumors surfaced among India’s Muslim minority, after which polio cases increased by a factor of six in one year.

The health authorities now may be paying the price for long years of exploitation before and after colonialism that instilled deep distrust of Western medical authorities. A 15-country survey by the Africa Center for Disease Control found that 43 percent of those polled believe Africans are used as guinea pigs in vaccine trials — a legacy of Western drug companies’ doing exactly this in the 1990s.

Even within their own borders, Western governments are struggling to overcome vaccine resistance. So it is hard to imagine them doing better in faraway societies where they lack local understanding.

“If the objective is to keep the U.S. and the rest of the world safe, it should be pretty obvious that the success of the domestic program depends on what happens internationally,” Dr. Omer said.