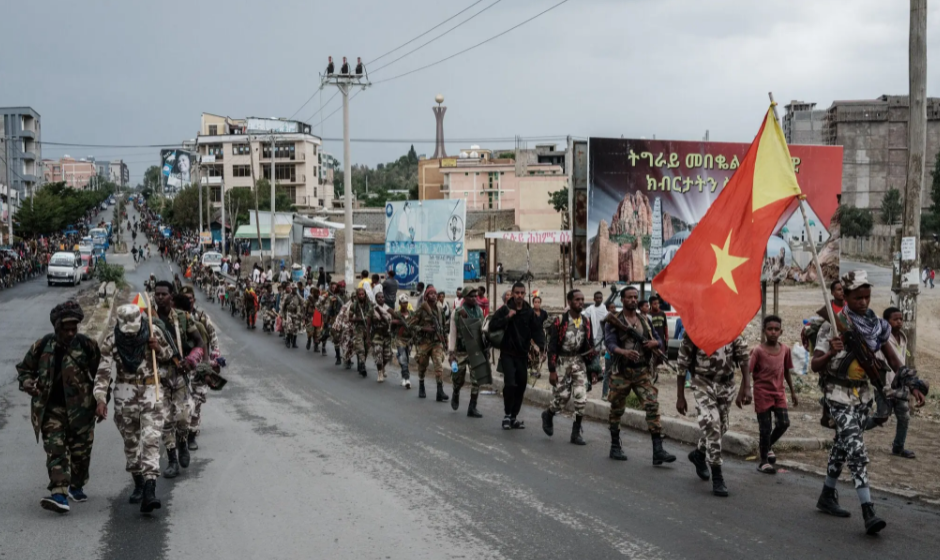 The Tigrayan rebels fighting Ethiopia’s government carried out dozens of executions against civilians in two towns they controlled in August and September, Human Rights Watch said in a report on Friday, adding to the list of alleged violations committed by the forces since the civil war in Ethiopia began 14 months ago.

The fighters “summarily executed” 49 people in the village of Chenna and the town of Kobo in the northern Amhara region between Aug. 31 and Sept. 9, the rights group said.

In Chenna, over the span of five days, Tigrayan rebels killed 26 civilians on 15 separate occasions before leaving the village on Sept. 4, the report found. Those killed included farmers, grandparents and residents who had declined to slaughter livestock for the fighters, it said.

Residents also told Human Rights Watch they were forced to stay in their homes alongside the Tigrayan forces, even as the rebels shot at and received return fire from Ethiopian troops posted in nearby hills. The human rights group said such actions could amount to “human shielding,” which is considered a war crime under the Geneva Conventions.

In Kobo, the rebels executed 23 people, including farmers returning home and men relaxing at a social joint, the report said.

The report adds to the mounting violations committed by the warring parties since the conflict in Ethiopia’s northern Tigray region began in November 2020. The Ethiopian defense forces and their Eritrean counterparts, along with Amhara regional forces and Amhara militias, have all been accused of carrying out transgressions including extrajudicial killings, sexual violence and attacks on refugees.

Getachew Reda, a spokesman for the Tigray People’s Liberation Front, the party in control of the rebels, did not immediately respond to questions about the latest violations.

Much of northern Ethiopia has been hard to access since the conflict began, and a communication blackout has made it hard to verify information or reach victims and their families. Human Rights Watch’s latest report was based on remote interviews with 36 people, as well as obtained documents.

On Friday, Human Rights Watch called for the United Nations Human Rights Council to establish an investigative body to probe the crimes against civilians committed by both sides.

“Unfortunately the abuses we have uncovered by all sides to the conflict are likely just the tip of the iceberg,” Gerry Simpson, associate director for crisis and conflict at the rights group, said in a phone interview from Geneva.

The report comes a month after Amnesty International released a report accusing the Tigrayan forces of raping women, robbing them at gunpoint and looting health facilities in the town of Nifas Mewcha in the Amhara region in August.

In late October, they took over two towns on a critical highway connecting the landlocked nation to the ports of neighboring Djibouti and began to advance on the capital, Addis Ababa. That pushed Prime Minister Abiy Ahmed to declare a state of emergency and then go to the front line to lead the troops.

Since then, the Tigrayan forces have sustained losses on the battlefield, including the strategic towns of Dessie and Kombolcha, according to the government.

Billene Seyoum, the spokeswoman in the prime minister’s office, accused the rebels on Tuesday of destroying hospitals, hotels and commercial banks, and of ransacking the airport in the historic city of Lalibela, which they had captured in August but lost earlier this month.

Stéphane Dujarric, the spokesman for Secretary General António Guterres, on Wednesday said the World Food Program had suspended food distribution in both Dessie and Kombolcha after staff members were held at gunpoint and food supplies were looted.

“The small-scale theft of food escalated into mass looting of warehouses across Kombolcha in recent days, reportedly by elements of the Tigrayan forces and some members of the local population,” Mr. Dujarric said in a briefing with reporters.

In a statement released Friday, the Tigrayan forces denied looting the warehouses in Kombolcha.

The plundering of food supplies threatens to worsen malnutrition in Ethiopia, where the United Nations estimates that at least 9.4 million people are suffering from food insecurity.

Aid delivery continues to face challenges because of the conflict, Mr. Dujarric said on Thursday, with the number of aid trucks that reached Mekelle, the Tigray regional capital, falling to 44 between Dec. 1 and 7, compared with 157 a week earlier. The United Nations has said that a minimum of 100 food trucks a day must arrive in Tigray to ease the hunger crisis.

After claiming major advances on the battlefield, Mr. Abiy returned to the capital, his office said this week. But his government continues to face criticism over its handling of the war, for continuing to carry out a detention campaign targeting ethnic Tigrayans and for its treatment of the media.

This week, the Committee to Protect Journalists listed Ethiopia as the third jailer of journalists in Africa behind Egypt and Eritrea.

Muthoki Mumo, the committee’s sub-Saharan Africa representative, said the media environment in Ethiopia has grown hostile since the war began. Authorities, she said, have detained reporters without formal charges and policed language and terminology used in stories, while many journalists have faced vicious harassment online for their coverage.