Latest Posts
18:42
Home Islamist Movements ‘They said they want to kill all of us’: Tigray rebels accused of ethnic cleansing 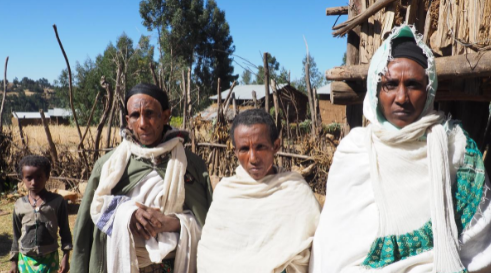 ‘They said they want to kill all of us’: Tigray rebels accused of ethnic cleansing

A group of mourners wrapped in traditional white shawls had gathered at a home in the northern Ethiopian town of Gashena. Sitting on animal skins, they listened in silence as Bayush Terefe said that a group of rebels had turned up six days before and dragged Terefe, her father, outside.

They shot him in front of her and other family members. Thin shafts of light poured through bullet holes in the house’s mud walls. “They told us they want to kill all Amharas,” Bayush said. “I don’t know why.”

The Amhara are Ethiopia’s second biggest ethnic group and their region has become the latest front in a civil war that broke out more than a year ago, plunging Ethiopia into turmoil. Thousands have been killed and allegations of war crimes have been made by all sides. Millions have been left homeless and the UN is warning of famine.

A push by rebels of the Tigray People’s Liberation Front (TPLF) brought them within 135 miles of Addis Ababa last month, prompting an exodus of western diplomats. But after the prime minister, Abiy Ahmed, went to the front line just under three weeks ago to boost his troops’ morale, a government counteroffensive has pushed the rebels back towards their northern Tigray region.

Evidence of this fightback, led by a patchwork of volunteer militiamen, regional special forces and the national military, is visible everywhere in Gashena, a drab town on a strategic crossroads where fighters in mufti and camouflage were drinking tea and soft drinks in roadside cafés as they waited to be called to the front six miles away.

In nearby fields artillery pieces lobbed shells at rebel positions, their booms accompanied by the rattle of distant gunfire.

Residents said that the four-month rebel occupation of their town was marked by killings, harassment and vandalism. Before her husband was killed, Yamrot was forced to billet and feed dozens of rebel fighters for weeks. The two houses next door are home to women whose husbands were shot by the TPLF when they arrived in August. They were also made to house and feed the rebels, whose comrades had killed their men.

In total 57 civilians were killed in Gashena by the TPLF, according to the mayor, Molla Tshagaw, who said most were summarily shot by the rebels as they withdrew. The victims were buried in mass graves in the main churchyard. Sitting nearby, a priest said that he had handed out grain and cereals at services during the occupation, as many worshippers could not feed themselves.

A few miles away, Minaise Hailu Mesfin, a civil servant, said the rebels had tied him up and beaten him, accusing him of stashing weapons. They also took money and stole his mobile phone and laptop, he said.

“We were fine: we lived in peace here. When the TPLF came to Amhara, we didn’t have anywhere to go. We were afraid. They said, ‘You are a helper of Abiy and the Amhara force.’ I told them that I was a civilian and I didn’t have a gun, but they didn’t understand. They beat me with a chain.”

Two of Minaise’s old university friends were among the occupying Tigray rebel force. “They were very angry when I explained that I was beaten,” said Minaise, 30, adding that rebel commanders later apologised. “The generals were polite, but most of the ordinary troops acted very badly,” he said.

Another resident, Tefera Gataye, 28, said that TPLF fighters had tried to rape his wife in front of their children after they captured Gashena. When they saw an Ethiopian flag painted on the wall of his house, they demolished it and accused him of belonging to the ruling Prosperity Party.

Last week, during the battle for Gashena, Tefera said he watched a group of TPLF rebels enter a house. When they disappeared out of sight he heard gunfire. Later he said that he found 16 bodies, including two children. “They killed them because they wanted to destroy Amharas,” he said.

Views like these are widespread in Amhara, where regional leaders have cast the fight as a battle for ethnic survival, while amplifying reports of rebel atrocities. There is also a deep mistrust of foreigners, fed by government officials who claim the TPLF’s insurgency is backed by a vast international conspiracy. At checkpoints on the road into Gashena, soldiers shared stories of obscure “white” agents fighting alongside the rebels and asked foreign journalists if they worked for the BBC and CNN, which they accuse of spreading fake news about the conflict.

The Tigray rebels claim their withdrawal from territory in Amhara is strategic, not the consequence of battlefield reversals. But the militiamen who helped to recapture Gashena describe days of fierce fighting. The signs of this battle are everywhere, in the burnt-out shells of rebel tanks on the road leading into the town and in the heaps of stones piled into crude firing positions that litter fields.

Much of this war has been fought with a mixture of low and high technology. Analysts believe Chinese and Turkish drones helped to repel the rebels, but so did the raising of hundreds of thousands of militiamen, some carrying ancient rifles and wearing cheap plastic shoes. In place of proper camouflage, mud has been smeared onto white pick-ups ferrying troops to the front, and some soldiers carry their bullets in spare socks. Outside the remains of Gashena’s main school, Wudineh Berihun, 44, said that he gave up his job as a civil servant to join his local militia force, which has roughly 31,000 fighters. Televisions had been stripped from the classrooms by the rebels, and pages torn from exercise books were strewn across the library floor.

“The TPLF juntas destroyed the materials and buildings of the Amhara, so I decided to fight them,” said Wudineh. “This is the only option to secure the peace and security of our region . . . They are really devils — they are not human beings.”

This attitude towards the Tigray rebels, who claim they are trying to secure an aid corridor to their starving region, is shared by Bayush. Her mother’s cheeks are covered in scabs, the result of cuts she has scratched into her cheeks as a sign of mourning for her husband. “We didn’t have any problems before, but when the TPLF arrived they made our lives chaotic,” she said. “They are wild and brutal; they don’t even respect children and women.”