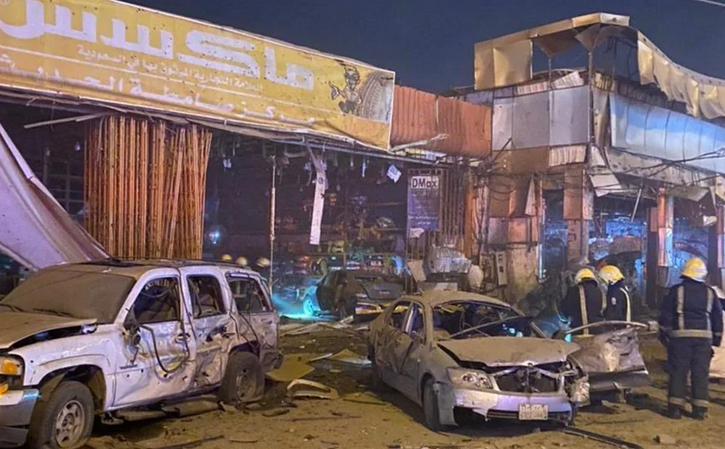 Saudi Arabia has launched a “large-scale” offensive on Yemen after a Houthi missile attack killed two civilians in the south of the kingdom over the weekend in what is thought to be the first fatalities inside Saudi from the conflict in three years.

A projectile hit a storefront in the southern Saudi region of Jizan on Friday, killing two people, injuring at least seven others, and destroying properties and cars, Saudi media reported.

In retaliation, the Saudi-led coalition – which has been fighting the Houthis in support of the internationally-recognised Yemeni government since 2015 – launched an airstrike in the northwest of Sana’a. Yemeni medics said that three people were killed, including a woman and a child, while six others were injured.

The Saudi-led coalition said shortly after the fatal attack that it was “preparing for a large-scale military operation”. The Houthis warned their response would be “painful” if Saudi did not stop its “aggression” on Yemen.

At a press conference on Sunday, the Arab Coalition spokesperson Brig Gen Turki al-Maliki, announced the operation, also presenting evidence of what it described as Hezbollah’s control of Sana’a airport and how the group is converting it to a launchpad for drone and missile attacks.

Sana’a airport has largely been non-operational, aside from aid flights, since August 2016 due to a Saudi-imposed air blockade on the country.

Despite evidence to the contrary, Iran and Hezbollah – the Lebanese militia and political party that is Iran’s main proxy in the region – have long denied their involvement in Yemen. Neither group immediately commented on the allegations made by the coalition.

Fighting which sees civilians bearing the ultimate price are far more frequent inside Yemen as the Iran-aligned Houthis push to take more territory from the exiled government.

On Saturday the rebel group launched a missile on a popular market in Marib City – the capital of the government’s final stronghold in the north of the country and a densely populated urban area home to over a million internally displaced people. According to local media, three civilians were killed, including a 14-year-old child and eight injured, among them a three-year-old.

All sides of the conflict have committed widespread war atrocities: from indiscriminate Saudi airstrikes to the Houthi use of child soldiers, turning Yemen into the world’s biggest humanitarian disaster.