Latest Posts
16:55
Home Islamist Movements Problems of combating terrorism in Europe and its reflection on the future 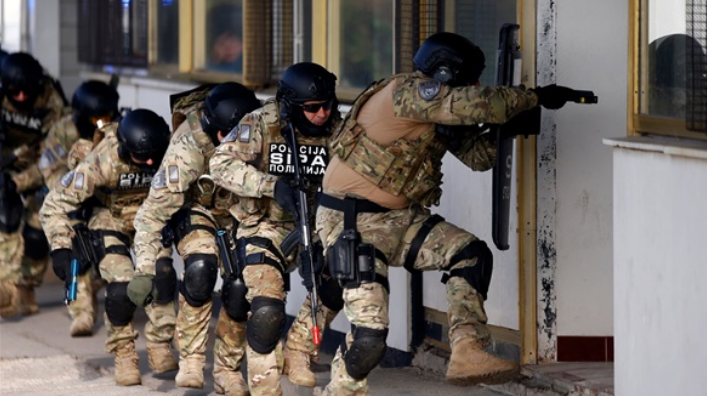 In 2021, European countries escalated their measures to combat terrorism and extremist organizations with an international dimension through security and legal strategies to restrict dangerous elements, driven by fears of the recurrence of violent attacks that re-emerged in the region by the end of 2020.

Europe faces various problems in the fight against terrorism for several features related to the societal nature of these countries, as the region upholds the values of human rights, freedom and equality, as well as imposing restrictions that guarantee freedom of belief and communication between citizens and each other, which makes confronting violence more complex for the region.

The French government completed the measures it had begun in this file during 2021, as Paris was considered the European country most affected by extremist attacks during 2020, and it is also the most serious in confronting terrorism in Europe.

France used various tools in its war against terrorism through legal and security strategies. The legal fight was represented in new bills that serve this purpose, along with government decisions that pave the way for combating terrorism. On February 16, the majority of deputies of the National Assembly approved a bill proposed by President Emmanuel Macron, known as the Principles of the Republic.

It is a law that increases penalties for actions that threaten the cohesion of society and exposes it to secession, in addition to tightening control over cultural and religious centers and places of worship, and confronting foreign funding for these centers, as well as deeper control over extremists.

As for the security aspects, the country decided to close down many associations that were implicated in interpretations that the government saw as justifying the terrorist incidents that occurred in 2020, most notably the beheading of the French teacher Samuel Paty by a young immigrant. On January 16, the government announced placing 76 mosques under surveillance after a security campaign that led it to monitor the beliefs that are promoted inside places of worship.

While the French decision to limit imams to only those in the country, without bringing in religious scholars from abroad, is one of the most prominent decisions in the intellectual fight against terrorism, as this would prevent suspicious foreign employment in French society.

Future of fight against terrorism in France

Regarding what France is doing towards combating terrorism and what it will reflect on its future, Said Sadek, a professor of political sociology at the American University in Cairo, said that France’s decisions in this context aim to undermine terrorist attacks in general, but they will not guarantee a calmer future for the French.

Sadek pointed out in a statement to the Reference that terrorist group elements still have the opportunity to communicate electronically and build secret networks through various internet sites, adding that Paris still has many challenges to prevent online recruitment. Likewise, it will not yet be able to impose a stronger authority on families that recruit their members domestically, along with networks of friends and acquaintances that are already secretive and cautious.

Considering that international terrorism is a relatively recent phenomenon, the need to develop laws to keep pace with its danger remains one of the most important pillars for establishing security, and this problem is one of the most important challenges facing the European Union countries in combating terrorism, as these countries have a strong charter that obliges states to respect personal communications and correspondence between citizens and not to spy on them without evidence supporting their involvement in a crime or terrorist act. Also, European countries do not deal with terrorist presumptions, meaning they rarely fight belief and only move to confront actual behavior.

Switzerland and the human rights debate

Switzerland decided to develop its laws on terrorism and add more updates to them, including tighter control over those who display extremist behavior or opinions without waiting for them to carry out attacks on the ground.

It is true that Switzerland started in these trends in 2020, but this year witnessed an intense debate between the government and human rights associations about the violation of the recent updates to freedoms, and the United Nations expressed its concerns about the law. But despite these fears and criticism, Switzerland did not change its decisions and moved towards completion.

Britain’s problems of laws and rights

As for Britain, it has a record of legal obstacles in this regard, and its positions on addressing extremism ignite the human rights debate inside the country. In November, the government announced its intention to amend the law to revoke the citizenship of extremists without prior notice in order to solve some of the problems the government was facing.

The British Supreme Court had previously objected to the government’s decisions to revoke the citizenship of dozens of citizens, and the court justified its decision that the government must notify these citizens before revoking their citizenship. For its part, London faces an important challenge in this context, namely those who have lost their compass of orientation and no longer know about their homeland, and Britain is afraid of their secret infiltration into the country. Therefore, through its latest decision, the government wanted to solve the problems it faces in order to be able to revoke the citizenship of these citizens.

This opens talk about the international responsibility of these countries towards other countries that have been affected by their terrorist citizens, as human rights groups are arguing about the legality of revoking citizenship from remote citizens without investigating them and giving them an opportunity to defend themselves. As for human rights defenders in the Middle East, they argue about the responsibility of states towards the security of other countries.

In July, then-Austrian Interior Minister Karl Nehammer, now chancellor, approved laws that tighten control over extremists and cultural and religious centers to undermine the spread of terrorism in the country, in addition to placing an electronic bracelet on the ankles of those convicted of terrorism in the event of their conditional release in order to ensure close monitoring of their behavior for fear of repeating terrorist acts.

The Austrian government had previously approved another law banning symbols and slogans of extremist groups, including the Brotherhood, and on October 28, Vienna launched an international conference to combat terrorism intellectually and through security, to which it invited important worldwide experts in this field.