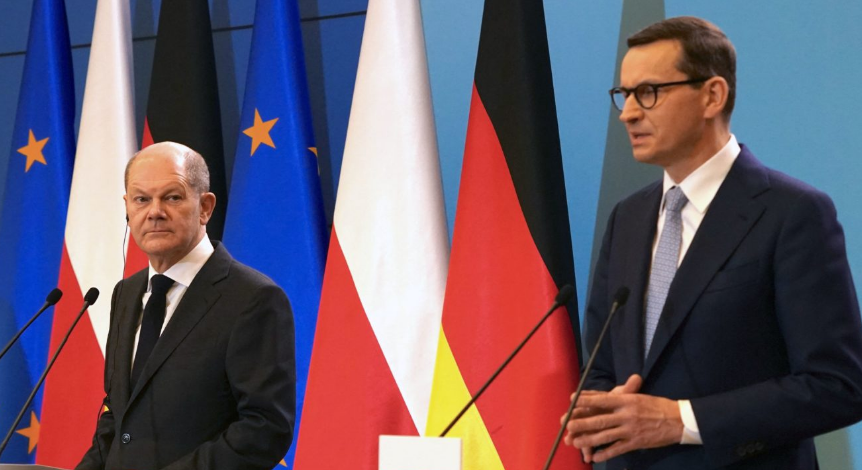 Leaders of Poland, Germany call for ‘swift’ solution to Warsaw’s rule of law row with EU

The leaders of Germany and Poland diverged on the Nord Stream 2 gas pipeline and war reparations during a meeting Sunday, but agreed on one key point: That rule of law talks between Brussels and Warsaw should be concluded as fast as possible.

“We would like to express our joint desire that the disputed issues be resolved as swiftly as possible … I have presented our perspectives and solutions to the chancellor and we will see how this develops,” Polish Prime Minister Mateusz Morawiecki told reporters in Warsaw after his first meeting with Olaf Scholz as Germany’s new chancellor.

Scholz emphasized the importance of “the rule of law and democracy” for the European Union and said this was why “it would be very good and helpful if the discussions and talks between the European Commission and Poland could soon lead to a very good and pragmatic solution.”

But that call for speed doesn’t mean Germany is throwing in the towel in its effort to get Poland to abide by the EU’s principles. Scholz added that Berlin “would very much welcome it if a common understanding can be reached between the Commission and Poland, and we therefore continue to be united as the European Union around these principles of democracy and the rule of law.”

The EU executive has clashed repeatedly with Warsaw over accusations that the ruling nationalist Law and Justice party has infringed the EU’s rule of law principles, including through controversial judicial reforms that critics say are aimed at putting courts under political control. The Commission has held back payments of Poland’s share of the €800 billion recovery fund over the dispute.

There was more unity on the looming threat that Russia poses to Ukraine.

“Everyone can rely on the fact that a violation of the borders is something that we cannot simply accept,” Scholz said.

However, the two differed in their stance on the Nord Stream 2 pipeline, which will deliver natural gas from Russia to Germany, bypassing Ukraine. Critics say it will give Moscow too much political leverage over Central and Eastern Europe.

Morawiecki argued the pipeline “increases the ability of the Kremlin to put pressure on Ukraine and the European Union …We’re very nervous about the scenarios that could take place after the opening of Nord Stream 2.” He added that other Eastern European countries could be “blackmailed” by Russia.

“That’s why I told the chancellor about the great risks involved in opening Nord Stream 2,” Morawiecki said.

Scholz defended the project, which is complete but still awaiting regulatory approval, saying Germany is actively working to rely solely on renewable energy, meaning dependence on Russian gas will decrease over time.

When asked about concerns that Russia could put pressure on Kyiv by cutting current gas transit through Ukraine once Nord Stream 2 is operational, Scholz said Germany “continues to feel responsible for ensuring that the gas transit business is a successful business for Ukraine in the future and will take care of that.”

Scholz’s Foreign Minister Annalena Baerbock — whose Green party is a junior coalition partner to Scholz’s Social Democrats — had a much more skeptical view, telling Germany’s ZDF television Sunday that the pipeline cannot be currently approved because it doesn’t meet EU energy laws and “there are still open questions about security.”

Moraweicki’s government wants Germany to pay massive reparations for the destruction it caused during World War II, but Scholz reiterated a long-held government line that there is no legal basis for such compensation.

“You know the German attitude,” he said. “We have concluded treaties that are valid and have settled the past issues and the compensation.”

Scholz said, however, that Germany “continues to be willing to pay very, very high contributions to the EU budget” of which Poland is a major recipient.

There was also disagreement over the EU’s Green Deal climate ambition — a crucial goal for Germany but one that coal-dependent Warsaw has reservations about. Morawiecki said “we do not want people to suffer as a result of such changes and tendencies,” accusing the bloc’s Emissions Trading System of contributing to the recent spike in energy prices.

Morawiecki blamed speculation on the EU’s Emissions Trading System for surging permit prices. He said he plans to make a proposal at Thursday’s European Council meeting to limit trading to entities receiving permits “in order to avoid speculation.”