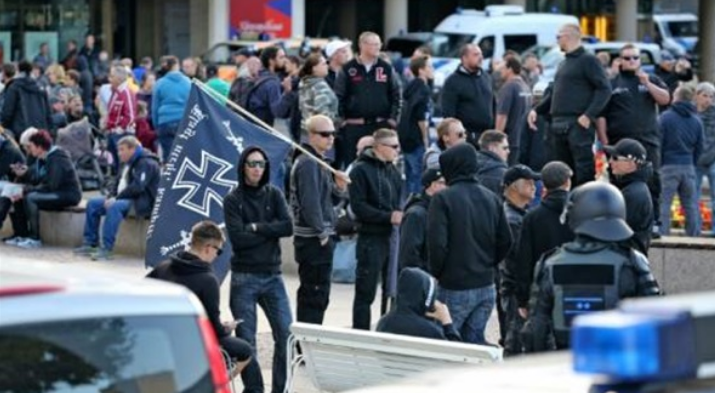 Far-right currents in the West have raised multiple problems over the past two years. Will the year 2022 carry tactical changes in the face of their advanced mechanisms and their renewed attempts to build sprawling networks between the countries in which they are languishing?

The far right has manifested a clear danger to the security of Western countries recently, leaving doubts about the organizational networks that it was able to build, in addition to the unity that these networks showed through goals and practices. These currents organized mass demonstrations in multiple locations, including Washington, Paris, Germany and elsewhere, to express their rejection of the production vaccines for the corona virus.

Far-right currents caused massive riots during 2021 through misleading information they spread about the corona virus and vaccines manufactured in order to eliminate it. In April, far-right neo-Nazi groups in Germany organized massive demonstrations, calling on their members to violate the quarantine decisions launched by the German government to limit the spread of the corona virus.

The neo-Nazis and other far-right groups in the West have also been spreading misinformation about the corona virus, as they described it as a conspiracy to eliminate the white race in favor of the spread of other races, which Western governments have repeatedly corrected. But the far right in Germany organized many demonstrations to denounce the intentions of the government, while in Romania dozens organized several demonstrations for the same reason.

Thus, far-right groups in the West dealt with the spread of the corona virus with different mechanisms, as some urged their followers to spread the virus among immigrants and minorities, while others spread misinformation about the virus and the reasons for its spread, which made them an additional burden on the shoulders of the security systems that worked hard to prevent the spread of virus.

Western security services are afraid of using the intelligence services hostile to extremist right-wing groups to cause riots in the streets and spread panic among the citizens of society and incite them to violate government laws, in addition to employing them as tools that threaten the security of the West.

The storming of Capitol Hill in Washington remained the most prominent scene of 2021 in general, as far-right groups stormed the US Congress building on January 6 to express their anger and rejection of Democratic candidate Joe Biden’s victory in the country’s presidential election against Republican candidate Donald Trump, which left deaths and injuries among the demonstrators.

What was shown by the scenes of violence practiced by the extreme right groups in the United States made Western governments more cautious and ready to confront the trend in the coming years. On the other hand, Canada classified some of its right-wing groups as terrorist groups for fear of the relations that these groups build with each other online.

In the United States, the government announced on May 11 the launch of a new department in the intelligence community to confront domestic terrorism so that law enforcement authorities could combat the far right and tighten control over its groups, both on the ground and online.