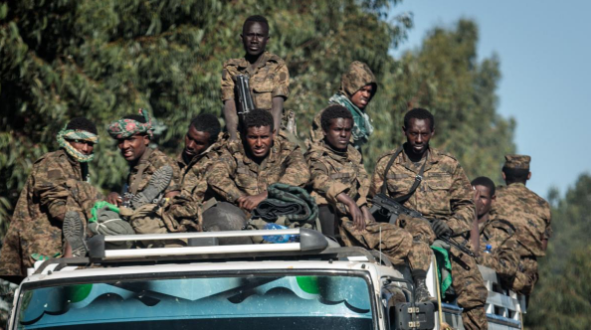 Large quantities of emergency food parcels have been looted at gunpoint by rebel forces in Ethiopia, prompting the United Nations to suspend distribution to those left hungry in the year-long civil war.

Supplements for malnourished children were among supplies stolen when small-scale theft from World Food Programme (WFP) warehouses in the Amhara region escalated into mass looting.

The culprits were primarily identified as fighters, as well as members of the local population, who threatened aid workers.

The lawlessness will worsen the humanitarian catastrophe unfolding in northern Ethiopia, where an estimated 9.4 million people across the Tigray, Amhara and Afar regions are in urgent need of food, Stéphane Dujarric, the UN’s spokesman, said.

Approximately 200 children under the age of five have died of starvation since June in Tigray, according to hospitals in the region, which was cut off by fighting between pro-government troops and local forces.

The WFP also lost three trucks used for humanitarian operations after they were commandeered by the military.

Aid workers have met with intimidation from both sides of the fighting while attempting to reach those in need. “Such harassment of humanitarian staff by armed forces is unacceptable,” Dujarric said.

The conflict has killed thousands of people and forced millions to flee their homes in Tigray, and more recently Amhara. Atrocities committed by both sides include the massacre of civilians, extreme sexual violence and the weaponising of food.

The violence has reignited regional and ethnic tensions that now threaten Ethiopia’s disintegration under Abiy, who was awarded the Nobel peace prize in 2019.

After suffering unexpected losses to advancing enemy forces Abiy, a former soldier, has spent time on the front line alongside his troops, and has urged ordinary citizens to take up weapons.

The government this week claimed it had retaken two strategic towns from rebel fighters, and was regaining momentum after a string of major defeats.

The United States said that the crisis remains an “absolute priority”, as it repeated calls for the parties to negotiate an end to fighting.

“On the one hand we are encouraging, but also on the other hand we do have a set of sticks,” Ned Price, the State Department spokesman, said, referring to the option of extending sanctions like those imposed on Eritrea, Ethiopia’s neighbour, last month.