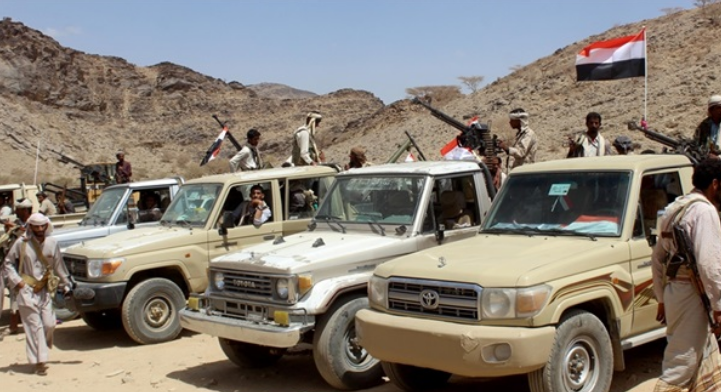 In a new step that would deter the terrorist Houthis, the Arab Coalition to Support Legitimacy in Yemen announced the implementation of 48 targeting operations in Marib and Al-Jawf against the Iranian-backed militia within 48 hours. On Saturday, December 18, 19 operations were carried out in Marib and Al-Jawf, which resulted in the killing of 80 terrorist elements.

The coalition said that it carried out 29 qualitative targeting operations against the Houthis in Marib and Al-Jawf on Friday, December 17, during which they destroyed 20 militia vehicles and caused human losses of more than 180 terrorist elements.

In addition, the Houthi militia retreated from sites in the Ramleh area in Marib after the battles with the National Army and the coalition forces, while a site for launching drones was destroyed north of the city of Al-Hazm in Al-Jawf Governorate, where the strikes destroyed the launch pads, communications and warehouses for the drones, according to the coalition forces.

The official spokesman for the Yemeni armed forces, Brigadier General Abdo Majali, said that the terrorist militia is still mobilizing means of killing and destruction against the people, but all their attempts will be defeated.

Majali explained in a press briefing that the army, the popular resistance, and the tribesmen are continuing combat operations and are dealing with terrorist elements on the southern and northwestern fronts of Marib Governorate, adding that offensive and defensive combat operations have made progress on the ground against the Houthi militia in several areas, the most important of which is the areas of Wadi Dhana, Al-Amoud, Al-Arif and Al-Failha in the district of Al-Jubah, and Umm Reesh and Mala’a in the Harib district.

He confirmed that the operations in the southern locations, the outskirts of eastern Al-Balaq, ended with the elimination of the infiltrating Houthi elements. The combat battles, the operations of tight ambushes, and the detour and encirclement on the various southern fronts resulted in the restoration of important and strategic sites and the destruction of equipment and weapons belonging to the Houthi militia, while dozens of terrorist elements were killed, wounded and arrested. The army forces also recovered a number of crews, combat vehicles, and various weapons and ammunition.

Majali said that the militia’s losses on the various fronts in Marib are estimated at six armored vehicles and seven combat crews, in addition to the human losses in the militia’s ranks due to army artillery fire.

He pointed out that the coalition’s aviation carried out several airstrikes, which resulted in the destruction of a 52T tank, a 23m T gun, eight armored vehicles, a BMB vehicle, and ten combat crews carrying weapons, equipment and reinforcements for the Houthi militia.

Majali pointed out that the army forces continued offensive hostilities and ambushes against the militia on the fronts of Al-Jawf Governorate, which focused on Al-Jadafer, Bart Al-Anan, and Al-Alam.

In Hodeidah Governorate, the joint forces and the resistance, backed by coalition fighters, were able to secure the entirety of the mountainous areas surrounding the Hays district on the fronts of Hays, Jabal Ras, and Al Jarahi, while the engineering teams continue to remove the Houthi-planted mines in Hays from public roads. mosques, schools, homes and farms.

Majali said that the forces in the Taiz axis carried out counter-attacks on the Houthi militia’s positions on the northern and western fronts of Taiz Governorate, and those battles resulted in human and material losses for the militia. He explained that the joint forces and the resistance carried out offensive operations in the Maqbanah district in western Taiz Governorate, during which strategic areas were liberated, the most important of which are the villages of Al-Shateen, Al-Sawaiti, Al-Muqasa’, Al-Qari, Al-Nuba, Al-Aqfiya, Al-Jarari, and Hadiya, in addition to the mountain ranges in the Shamir region.