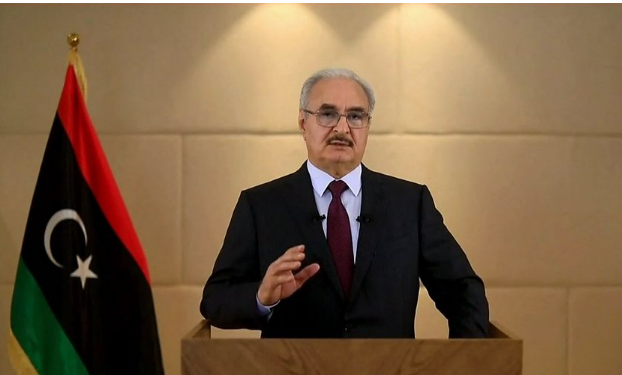 Libyan Militia Leader Says He Will Run for President

Libya’s Khalifa Haftar said Tuesday that he plans run for president as the Russian-backed militia leader attempts to take political control of the entire country after a failed military campaign to seize the capital.

Mr. Haftar registered his candidacy in Benghazi, the country’s second-largest city and a stronghold for the military commander, whose militia forces control a swath of eastern Libya. His 14-month offensive to oust the internationally-recognized government in Tripoli ended in a United Nations-brokered truce last year.

“I’m not seeking power but I’m looking to lead my people toward prosperity,” Mr. Haftar said in a short televised statement broadcast from Benghazi after he submitted the paperwork for his candidacy, according to local media.

He promised to bring national reconciliation and unity to the country and urged Libyans to vote for him.

Mr. Haftar’s entrance to the race is likely to further polarize the country. While he enjoys some support among residents of eastern Libya who credit him with restoring security, he is opposed by many Libyans including people in Tripoli who endured more than a year of shelling by his forces.

Libya is set to hold a presidential election on Dec. 24 that could determine the fate of peace efforts in the oil-rich North African country, which has been torn apart by war and political crisis since the 2011 ouster and death of dictator Moammar Gadhafi. The crisis created a route for illegal migration to Europe, and enabled the terror groups Islamic State and al Qaeda to gain a foothold.

Vice President Kamala Harris and other world leaders gathered in Paris late last week to make a diplomatic push in support of the coming elections. Some Western officials fear that a dispute among rival Libyan factions over the election’s timing, legal basis and rules threatens to unravel last year’s cease-fire.

The country has been split between several governments and multiple militias since 2014, when a transition to democracy that began after the ouster of Gadhafi in 2011 unraveled.

The deep involvement of foreign powers with competing interests has further complicated the country’s political fault lines. Mr. Haftar is backed by Russia, Egypt and Gulf countries, who view him as a bulwark against extremists and have offered him military support in the past. Turkey has sent armed drones, air defenses and Syrian fighters to help Libya’s internationally recognized government in Tripoli fight back against Mr. Haftar.

Mr. Haftar is a former general in Gadhafi’s army who later joined a CIA-backed campaign against the regime. He has since carried out a unilateral military campaign that destabilized Libya for years while providing a modicum of security in the country’s east. He is also battling civil litigation in the U.S. over alleged war crimes committed by his forces. The International Criminal Court issued an arrest warrant for one of his lieutenants for alleged summary executions. Mr. Haftar and his lieutenant deny wrongdoing.