Latest Posts
22:04
Home Islamist Movements Iraqis Return From Belarus, but Some Say They Will Try Again to Reach the E.U. 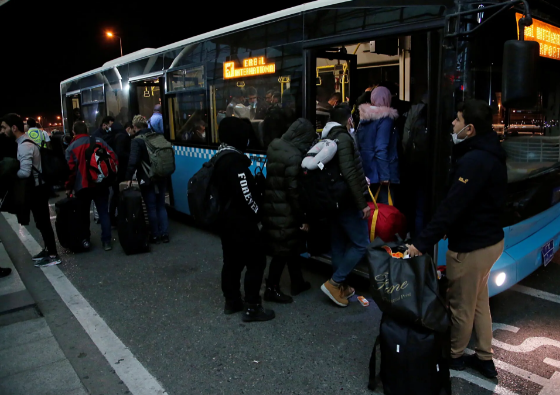 Iraqis Return From Belarus, but Some Say They Will Try Again to Reach the E.U.

Iraq repatriated a second wave of more than 600 migrants from Belarus on Friday after they gave up, at least for now, on a disastrous attempt to try to reach the European Union via its eastern borders.

Two Iraqi Airways charter flights landed before dawn in Erbil, the capital of the Kurdistan region, then went on to the national capital, Baghdad. At the Erbil airport, a few dozen relatives waited quietly for their family members to emerge, then rushed forward to embrace them tearfully.

One of the returning migrants, Shaho Omar, 27, said he and his friends had been trying to reach Germany and then go on to Britain. But they abandoned their plans after hearing that at least 27 migrants died on Wednesday in a failed attempt to cross the English Channel from France to Britain aboard a flimsy inflatable boat.

“What happened to them could have happened to us — that shocked us,” he said, adding that rough treatment by the Belarus border police and the free flight home offered by Iraqi authorities had persuaded him and others to leave.

“The police took our money, they took our phone. They took our food and then came back later and offered to sell it back to us,” Mr. Omar said, referring to the Belarusian officers. “We didn’t even have enough money to buy it back.”

Thousands of Iraqis, many of them Kurds, have been caught up in a new migrant crisis in Europe. E.U. officials accuse Belarus of precipitating the crisis by loosening its visa rules in the summer and encouraging desperate asylum seekers to go to the borders of the European Union, then pushing them across in an attempt to punish the bloc for imposing sanctions on Aleksandr G. Lukashenko, the autocratic Belarusian president.

Mr. Lukashenko, who has led the country for three decades, threatened the European Union in May to “flood” its member states with migrants after it imposed sanctions on him following the forced downing of a plane carrying a Belarusian dissident.

Once they reached Belarus, many of the migrants became stranded in the forests of the region without shelter from the cold, food or water. At times, they were thrust into dangerous confrontations as they tried to make it into Poland, Lithuania or Latvia, all members of the European Union.

Mr. Lukashenko told migrants at the Belarusian border with Poland on Friday that his country would help them go home if they wanted to, but would not force them. Addressing them directly through an interpreter, he said Belarus would provide them with warm clothing and food if they chose to stay.

It was his first public appearance at the border since the start of the crisis. He visited a facility providing migrants with food and spoke to Red Cross workers at the camp.

Some migrants have reported being deported from Belarus against their will, including Iraqis sent to neighboring Syria.

In Iraq, the transportation ministry said it had repatriated 608 people on two flights on Friday and has now brought back a total of 1,038 Iraqis from the Belarusian capital, Minsk, after an initial evacuation flight on Nov. 18. But it is not clear how many of the migrants remaining in Belarus will agree to leave voluntarily, with some saying they might want to stay after they borrowed thousands of dollars to pay smugglers to get there.

Iraq’s foreign ministry said it has scheduled two more evacuation flights from Minsk on Friday night to Erbil and Baghdad, which would bring the total number of voluntary returnees to almost 2,000 people.

The Iraqi migrants say they are desperate to escape a country where they don’t see a future, where jobs are scarce and corruption is widespread. In the semiautonomous Kurdistan region, political and economic power is tightly held by two main political dynasties.

Mr. Omar, a Kurd, came from the northern city of Kirkuk, which sits at the heart of Iraq’s northern oil fields and is a disputed territory historically claimed by Arabs, Kurds and Turkmen. He said life was difficult there for Kurds after the Iraqi army retook the city from Kurdish forces four years ago and that he planned to find a different route to Europe and try again after working to save up money.

“If I find a better and safe route, I will definitely try again,” he said. “For now there are no routes — that’s why I came back.”

Mohammed, a friend of Mr. Omar, said the Belarus police in recent days had not been actively sending migrants at the border into Poland, but instead had tried to provoke them into storming the border. Like several others among those returning, he asked to not be identified by his full name for fear of repercussions from Iraqi or Kurdish authorities.

“Their main goal was to turn us into beasts,” said Mohamed, who is also from Kirkuk. “If a person doesn’t have any food or a place to sleep, they will storm Poland.”

Another migrant, Anjam Azad, from Erbil, said he saw Belarus police getting a group of more than a dozen young men in the forest to make ladders from tree branches to try to scale a fence at the Belarus border with Poland.

Ahmed, 22 and also from Erbil, said he still planned to try to get to Britain, but would wait until summer and try the sea route from Turkey to Greece. Dressed in a black jacket with the hood up, he leaned on a crutch as he spoke.

He said his leg was broken when he was beaten by Belarusian forces and attacked by guard dogs near the border. But he could not seek medical treatment for his injuries because his visa had expired, he added.

“I will still try to go back through the Aegean Sea,” he said, referring to the smuggling route from Turkey to Greece. “Even after all I went through, I will go back because it’s worse here.”

He lowered his voice and leaned in to whisper when asked why he had left.

“You know who this place is for,” he said, alluding to the powerful families who control the Kurdistan region. “It is not for us.”

Up to 15,000 migrants remain in Belarus, the European Commission estimated on Tuesday, with about 2,000 near the European Union’s borders, adjacent to Poland, Latvia and Lithuania. Since the beginning of the year, Poland has registered more than 37,000 illegal border crossing attempts, according to Polish border guards.

Hundreds are still trying to cross every day. On Thursday, Polish police said that 230 migrants had broken through a border fence with the assistance of Belarusian border guards on Wednesday night, but had been sent back. More than 300 were been apprehended trying to cross on Tuesday.

About 100 men being held at a facility for detained migrants who crossed the border rioted on Thursday, demanding to be released, according to Polish media reports. Poland’s border guards said Thursday night that the situation had been brought under control.

The media reports said that the group came out of the building where they were being held, shouting “freedom” and that they wanted to reach Germany. They tried to break through a fence and also smashed windows at the facility and started fires.

About half of the 600 people being held at the facility, which is at a military training ground in the village of Wedrzyn, are Iraqis. The center there was in the process of preparing a flight to Iraq to repatriate a few dozen men who had not been permitted to remain in Poland.

President Andrzej Duda of Poland told reporters on Thursday that the Belarusian regime had changed its “method.” He said the authorities had relocated migrants to heated warehouses, and were letting migrants try to cross the borders in smaller groups during nighttime.