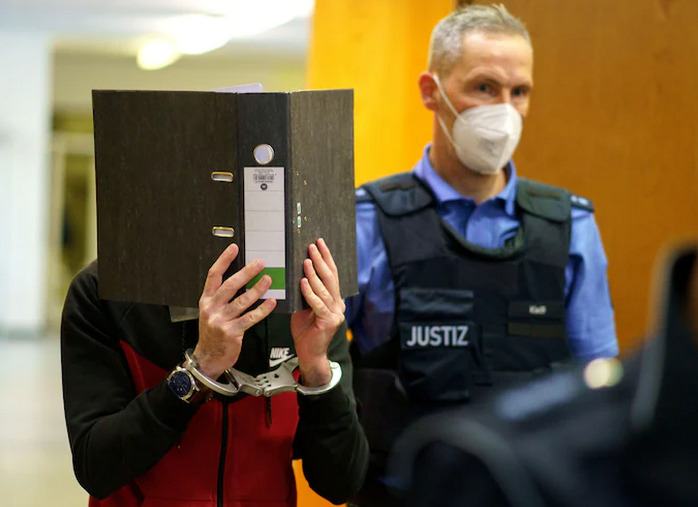 A German court sentenced a former Islamic State member on Tuesday to life imprisonment for the killing of a 5-year-old Yazidi girl at his home, marking the first conviction for committing genocide against members of the minority religious community.

Taha al-Jumailly, 29, an Iraqi citizen, was also found guilty of genocide and war crimes resulting in death at the court in Frankfurt. He was ordered to pay the child’s mother $57,000 in damages.

His 30-year-old German wife, Jennifer Wenisch, was sentenced last month in a separate trial to 10 years in prison in relation to the killing.

According to the indictment, Jumailly joined the Islamic State sometime before March 2013. He and his wife were accused by prosecutors of purchasing the child, Reda, and her mother as “slaves” when they lived in the Islamic State-occupied Iraqi city of Fallujah in 2015. Both Reda and her mother were subjected to violent beatings and other abuse by Jumailly.

The child’s mother, who was represented by well-known rights advocate Amal Clooney, gave evidence in both trials. She described how Jumailly tied her daughter to a window grill outside the home as punishment after she wet her mattress, where she then died of thirst in the heat in temperatures that reached 124 degrees.

The landmark ruling gives a small glimpse of accountability in relation to the Islamic State’s attempts to wipe out and enslave Iraq’s Yazidis after the group took over vast swaths of the country in 2014. As the militants swept through villages around the Yazidi ancestral home of Mount Sinjar in northern Iraq, they slaughtered men and dumped them in mass graves and rounded up women and children to be bought and sold as slaves.

In May, the United Nations said it had found “clear and convincing” evidence that the Islamic State had committed genocide against the Yazidi minority. Women were subjected to serial rape and other forms of “unendurable sexual violence,” it said.

“This is the moment Yazidis have been waiting for,” Clooney said. “To finally hear a judge, after seven years, declare that what they suffered was genocide. To watch a man face justice for killing a Yazidi girl — because she was Yazidi.”

She said she had been in awe of her client’s courage.

The woman, who is now in a witness protection program in Germany, was from the northern Iraqi village of Kocho near the foot of Mount Sinjar, once home to around 1,700 Yazidis. She had been captured with her daughter by the militants in the summer of 2014, according to court documents.

After being bought by the defendant, the mother and child were held for several weeks in the house in Fallujah, the court records said. The accused forced them to participate in prayers and renamed the child “Rania.”

The defendant “punished” them on various occasions and sometimes without a specific reason — particularly with corporal punishment, the court documents said.

At one point, Jumailly “loaned” Reda to a male acquaintance overnight, the documents said.

Court documents said that after he left Iraq for Syria in 2018 he had been in touch with another Islamic State member about manufacturing explosives. He left Turkey for Greece in 2018, where he was arrested the following year before being extradited to Germany.

The prosecution used the principle of “universal jurisdiction,” which allows for the pursuit of crimes committed overseas when charges are deemed sufficiently grave. Germany has become a hub for such prosecutions, with more than a million refugees who arrived during 2015 bringing witnesses, victims and perpetrators to the country. The verdict is subject to appeal.

In addition to Jumailly and Wenisch, German courts have convicted three other former Islamic State members of aiding and abetting crimes against humanity against Yazidis