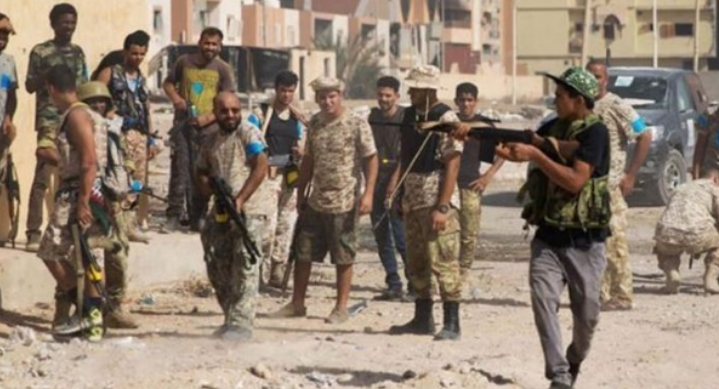 The specter of division hangs over Tripoli’s terrorist militias shortly before the start of the Libyan presidential elections, which are scheduled to be held on December 24.

In the latest pictures of the split between militias in western Tripoli, a Brotherhood leader was assaulted by gunmen, in an incident that revealed the hidden conflict between the militias.

According to the Libya 24 News website, Brotherhood leader Mahmoud Abdel Aziz al-Werfalli, a former member of the General National Congress, was assaulted by members of armed militias in the Abu Salim district of Tripoli.

Although Werfalli was beaten by members of armed militias, the High Council of State headed by Brotherhood leader Khaled al-Mishri, in addition to the terrorist Libyan Fighting Group, condemned the incident in a paradox that reveals divisions within the militia camp in Tripoli.

Werfalli is exploiting his program on the Al-Tanasuh channel, which is affiliated with exiled Brotherhood mufti Sadiq Al-Ghariani, to alienate Libyans from the elections, as he described the election laws as “flawed” and called for their suspension.

The attempt of a former General National Congress member to hand over electoral cards to people who did not receive them, for which he was beaten, was considered by the High National Elections Commission in Libya as an interference in its affairs and an infringement of its powers.

At the end of June, the Al-Far militia in Al-Zawiya led by Mohamed Bahron, who is one of the militia leaders close to Mishri, launched an attack on the city of Al-Ajaylat in western Libya as part of a Turkish-Brotherhood scheme to establish a “militia belt” in Tripoli and to expel militias that do not owe allegiance to the Brotherhood and Turkey.

Bloody clashes took place at the time between the Al-Far militia and the Mohammad Baraka militia, also known as Al-Shalfouh, the most prominent of the militias in the city of Al-Ajaylat.

In July, Tripoli witnessed conflicts and defections of militias, as the city of Al-Zawiya witnessed armed clashes between the militia led by Bahron, the Nasr militia led by Mohamed Kashlaf al-Qasab, known as “the Emperor of Smuggling”, and Caboat militia led by Ruby, near the Zawia refinery and Rakina Island.

In those clashes, medium and heavy weapons were used, and the militias closed the roads next to the Yarmouk camp south of Tripoli, amid security tension that ignited an armed clash between the militias.

The High Electoral Commission said in a statement that carrying out the investigation and interrogation process for members of the electoral center committees and filming inside them without the authority that carried out such practices approved by the Commission is in violation of the provisions of the regulations for media representatives attached to the decision of the Commission Council, which clarifies conditions and procedures for accrediting local and international media representatives and clarifies their rights and duties so that they can carry out their duties in accordance with the regulating laws and legislation.

The Commission called for contributing to the achievement of this “historic entitlement”, rejecting violence, hate speech and sedition, and spreading a spirit of optimism and positivity, saying, “Today, without exception, we are facing a difficult test.”