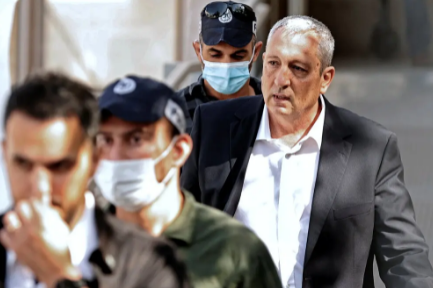 The slow-burning corruption trial of Benjamin Netanyahu shifted back into Israeli public consciousness on Monday with the first appearance of a state witness crucial to the prosecution of the former leader, Israel’s longest-serving prime minister.

The witness, Nir Hefetz, a one-time government spokesman and later a trusted aide to the Netanyahu family, testified about his role in the relationship between Mr. Netanyahu and the owners of a major news website and telecommunications company while he was in power. The prosecution’s case hangs on proving that the owners at the time, Shaul and Iris Elovitch, routinely allowed Mr. Netanyahu’s family to influence their website’s political coverage in exchange for lucrative regulatory benefits provided by him.

Mr. Netanyahu has pleaded not guilty to the charges. But if such an exchange took place, Mr. Hefetz would have been in a direct position to know. As the Netanyahu family’s mouthpiece from 2014, Mr. Hefetz was an innermost member of the Israeli leader’s circle, before turning on the family in 2018 by signing a state witness deal with the prosecution.

From early 2015, according to the indictment, Mr. Hefetz was the principal conduit between the family, the Elovitchs and the editors at Walla, the news website — making him a potentially damning witness.

Mr. Hefetz’s appearance is a reminder of the relevance of a trial that was, until Mr. Netanyahu lost power in June, at the heart of a constitutional crisis that elevated concerns about the health of Israeli democracy and the legitimacy of Mr. Netanyahu as prime minister. The trial contributed to a political stalemate that led to four elections in two years.

Unlike previous leaders accused of corruption, Mr. Netanyahu refused to step down after having been indicted in 2019, instead presenting himself as the victim of a biased judicial system. In doing so, he was accused of having created a harmful showdown between the executive and the judiciary branches that undermined public trust.

His intransigence also raised questions about whether the trial would diminish his energy to govern effectively, or if he might use his position to influence the outcome — for example, by replacing the attorney general with someone more likely to abandon the prosecution.

The case contributed to a split among Mr. Netanyahu’s right-wing political alliance, leading some former colleagues to form a rival coalition with centrists and leftists that forced him from office in June.

His departure from power diminished the gravity of some of these questions, while the granular and technical testimony by earlier witnesses made proceedings difficult to follow.

The centrality of Mr. Hefetz to the prosecution’s case, and the rare window he offers onto Mr. Netanyahu’s life, has given the trial added energy, according to spectators in the cramped courtroom who have attended since the start.

“The previous witnesses were not directly connected to Netanyahu,” said Tamar Almog, legal affairs correspondent for Kan, the Israeli public broadcaster. “They couldn’t testify as to what Netanyahu wanted, meant or knew — while Hefetz’s testimony is meant to clarify Netanyahu’s intentions and actions.”

Mr. Hefetz’s testimony will likely last weeks if not months, but already on Monday he had begun to throw light onto Mr. Netanyahu’s inner life.

With his former boss sitting a few yards away, Mr. Hefetz told the courtroom that Mr. Netanyahu had been an excessive “control freak” regarding media coverage, and that he had spent as much time on that as on security affairs, “including on matters an outsider would consider to be nonsense.”

Mr. Netanyahu was so punctilious, Mr. Hefetz said, that “you can’t get a punctuation mark out without his authorization.”

Mr. Hefetz recalled having acted as a message courier between the Elovitchs and Netanyahus, particularly during the buildup to a general election in 2015. Mr. Hefetz said he had relayed requests from Mr. Elovitch in which he asked Mr. Netanyahu to secure a favorable regulatory environment for a merger between two companies part-owned by the Elovitchs.

Among other requests, the witness said, Mr. Elovitch had suggested that Mr. Netanyahu assume personal responsibility for the Communications Ministry, which was overseeing the merger.

The indictment lists more than 300 incidences of demands made by the Netanyahus for specific changes to coverage on the Elovitchs’ news site between 2013 and 2016 — demands that were mainly delivered by Mr. Hefetz.

“Netanyahu had the greatest control over the Walla website, including what the headline would be, where it would be on the home page,” Mr. Hefetz said.

The demands, he said, reached fever pitch in the run-up to the 2015 election, with multiple requests per day, and ranged from what appeared to be grave political intervention to more frivolous matters.

On Election Day itself, Mr. Hefetz said, he had conveyed a demand for the Walla site to place on its home page a now-notorious video in which Mr. Netanyahu rallied his base by expressing alarm that right-wing rule was in danger because Arab voters were “being bused to the polling stations in droves” by left-wing organizations. Denounced as racist, Mr. Netanyahu later apologized for the remarks, which he had also posted on his Facebook page.

Mr. Hefetz was assigned a few weeks later with conveying a demand for coverage of Yair Netanyahu, the prime minister’s elder son, and his new girlfriend, which, according to the indictment, “included a request to dispatch a paparazzi photographer.”

As part of the inner sanctum, Mr. Hefetz also appeared to have played a role in attempting to obstruct justice. In December 2016, the indictment stated, as reports were emerging about an investigation into Mr. Netanyahu’s relationship with Mr. Elovitch, Mr. Hefetz requested an urgent meeting with the Elovitchs and expressed worry about the cellphone correspondence between them. They all agreed to get new phones and to “disappear” the old ones.

Most of the phones disappeared, according to Micha Fettman, a lawyer who was formerly on Mr. Netanyahu’s defense team. Mr. Hefetz’s phone was “stolen” while the Elovitchs’ phones “fell into the pool or got eaten by a dog” or were upgraded to new ones, Mr. Fettman said on Israeli television last week.

Many commentators said the new revelations, while juicy, were unlikely to alter Israeli public perceptions of Mr. Netanyahu, since most people already had formed a position.

A plea deal might force Mr. Netanyahu to leave politics, while a guilty verdict might mean prison time for him. But as the trial proceeds, it is unlikely to influence how Israelis vote, said Nahum Barnea, a columnist for Yediot Ahronoth, a centrist newspaper.

“It’s like Trump — people already have an opinion about the guy,” Mr. Barnea said. “It doesn’t affect the public pulse.”