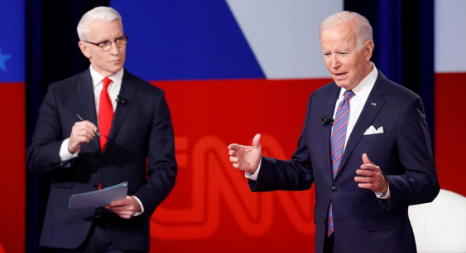 President Biden has declared that America is committed to defending Taiwan if China were to attack the self-governed island, in an apparent departure from Washington’s long-stated policy of “strategic ambiguity”.

Asked if he would “vow to protect Taiwan” and what he would do to keep up with China’s military advances, including recent tests of hypersonic missiles, the president responded: “yes and yes.”

He added that there was no need to “worry about whether they’re going to be more powerful” because “China, Russia and the rest of the world knows we’re the most powerful military in the history of the world”.

A White House spokesman later insisted the president was not announcing any change in US policy, but China urged Washington to tread carefully in response to Biden’s remarks, which came at a town hall event organised by the broadcaster CNN.

“China has no room for compromise on issues involving its core interests,” said Wang Wenbin, China’s foreign ministry spokesman, adding that Washington “should act and speak cautiously on the Taiwan issue.”

Taiwan’s presidential office has said that it would neither give in to pressure nor “rashly advance” when it gets support.

“Taiwan will show a firm determination to defend itself,” said Xavier Cheng, the presidential spokesman. He also acknowledged the Biden administration’s continued show of “rock-solid” support for Taiwan.

The US government, which has official ties with Beijing, accepts the “one China” policy but opposes any forced seizure of the island, which broke away from the mainland in 1949 after a bloody civil war.

Washington has a security pact with Taiwan to supply the island with military hardware and technology, but has deliberately not confirmed if it would send troops to defend the island in what is known as the policy of “strategic ambiguity”, which is aimed at keeping the status quo.

Tensions have recently flared in the Taiwan Strait, with the Chinese military flying unprecedented numbers of planes near to the island’s airspace, staging war games and building up nearby air bases.

Earlier on Thursday, before Biden’s town hall, Zhang Jun, China’s UN ambassador, accused the US of “taking dangerous actions, leading the situation in the Taiwan Strait into a dangerous direction”, after the latest transit of US and Canadian warships through the strait.

China has never given up the use of force as an option to seize the island to achieve national unity, and President Xi has suggested reunification should be achieved by 2050, when his country realises the dream of “national revival”.

At last night’s event, Biden was asked a second time by the CNN anchor Anderson Cooper if the US would come to Taiwan’s defence in the event of an attack.

“Yes, we have a commitment to do that,” the president replied.

“The military expansion and provocative acts by China has made US and more and more democratic countries highly wary,” said Joanne Ou, a spokeswoman for Taiwan’s foreign ministry. “Our government will continue to strengthen its self-defence abilities and safeguard Taiwan’s democracy and freedom, national security and people’s wellbeing.”

“The island’s society must be warned that they better not believe the ‘rock solid’ promise of the US, because Washington will never fight to the death with the Chinese mainland for the island’s secession,” an editorial in the Global Times declared. “All it is doing now is playing geopolitical tricks.”

China, on the other hand, had the determination to “smash the US’ so-called ‘rock solid’ commitment with its iron will,” the newspaper said.

The White House is right: President Biden has not actually changed policy on whether Washington would defend Taiwan against a Chinese attack (Catherine Philp writes).

What he has come close to is abandoning the decades-long policy of strategic ambiguity in which American defence of Taiwan is assumed but not spoken of.

Strategic ambiguity is credited for keeping the peace in the Taiwan Strait for four decades since the American military withdrew from the island.

The policy is designed to discourage Beijing from taking military action to reunite Taiwan with the mainland but also to discourage Taipei from a unilateral declaration of independence.

Under the Taiwan Relations Act, which was passed when Washington normalised relations with Beijing in 1979, the US provides Taiwan with the military support to defend itself, in the form of arms sales, but does not bind Washington to a formal defence alliance.

As tensions rise between Washington and Beijing, with Taiwan central to them, some have urged Biden to make it more explicit what the price of war would be. Some have urged that this take the form of a new policy of “strategic clarity” in which Washington’s intentions are clearly stated, to deter China from taking actions.

Others, however, warn that abandoning strategic ambiguity might embolden China into taking action sooner rather than later, embroiling Washington in an unthinkably destructive conflict.

Taiwan, led by the explicitly pro-independence President Tsai, embraced Biden’s remarks as evidence of his “consistent rock-solid support” for the island.

If Biden simply said out loud what is already a given, that is not a change in material support for Taiwan. Yet even if accidental, it may start to erode the credibility of strategic ambiguity, without coming as close as strategic clarity demands. Perhaps that is ambiguity enough.