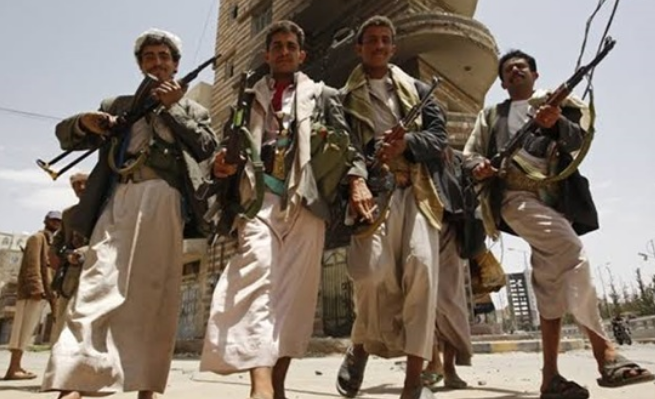 The anniversary of the celebration of the Prophet Muhammad’s (peace and blessings be upon him) birthday in Yemen did not pass with joy and rejoicing as is customary in all Arab and Islamic countries, as the Iranian-backed Houthi militia did not hesitate to commit violations against the Islamic religion on that anniversary.

During the Houthi’s celebrations of the Prophet’s birthday on October 19, which the militia set up in Al-Sabeen Square in Houthi-controlled Sanaa, activists circulated pictures of the celebration banners with the names of the Prophet Muhammad and Allah written on it lying on the ground of the square and trampled on, in a clear intention by the militia to insult religious sanctities.

Not only that, but Yemeni media revealed that a number of Houthi elements forced the owners of food shops in Sanaa to provide free meals to all participants in the celebrations.

In the militia’s celebrations of the Prophet’s birthday every year, the occasion is transformed into a political festival to promote the Houthis’ right to rule. General People’s Congress leader Kamel al-Khoudani said on his Twitter account, “The banners placed by the Houthis in the streets bear a picture of Abdul-Malik al-Houthi on one side with ‘And we have only sent you as a mercy to the worlds’ written about it, and on the other side is a picture of Hussein Badreddin with ‘You are of great character’ written on it,” indicating that this is an electoral festival for the House of Badreddin al-Houthi.

Yemeni political analyst Mahmoud al-Taher explained that this proves that the Houthis have nothing to do with the Prophet’s birthday, nor with the Prophet himself, peace and blessings be upon him, and that they take religious occasions for political and economic goals. Politically, they gather the people under the pretext of celebrating the Prophet’s birthday or any other religious occasion to demonstrate in front of the world that this is a popular referendum on them, knowing that the people are forced to come out at gunpoint, as reported by many of those who went to the public squares.

In an exclusive statement to the Reference, Taher said, “As for economically, they force all families to pay sums of money, and they collect the equivalent of almost $100 million on every occasion. This is a huge amount, which is distributed to the Houthi leadership, financing their battle fronts.