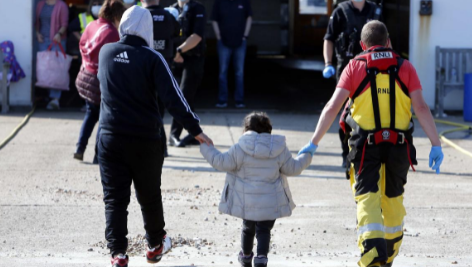 France last night accused the British government of not having paid “one penny” of the €63 million (£53 million) it has pledged to fight migrant traffickers in the Channel, adding to an escalating war of words between London and Paris that has encompassed everything from fishing rights to submarines.

Speaking during a visit to the coast near Calais to meet French police, Gérard Darmanin, the country’s interior minister, told reporters: “The [British] government has not yet paid what it promised us. We call on the British to keep their promise of funding, since we are manning the border for them.”

He reiterated his claim to Sky News: “The UK has not paid one penny to us. They promised and still haven’t paid.”

Darmanin said that France was “an ally of Britain” but “not its vassal”. He also called for Britain and the European Union to negotiate a “treaty on migration issues”, saying he regretted that there had been no such agreement as part of the Brexit talks led by Michel Barnier, the EU’s former chief negotiator.

Darmanin said France would attempt to do this after it takes over the EU’s six-month rotating presidency at the start of next year. He insisted that the percentage of illegal crossings stopped by the French had risen from 50 per cent to 65 per cent in the past three months.

The minister’s attack came despite claims that French police and border guards had not done enough to stop the growing numbers of migrants crossing the Channel to England this year. Priti Patel, the home secretary, has been told by some Conservative MPs that Britain should withhold its money — which her opposite number has now said has not been paid anyway.

The suggestion that the French had not done enough was lent weight by an Iraqi migrant interviewed by Sky News on the beach in Dungeness yesterday, just after he came ashore as part of a group of about 40 people — including a baby only a few weeks old. The man, who was not named, said French police had stood by as they set off in a dinghy meant for just ten people on what turned out to be an eight-hour crossing. The baby that landed with the group was a girl called Ayyan, believed to be two to four weeks old, according to Sky News.

By contrast, Darmanin praised the “courage and commitment of the police and gendarmes who fight against illegal immigration and criminal networks of smugglers under extremely difficult conditions”. The minister added: “We owe them the greatest respect.”

A record number of illegal immigrants have crossed by sea from France to the coast of southeast England this year, further undermining Anglo-French relations — already at a low not seen for decades. The total number of crossings this year stands at more than 17,200, dwarfing last year’s record of 8,420.

In recent days, France has threatened retaliation — which could include cutting supplies of energy — in a dispute over Channel Island fishing rights, claiming that Britain has not granted its fleet the number of licences it should have done under the terms of the post-Brexit deal negotiated last December.

The French government is also furious over the UK’s role in Australia’s decision last month to cancel a €56 billion deal for 12 French diesel-electric submarines in favour of more sophisticated nuclear boats from Britain and the US instead.