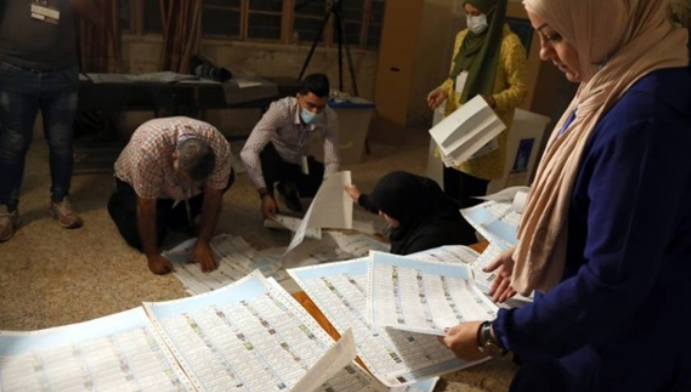 The Iraqi street has reached the height of boiling after the political forces and armed factions rejected the results of the recent parliamentary elections and the followers and supporters went to the public squares to demonstrate. Baghdad, Basra and Wasit governorates witnessed massive demonstrations by armed militias in protest against the election results, which threatens to plunge the country into a major crisis that increases its pain and threatens armed conflicts and an imminent civil war.

The results of the Iraqi parliamentary elections lifted the popular cover for the militias and revealed the tendencies of the Iraqi people to reject the presence of formations outside the framework of the state, which may push some forces to resistance.

The Shiite factions and forces loyal to Iran began inciting their supporters to take to the streets in protest under the pretext of rejecting the results of the elections, hours after the coordination framework announced its rejection of the figures revealed by the High Elections Commission, despite the calls of the majority of Iraqi political forces for the necessity of restraint. However, leaders in the Popular Mobilization Forces (PMF) do not hide the possibility of resorting to weapons, which increased the fears of turning the protest into an armed conflict.

The Iraqi Kata’ib Hezbollah militia also vowed to escalate matters in rejection of the official preliminary results of the parliamentary elections, calling for the trial of Prime Minister Mustafa al-Kadhimi, who stressed the integrity of the voting process and his rejection of extortion. The military spokesman for Kata’ib Hezbollah, Abu Ali al-Askari, said on his Twitter account, “What happened in the parliamentary elections a few days ago is the biggest fraud and deception on the Iraqi people, so Kadhimi must be prosecuted for his actions, the latest of which is the major treason he committed in collusion with enemies to rig the elections,” calling for action as soon as possible to restore the rights of voters and their candidates, otherwise there would be bad consequences.

The results of the parliamentary elections revealed the decline of Iran’s allies because of the Iraqi popular anger at Tehran, evidenced by the decline in the results of these parties compared to the previous elections. The Sadrist movement was also able to achieve an advanced position in the elections, which is mainly related to the role it played in defending the demonstrators who came out to express their rejection of Iranian influence and government corruption. It also showed the defeat of the parties allied with Turkey, as the United List, led by former Parliament Speaker Osama al-Nujaifi, who is close to Turkey, did not obtain any seats in these elections.

Likewise, the Iraqi Islamic Party, the political arm of the terrorist Brotherhood, which was gaining a percentage of seats in most of Iraq’s Sunni governorates, relapsed. As for the Sunni Azm Alliance, led by businessman Khamis Khanjar, which included armed factions loyal to Iran, it did not achieve an advanced position in the elections, as it received only 15 seats.

Therefore, it was not surprising that Iran’s militias brandished weapons, as they are the biggest losers in the current elections, and this is confirmed by the visit made by Quds Force commander Esmail Ghaani to Baghdad on the morning of the election results, which represented an attempt by Tehran to reduce its losses in Iraq by coordinating with Shiite forces affiliated with them in an attempt to return to the political scene again, challenge the election results, or employ militia weapons.

The forces affiliated with Iran have begun to follow one of two options, namely questioning the integrity of the elections or brandishing weapons, which is an additional indication of the decline in the chances of Tehran’s allies forming the next government, and the possibility of them resorting to a clash with other forces. The “coordinating framework” of Shiite forces, including the Fatah Alliance and the Victory Coalition, announced in a statement their rejection of the election results, in addition to announcing that they had taken all available measures to prevent voter manipulation, without clarifying whether this was intended to appeal to the commission or resort to the option of employing militia weapons, which threatens to enter Iraq into a dark tunnel and sink it into a civil war that will not end, especially since Iraq has been suffering from chaos and destruction since the US invasion of the country in 2003.

At the same time, observers expected a breakthrough in the political scene and that a consensus would occur between the political forces, especially since Iran would not allow Shiite-Shiite fighting to occur, because this would lead to the erosion and end of its role forever in Iraq, just as the United States would not allow that to happen, as the stability of Iraq is part of American interests in the region.