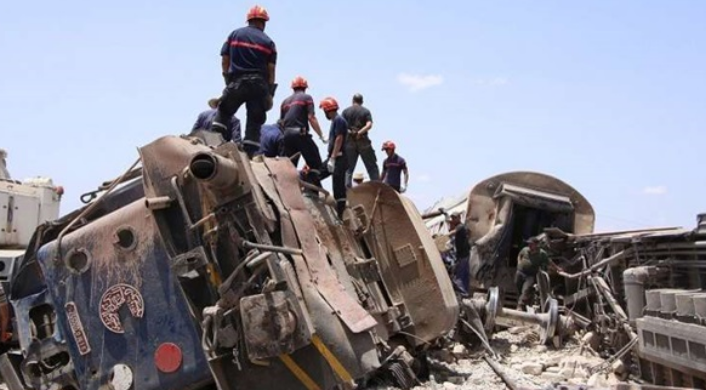 The Tunisian state has recently witnessed two separate incidents that the Tunisian observer dealt with in isolation.

The first incident reports a two-train collision that occurred Thursday, October 7, which injured 33 passengers, according to the Tunisian National Railways Company. In his first reaction, Tunisian President Kais Saied dismissed the head of the state-owned company from his duties during a visit to check on the injured.

A statement issued by the presidency on Friday, October 8, said that the appointment of a new head of the Tunisian National Railways Company will be announced following the formation of the government.

The second incident included news that the Tunisian security services had arrested a Tunisian couple who had just returned from Syria. According to information published by Tunisian media, the couple came from hotbeds of tension in Syria and were there for the purpose of fighting.

The arrest, which took place on Thursday, was carried out by a specialized team of the Tunisian national security service in Sidi Bouzid after careful investigations.

At first glance, the two incidents seem separate, but given the political reality that the country has been going through since July 25, which has so far resulted in the marginalization of the Brotherhood-affiliated Ennahda movement and the threat to its presence in the parliament against the background of the file of foreign funds in the 2019 legislative elections, a connection is expected between the two incidents, which is the attempt to threaten Tunisian security.

This is consistent with the existing fears that Ennahda, which is the most affected by the current political reality, will resort to violence. In the Egyptian experience following the Brotherhood’s overthrow, the terrorist organization adopted methods that threaten the security of the Egyptian state and people, such as creating crises in vital sectors, especially the railways, and even recruiting terrorists from Syria to Sinai to take revenge on the current regime.

This is exactly what the two Tunisian incidents make clear. In one day, two trains collided and two terrorists were arrested who had decided, at this particular time of transformation in the country, to return with all their experiences and ideas.

Violence is the Brotherhood’s approach

Despite the calm that Ennahda strives to maintain in order to appear before public opinion as wise, analysts stressed that its resort to violence during this period is inevitable in light of the existence of what is known as the “special apparatus.”

Evidence from the political ground indicates that Ennahda will not give in to Saied’s successive decisions that further marginalize it, considering that the movement will try to defend itself. The Brotherhood’s defense mechanisms range from harming public interests to carrying out bombings, as confirmed by the Egyptian experience.

Sarah Brahmi, the daughter of Tunisian politician Mohamed Brahmi, whom Ennahda is accused of killing, confirmed to the Reference that the movement resorted to violence and that information points to Ennahda having a secret apparatus.

She stressed that Ennahda will not give up its dream of ruling easily, considering that the movement will carry out any action in order to preserve its influence, even if it is outside the law.