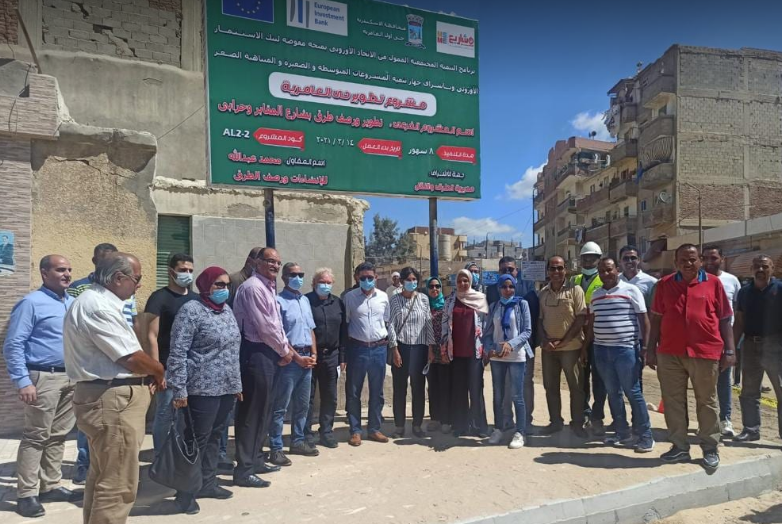 Monday, the 27th of September 2021, Cairo, to monitor the activities of the agreement financed by the European Union through a grant delegated to European Investment Bank (EIB) and implemented by Micro, Small and Medium Enterprise Development Agency (MSMEDA), an European Union Delegation headed by International Cooperation Officer, Vera  Morandini,  and Head of Technical Support Team Dr. Hartwig Behnfeld visited a number of labor-intensive infrastructure projects carried out by MSMEDA in Alexandria. The delegation was received by Deputy-governor Dr. Jackleen Azer and a group of MSMEDA officials presided by Head of Human and Community Development Central Sector Engineer Medhat Massoud and Manager of MSMEDA Alexandria Branch Mr. Mohamed Salah.

“According to the agreement signed by MSMEDA and EIB, 54 million Egyptian Pounds have been allocated to casual workers to implement a number of projects in El Amerya district namely substituting/renovating potable water networks, extending sewage lines and establishing a market for peddlers. More than 64 thousand daily jobs will be created,” Engineer Massoud said.

“MSMEDA has selected these projects in coordination with Alexandria governorate to meet the requirements of inhabitants and develop these areas through using casual workers to upgrade their skills to be better enabled to find suitable employment opportunities. Projects of the agreement are currently implemented in 6 governorates: Alexandria, Assiut, Giza, Menufia, Port Said and Sharqia. The agreement is expected to generate around 321 thousand daily jobs for casual workers,” Engineer Massoud added.

The agreement financed at EUR 15 million by the EU through a grant delegated to EIB, aims at improving the quality of life within the targeted governorates through upgrading infrastructure, generating daily jobs and creating the climate appropriate for the growth of small and micro enterprises.