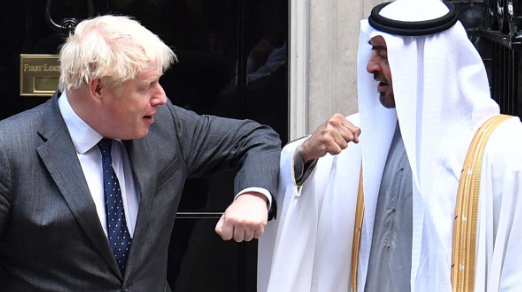 Ministers aim to secure a multibillion-pound investment from Saudi Arabia to fund renewable energy and infrastructure projects in the UK after yesterday’s announcement of a £10 billion deal with the United Arab Emirates.

Kwasi Kwarteng, the business secretary, visited Saudi Arabia in June for talks with its foreign minister, and negotiations are understood to be under way with Boris Johnson’s investment envoy Lord Grimstone of Boscobel.

Ministers are attempting to persuade Gulf sovereign wealth funds to expand beyond investments in property and blue chip firms in the UK.

At the top of the list is Saudi Arabia’s Public Investment Fund (PIF), which has assets of more than $500 billion including in UK-based firms. Ministers want the Saudis to invest in green projects such as hydrogen and carbon capture and storage.

“There is a lot of Saudi interest and there has been a lot of discussion behind the scenes,” a government source said. Another added: “The Saudi PIF is the obvious next step and Gerry [Grimstone] has very good relationships in the region. He is really driving this.”

Grimstone spoke earlier this year to a forum of the Saudi British Joint Business Council. He said Saudi Arabia’s Vision 2030 strategy had made sustainability a top priority for the kingdom in line with Johnson’s net zero plans.

In March, Mubadala pledged to invest £800 million in life sciences with Britain’s Office for Investment, which said it was contributing £200 million.

Since then, more than £1.1 billion has been deployed, including about £500 million in UK-based CityFibre to provide high-speed broadband.

Khaldoon Al Mubarak, group chief executive of Mubadala, said: “We are already developing ambitious energy transition, technology and infrastructure investment programmes that create new jobs and strengthen commercial ties between our nations.” Grimstone said: “Attracting investment has become globally competitive, and there’s never been a better time to be investing in the UK.

“This partnership has gone from strength to strength and its expansion is evidence of its effectiveness and what we can achieve with important partners like the UAE. The partnership will expand the exchange of knowledge, skills and ideas that will drive prosperity in both nations.”

Sources said that the government would identify investment opportunities in key areas such as “green” growth. The UK Office for Investment will help to identify sectors for Mubadala to invest in.

Mubadala traces its roots back to 1984, when the International Petroleum Investment Company was formed to channel the United Arab Emirates’ (UAE) newfound oil resources into investments to support healthcare, manufacturing and education in the region.

Its investments have included stakes in Ferrari, the sports car company, and Virgin Galactic, the space exploration company. It is also a significant investor in warehouses across Europe and owns the Viceroy hotels chain.

Mubadala has $243 billion of assets under management with investments across more than 50 countries. It is the second biggest sovereign wealth fund in Abu Dhabi and the third in the UAE.

Chris Brett, head of Emea capital markets at CBRE, a property consultancy, who has worked with Mubadala, said: “They are a long-term investor looking for smart, sustainable investments to get a steady return on capital to protect the future of Abu Dhabi.”