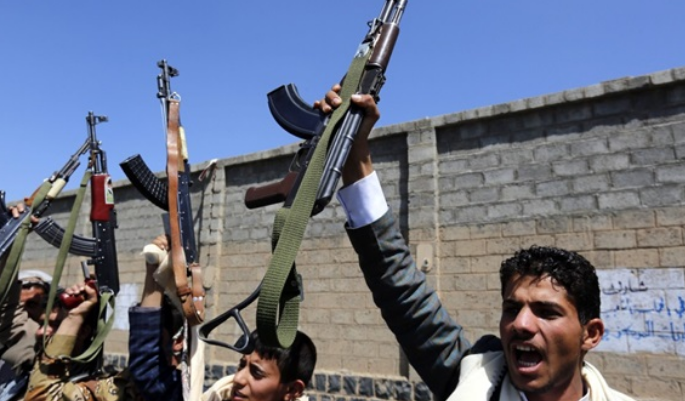 The Iranian-backed Houthi terrorist militia continues its violations in Yemen, encroaching on the citizens and reaching the point of affecting stranded immigrants who migrated in search of a better future.

Despite international warnings, the forced recruitment of African refugees by the Houthis continues, as the militia is pushing them to the battlefronts, where the refugees are forcibly recruited after being threatened with death or imprisonment, according to local media reports.

Yemeni Minister of Information Moammar al-Eryani referred to the Iranian-backed militia’s continued recruitment of African migrants and refugees and “throwing them into open crematoriums of death” on various battlefronts, describing this as a “war crime against humanity and a flagrant violation of international laws and covenants.”

Eryani cited in tweets the scene of the funeral of an Ethiopian immigrant that was broadcast by the Houthi channel Almasirah, pointing out that the terrorist militia deliberately lured African refugees and migrants into the ranks of fighters to compensate for its mounting losses as a result of its military campaign, especially in Marib governorate, following the failure of the mobilization campaigns it organizes as a result of the reluctance of the tribesmen to join its ranks.

Eryani called on the United Nations, the international community, human rights organizations and the International Organization for Migration (IOM) to condemn the militia’s recruitment of African migrants and refugees and using them in hostilities, demanding the prosecution of Houthi leaders and submitting them to the International Criminal Court as war criminals.

The Houthis recently buried the body of an Ethiopian refugee, Ahmed bin Shafi Sheikh Bashir Lazma, nicknamed Abu Hussein, who was killed while participating in the fighting on the Marib front in eastern Yemen.

Two years ago, the Houthis launched recruitment campaigns among the refugees and appointed supervisors who have experience in this matter, and their task was to mobilize the refugees, sort them and classify them according to their experience in carrying arms.

Those campaigns included Africans of different ages who were present as refugees in a number of Sanaa neighborhoods and other areas under the control of the terrorist militia.

It is noteworthy that on March 7, a detention center housing hundreds of migrants was exposed to a fire in Sanaa, which is under the control of the Houthis, leaving dozens of victims among the migrants, amid information that the militia was pushing them to the battle fronts.