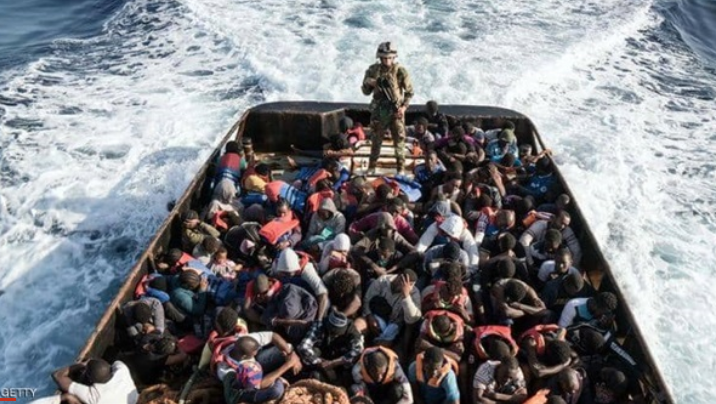 Terrorist crossings: Libya and Italy a headache for Europe

Illegal immigration poses a chronic headache for the countries of Europe, especially in light of the turmoil in the Middle East and specifically Libya, which is a dangerous place with terrorist organizations and mercenaries. The United Nations estimated on May 5 that there are 20,000 mercenaries and foreign militants in Libya, of whom dozens were able to escape from Libya to Europe from one of the Sabratha camps in western Libya through illegal immigration boats, which poses a threat to Europe, especially after the growing resentment of the mercenaries in Libya because of their house arrest and their failure to return to their countries.

Libya’s Department of Combating Illegal Migration (DCIM) confirmed that the instability of security has caused the majority of the cities of the western coast to turn into escape points for hundreds of migrants to Europe, especially Zuwara, which has become a transit center across the Mediterranean on boats provided by gangs specialized in transporting migrants to Europe, including members of some militias, in exchange for significant sums of money, taking advantage of their proximity to the Italian coasts. These groups prefer to venture across the sea to reach Italy by sea, and then Europe, and this is what the European bloc countries fear.

To this end, the European Union has made great efforts in combating illegal immigration through its cooperation with the coast guard forces of North African countries, training, and other forms of support to intercept thousands of people. EU governments have also agreed to avoid the Operation Irini patrol boats and monitor areas at sea in the Mediterranean, where they may have to deal with distressed migrant boats, as well as support for the Libyan authorities to stop the departures and ensure the return of those intercepted at sea. EU countries have also resorted to tempting African countries with incentives and aid to reduce illegal immigration operations since 2015.

Italy’s proximity to the Libyan coast has made EU countries look at it as a time bomb that threatens their security and stability. The biggest proof of this is that the Tunisian Ibrahim Issaoui, the perpetrator of the ISIS attack in the French city of Nice on October 29, 2020, arrived in French territory via Italy on a boat to the island of Lampedusa in in Sicily on September 20 of the same year. The same thing was repeated with the terrorist Anis Amri, the perpetrator of the Berlin attack in 2016, as he infiltrated Germany through Italian territory.

Therefore, French President Emmanuel Macron refused the invitation of Italian Prime Minister Giuseppe Conté to attend the counter terrorism summit, commenting that the invitation was limited to European countries that were subjected to terrorist attacks, although the unspoken reason is perhaps to punish Italy politically or to send an insulting message to the Italian government that Italy has become a security threat to the rest of the European Union member states.

Matteo Salvini, leader of Italy’s opposition Lega Nord party, described his country’s government as helpless in the face of the invasion of immigrants to his country, adding that European leaders consider Italy the source of terrorism that strikes the rest of the EU member states.

The Europol agency, which is concerned with maintaining security in the member states of the European Union, confirmed in a report that terrorists, especially those affiliated with al-Qaeda, flocked to the Italian coasts through the so-called safe routes, namely Libya-Sicily and Tunisia-Sicily, and then fled from inspection points in Italy to gain access to member states with the aim of carrying out their terrorist operations.

The report pointed to the increase in recruitment and ideological extremism indoctrinated inside Italian prisons, which led to an increase in ISIS supporters inside prisons. The biggest evidence of this is that the terrorist Anis Amri arrived in Italy via Sicily in 2011 and was living in a reception center for young people. He was not a terrorist at the time, but became radicalized later when he entered the prison of the city of Agrigento. Also, a terrorist jihadist of Gambian nationality, Alagie Touray, arrived on a boat docked on the shore of the city of Messina in Sicily in 2017, and he published a video on Telegram a year later in which he swore allegiance to ISIS from inside the reception center in the Licola district of Naples.