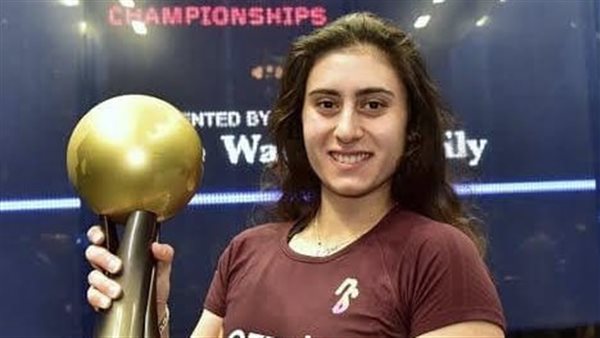 Nour El-Sherbiny is an Egyptian squash player who is ranked number one in the world. She was born on November 1, 1995.

She is considered the first Egyptian player to win the English Open Championship for squash under the age of 13 in 2009, after defeated Nouran Gohar in the final match.

She is also the first Egyptian squash player and the youngest in the world to qualify for the British Open final in 2012, but the dream of winning was postponed for four years.

El-Sherbiny won the World Squash Championship after winning the tournament, which was held in Malaysia, after defeating the English world number one Laura Marceau in the final, after returning from a two-game delay to none.

The Egyptian champion, Nour El-Sherbiny, ranked first in the world, recently won the World Squash Championship title, hosted by the American city of Chicago, after defeating her Egyptian competitor, Nouran Gohar, 3/1 in the final match that brought them together, becoming the third woman to win five titles in World Championship,

Nour El-Sherbiny’s journey with squash began since her childhood, when she was a 5-year-old girl, and her brother was the reason for her professionalism in this game, as he was a squash player, but he did not get his share of fame and tournaments like Nour.

The Republic Championship in the Junior Championships under 11 years old, when she is 8 years old, a precedent that did not happen, as indicated by her coach, Captain Rushdi Mabrouk.

El-Sherbiny shocked the squash world when she reached the final of the British Open at the age of 16 before losing to Nicole David, who is the ideal of Nour, as she said in an earlier interview.

El-Sherbiny insisted on doing something new in squash, and was able to rewrite the history of the game in Egypt and the world. The little girl has outdone her idol, who she once dreamed of being like, and won a landslide victory over Malaysian Nicole David at her home, and won the world championship at her expense.

It can be said that 2016 was the year of El Sherbini’s major achievement, as her first world title came in the Champions League in January, becoming the first Egyptian woman to lift the British Open title just two months later.

The crowned queen has played on the throne of squash in more than 96 tournaments, played about 346 matches, won 271 matches, lost in 75 others, and played about 42 finals.

Sherbiny continued, “Now I am in a difficult feeling and I do not know what to say. If someone tells me that I will win the world title five times, it is unbelievable.”

The first seed indicated that Egypt is very distinguished in the world in this game, and therefore no one is superior to it, and she continued: “The World Cup final in Chicago was purely Egyptian at the level of girls and young people.

The warrior inside the glass court is a title that Nour El-Sherbiny, the world squash champion, deservedly deserved, after she wrote down her own history in letters of gold in the world of sports, and inscribed with her endless effort and ambition, her name among the greats in the squash game, to be an example and role model despite her young age, for all champions, whether in Glass playground or other games.