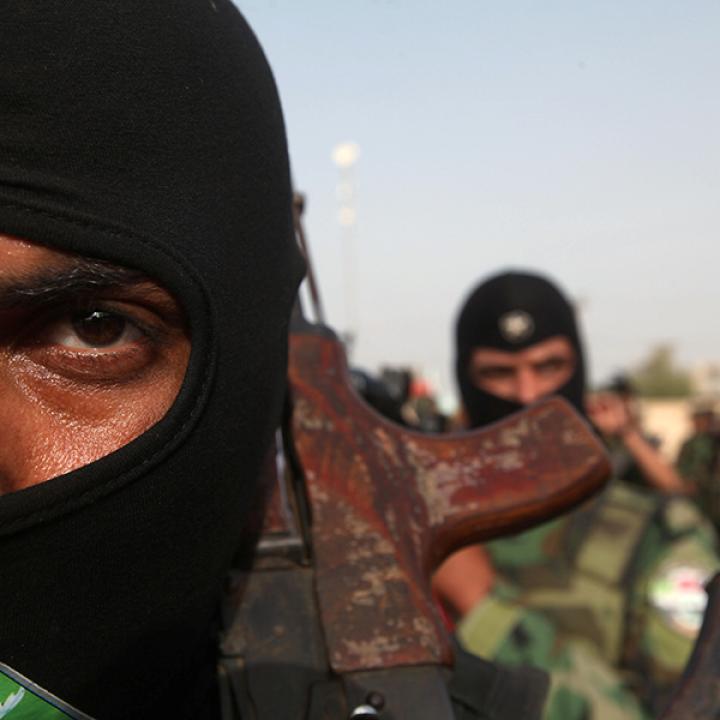 PMF flexes its muscles in Iraq

The military parade held by Iran’s Popular Mobilization Forces (PMF) in Iraq came as a flexing of muscles in front of the government in Baghdad and a reminder of the militias’ capabilities and that they have become a major force in the Iraqi political scene.

The parade was organized inside Camp Ashraf, which had been affiliated with the Iranian opposition People’s Mujahideen organization in Diyala province in eastern Iraq, and members of the PMF displayed new military vehicles. The parade was attended by Iraqi Prime Minister Mustafa al-Kadhimi in his capacity as Commander-in-Chief of the Armed Forces, in addition to some security and military leaders.

The PMF organized its largest parade since its establishment, which included drones and modern military vehicles, and displayed a large picture of Abu Mahdi al-Muhandis, who was killed in an American strike early last year alongside late Quds Force commander Qassem Soleimani.

In recent days, the PMF was about to enter into an armed clash with the government headed by Kazemi against the background of the arrest of a PMF leader accused of committing murders against young people demonstrating against corruption, as disputes erupted due to the arrest of Qasim Muslih, commander of PMF operations in western Anbar province since 2017, which leads the 13th Brigade, known as the Al-Tawaf Brigade.

Iraqi Defense Minister Juma Inad had downplayed the PMF’s military influence and stressed that its weapons do not pose any threat to the armed forces, noting that “the army is capable of fighting a country that attacks Iraq, not forces that possess simple weapons.”

The PMF was formed in June 2014 to fight against ISIS’s control over the city of Mosul in northern Iraq, and it contributed to the operations to defeat the terrorist organization and liberate Iraqi cities from it, but it committed violent sectarian massacres that provoked widespread international condemnation and claimed the lives of thousands of Sunni civilians in central and western Iraq.

The PMF turned into an official body under a law that was voted on in Iraq’s House of Representatives, but accusations continued to pursue its members of committing human rights violations with weak government oversight over it.

Recently, reports revealed that the Iranian Revolutionary Guards formed new factions in Iraq, consisting of hundreds of fighters who work within the PMF factions, and the members of the new factions received training by Iranian advisors and the Hezbollah militia in Lebanon. These groups are accused of being behind the recent attacks on US military bases in Iraq.

From time to time, confrontations are renewed between Iraqi Prime Minister Mustafa al-Kadhimi and the PMF militias, the latest of which reached the point of a PMF official threatening to “cut off the ears” of the prime minister last December.

Security forces have deployed heavily in Baghdad’s neighborhoods in the face of the PMF’s threats to take to the street if the government did not respond to its demands to release detained PMF members. Although PMF members officially fall under the Baghdad’s command, they owe full loyalty to Tehran.