Latest Posts
18:10
Home Reports One dead and four missing after explosion at chemicals plant in Leverkusen 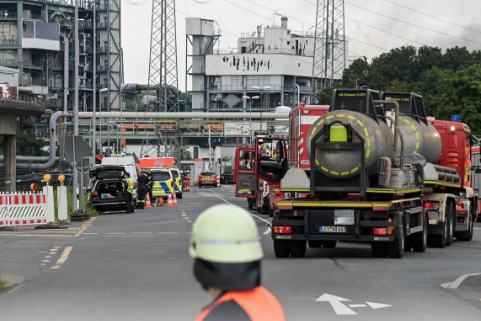 At least one worker was killed and four were missing after an explosion and blaze at a German chemicals plant sent a plume of thick black smoke into the air of Leverkusen. The blast occurred near a hazardous-waste incinerator in Leverkusen’s Chempark site, its operator Currenta said. Sixteen people were injured, with one suffering life-threatening injuries. The explosion could be heard in Cologne, six miles away, and caused tremors that were measured by seismic equipment about 25 miles away. Sirens and emergency alerts on the German civil protection agency’s mobile phone app warned the public of “extreme danger” in the second major public alert this month following the Rhineland floods less than 30 miles away that killed at least 180. The blaze destroyed three tanks containing organic solvents and the smoke drifted across the city. People were told to stay indoors to avoid possible toxic fumes. Currenta said that locals should also turn off air conditioning systems while it measured the air around the site. Police closed several motorways in the area. “This is a tragic moment for the city of Leverkusen,” said Uwe Richrath, mayor of the city, which lies north of Cologne. “I hope with all my heart that the missing workers got out of there, that we will find them alive.” Lars Friedrich, the Chempark manager, said it was not clear what had caused the explosion. “A precise analysis is not yet available so we have not withdrawn the warning,” he said. He said some that between 50 and 60 people worked in the complex hit by the blast. Playgrounds in parts of Leverkusen were closed as a precaution and people were told to thoroughly wash any fruit and vegetables they eat from their gardens. The explosion happened at 9.40am and it took until noon for firefighters to put out the blaze. Their work was delayed because a power line first had to be disconnected from the grid. Windows were rattled by the force of the explosion in the Buerrig district of the city. Leverkusen is home to Bayer, one of Germany’s biggest chemical companies. It has about 163,000 residents and borders Cologne, which is Germany’s fourth biggest city and has about one million inhabitants. More than 30 companies operate at the Chempark site in Leverkusen, including Bayer, Covestro, Lanxess and Arlanxeo, according to its website. Environmental campaigners said that Bayer and Currenta were “playing with fire” by operating so close to the city. Simon Ernst, a member of the Co-ordination against Bayer Dangers (CBG) said: “Gigantic distance rules apply to wind turbines, but Bayer and co are apparently allowed to do whatever they want in the immediate vicinity of large cities. This is one of the largest transshipment sites for chemical toxins in the region. Bayer and Currenta must inform the public about what exploded and burned there in the first place and how they intend to prevent it in the future.”