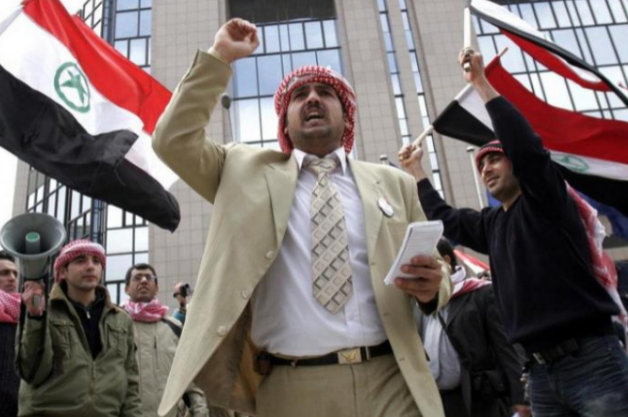 The issue of minorities continues to represent a headache for the Iranian regime, which, over the past decades, has deliberately assimilated and subjugated these ethnic groups, disrespected their cultural specificities, and attempted to seize their identity by preventing them from speaking their indigenous languages and weakening their cohesion. In this regard, crowds of Azeri Turks came out in the city of Tabriz, the center of East Azerbaijan province, northwest Iran, in support of the protests of the Arab minority in the province of Ahvaz, surrounded the Iranian security forces and police.

Video clips circulating on social media showed Azeri demonstrators chanting slogans such as “Azerbaijan supports Ahvaz” and “Azerbaijan, Ahvaz…union, union.” Some video clips showed the deployment of special forces and security forces in civilian clothes who attacked the demonstrators and tried to break up the protests. Protests also took place in the city of Bojnourd, in the northeastern province of Khorasan, in solidarity with the protests.

Amnesty International issued a statement calling on the Iranian authorities to stop using violence against protesters over water scarcity in Ahvaz, noting that eight people were killed in these angry protests.

In a statement, Amnesty called for the immediate release of detainees and the protection of prisoners from torture and ill-treatment, while Human Rights Watch confirmed that the authorities in Iran used excessive force to suppress demonstrations.

In turn, the US State Department called on Iranian security forces to stop violence and arbitrary arrests of protesters, and announced in a statement its support for the rights of the Iranian people to peaceful assembly and free expression, as well as freedom of access to information on the Internet without fear.

The Azeri Turkish minority in northern Iran suffers from racial discrimination and marginalization in favor of the Persians, and a number of them are calling for secession from Tehran and joining Azerbaijan. Representatives in the parliament had previously threatened to change the name of the province to North Azerbaijan to draw attention to the need to liberate South Azerbaijan, which is located in northwestern Iran.

Recently, feelings of anger flared up among members of the Turkish Azeri minority in Iran because of Tehran’s support for Armenia in its conflict with Azerbaijan, to which they feel a belonging and nostalgic for the people of their nationalism, which was torn apart by the Treaty of Turkmenchay in 1928 that divided their country into two halves, north and south of the Aras River.

Turkey supports the Azeri minority, and this support was a point of contention between Tehran and Istanbul after Turkish President Recep Tayyip Erdogan recited verses in the Turkish language calling for the reunification of the Azerbaijani people.

Usually, protests erupt in the Azerbaijani regions every so often because of a television program that mocks them, measures taken by the Iranian authorities against them, or in support of the uprising of any other people demanding independence from Tehran.