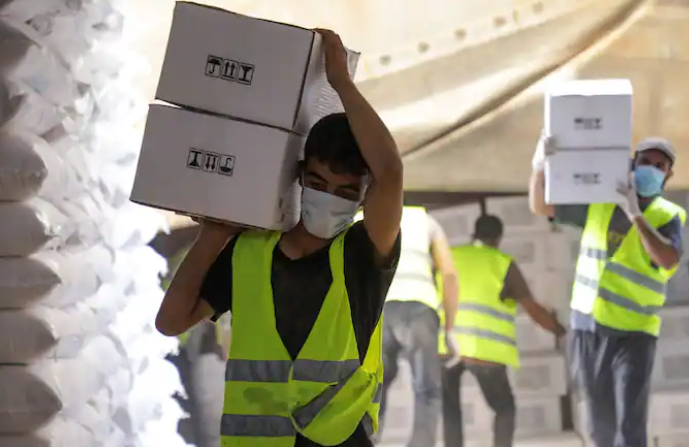 Parts of northern Syria will quickly face a massive and deadly humanitarian crisis if the U.N. Security Council fails this week to extend a resolution allowing the United Nations to deliver aid across the Turkish-Syrian border, according to relief workers, Syrian civilians and the Biden administration.

The resolution, which allows the United Nations to coordinate aid shipments to Syria through only one border crossing, is set to expire Saturday. Millions of Syrians dependent on the U.N.-led relief effort would immediately be put at risk if it lapses, aid workers say.

Russia has promised for nearly a year to veto any resolution allowing cross-border aid to continue, viewing its distribution to areas held by opponents of President Bashar al-Assad, an ally of Moscow, as a violation of Syria’s sovereignty. The Biden administration favors expanding cross-border aid to Syria, and the debate over the resolution has emerged as a high-profile test of whether the United States and Russia, at a moment of escalating tensions, can identify issues on which to forge common ground.

Administration officials from President Biden on down have described the aid issue as an example of the kind of cooperation they want from Russia as they seek a path toward longer-term strategic accords on cyber and nonproliferation issues.

Biden raised the border crossings at his summit last month with Russian President Vladimir Putin, citing the “urgent need to preserve and reopen the humanitarian corridors in Syria so that we can get food — just simple food and basic necessities — to people who are starving to death.”

While Putin made no commitment, White House national security adviser Jake Sullivan said later: “We believe that there is scope for the U.S. and Russia to work together on a positive outcome so that resolution gets passed, that crossing gets sustained, and that other measures to alleviate the suffering of the people of Syria are also adopted with the U.S. and Russia working together.”

At the Bab al-Hawa crossing Tuesday, Syrians preparing to return home from Turkey described the overwhelming reliance of relatives on humanitarian aid. “There is no work” in Syria’s northern Idlib province, said a 31-year-old man, sheltering from the sun under a tree along a road divider as a convoy of U.N. vehicles sped by.

His relatives in Idlib, displaced by a large-scale Syrian government offensive, received “everything” from aid agencies, he said, including cash, food, detergent and clothes. “The aid from the U.N., from Turkey, is the reason people there are alive,” said the man, who spoke on the condition of anonymity to avoid attracting attention from authorities on either side of the border.

“I am one person providing assistance to 26 people,” said the man, who worked construction jobs in Turkey. “I cannot provide for this number of people. I am not a working machine.”

The U.N.-coordinated aid operation began in 2014 after the Security Council authorized the provision of supplies through four border crossings into Syria from Turkey, Iraq and Jordan. Last year, the council removed three of the authorized crossing points after Russian and Chinese vetoes.

The United Nations’ shrinking access coincided with a surge in demand for humanitarian aid over the past year in Idlib and nearby areas, said Mark Cutts, the U.N. deputy regional humanitarian coordinator for the Syria crisis. “There’s been a serious economic crisis in all of Syria on both sides of the front lines. We’ve had covid, and we’ve had flooding in the northwest, as well as continued airstrikes and shelling and further displacement.”

The loss of border crossings meant that aid provision is “logistically a lot more complicated,” he said. “Journeys that used to take one or two hours sometimes take five times as long.”

With about 1,000 trucks carrying aid a month, the U.N. operation through Bab al-Hawa “is one of the biggest aid operations anywhere in the world,” Cutts said. If the resolution expires Saturday, “a lot of people are going to suffer. Lives will be lost,” he said.

The health-care system in northwest Syria relied on the United Nations for about 40 percent of its services, according to Mahmoud Daher, the World Health Organization’s emergency team lead based in Gaziantep, Turkey. The WHO, like other U.N. agencies, is pre-positioning supplies in northwest Syria, including emergency kits for surgical interventions and supplies for coronavirus outbreaks — stocks that could last four to six months.

But they would not be sufficient if medical needs in the province surge, he said.

The debate over the resolution has also been a test of the Biden administration’s ability to muster a broad coalition on an issue that it knew would be contentious. The thrust of its argument has been that human suffering in Syria has increased exponentially since Russia insisted that the 12-month extension expiring Saturday would be the last.

While the months-long U.S. diplomatic effort to marshal most, if not all, of the Security Council to object to the Russian position has been largely successful, there has been no public or private sign that Moscow has changed its mind.

The draft resolution, sponsored by Norway and Ireland, calls for two border crossings — Bab al-Hawa, as well as Yaroubia from Iraq into northeast Syria — to remain open for 12 months. Linda Thomas-Greenfield, the U.S. ambassador to the United Nations, visited the Bab al-Hawa crossing last month and has said that three are needed to keep more Syrians from dying.

After a closed-door council meeting on the subject Tuesday, at which diplomats said the Russians stuck to their negative line, they did not show up for a working group session for further discussions.

As it did twice last year, when its veto brought the number of crossings down to two, then one, Russia has argued that insisting that aid come across the border from Turkey is a violation of Syrian sovereignty and little more than assistance to terrorists interspersed among the millions of displaced Syrians in Idlib. Instead, it wants all international aid to travel through the Assad government.

The Biden administration and the United Nations have said that “cross-line” aid, distributed through and by Damascus into areas not under Assad’s control, should also be increased, a concession the Russians have largely ignored.

With the vote scheduled for Thursday, there is a strong likelihood that the draft will be rewritten or that others will introduce a pared-down version to include Bab al-Hawa alone. Russia may then insist, as it did last year, on only a six-month extension. That could set up more tense negotiations, this time in the midst of Syria’s brutal winter.