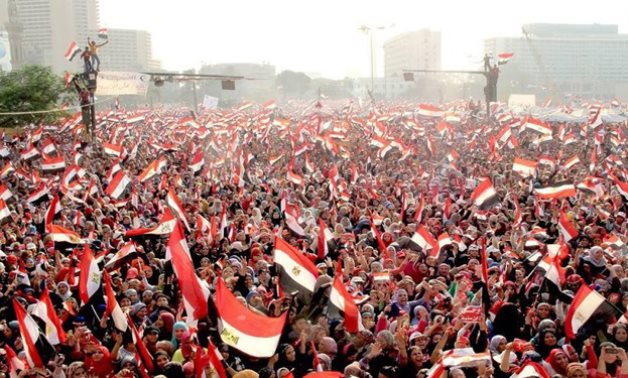 Egypt’s June 30 revolution shattered Turkish President Recep Tayyip Erdogan’s delusions of controlling the country through the terrorist Brotherhood, which later fled to Turkey seeking a safe haven following the sabotage and destruction the group caused. From here, Egypt became the number one enemy of Erdogan, the caliph of terrorism, who fell into a deep hatred against it.

In this regard, researcher Mahmoud Jaber said the June 30 revolution was a popular revolution that expressed the awareness of a people rejecting the Brotherhood’s control over their country and the entire region. Through Erdogan’s project, which was adopted with American funding, he dreamed of putting energy sources in his hands and under the command of the United States, seeking to implement the new Middle East plan based on creative chaos through which the region would be divided upon sectarian, religious and ethnic bases, ending the existence of the nation state.

The Egyptian people’s revolution brought about the revival and solidarity of the nation state, and the rebirth of Egypt’s national state will not stop there, as Jaber stressed that Egypt has the power to influence its surroundings. From here, Erdogan realized Inevitably that all his dreams will be shattered on the rock of Egypt, so he hastened to be hostile towards Egypt, which destroyed his hopes. He tried and is still trying with all his might to turn the clock back to try to realize and remedy his plan, knowing that Egypt’s army and people will not allow him to do so.

In his article in Al-Musawwar magazine, the great writer Abdul Latif Hamed explained Erdogan’s hatred of Egypt over the June 30 revolution, saying that the Turkish dictator’s wounds from the June 30 revolution will not heal no matter how many years pass, and he will not get rid of his psychological complex no matter how much drugs and antidepressants are used. Erdogan will not be able to control his sorrows no matter how many anniversaries pass, and his plots against Egypt’s gains will not stop no matter how badly the Egyptian people spoil them one after the other. He will not stop repeating accusations to reduce Egypt in all meetings and forums, and he will not spare any hidden or public measure to distort its symbols and leaders as long as he wreaks havoc on the earth, because his tyrannical hostility towards Egypt’s historical great popular revolution turned into a chronic and incurable disease and a disturbing nightmare that catches his breath every night, reminding him of his lost dream of a caliphate and his lost treasure that had been nearly within his reach with the arrival of his terrorist Brotherhood to power of the grand prize Egypt. But his delusionary fantasies were trampled by the Egyptians, who disregarded the rule of the traitors and aborted Turkey’s plans of controlling the region and harnessing its human and natural resources to serve Ankara.

Hamed added that the June 30 revolution was not just a local event, nor a revolution belonging to one people, but rather it was the final blow to the construction of a Turkish-Brotherhood strategy that was orchestrated over many years to tighten control over the entire Arab region, so that the capitals would fall into his grip one after the other, and what was left would fall apart.

Erdogan and his Brotherhood Justice and Development Party (AKP) prepared to drain the resources of countries and peoples, violate the sovereignty of states, and get rid of national institutions by making deals with terrorist organizations and mercenaries from all over the world, traitors of homelands, and unscrupulous people, taking advantage of the period of the Arab Spring revolutions in Tunisia, Egypt, Libya, Syria and Yemen, to create a favorable atmosphere to implement his pre-planned agendas and impose a fait accompli with the arrival of regimes allied with Ankara.