Latest Posts
21:38
Home News Yair Lapid Won’t Be Israel’s Next Leader. But He’s the Power Behind the Throne. 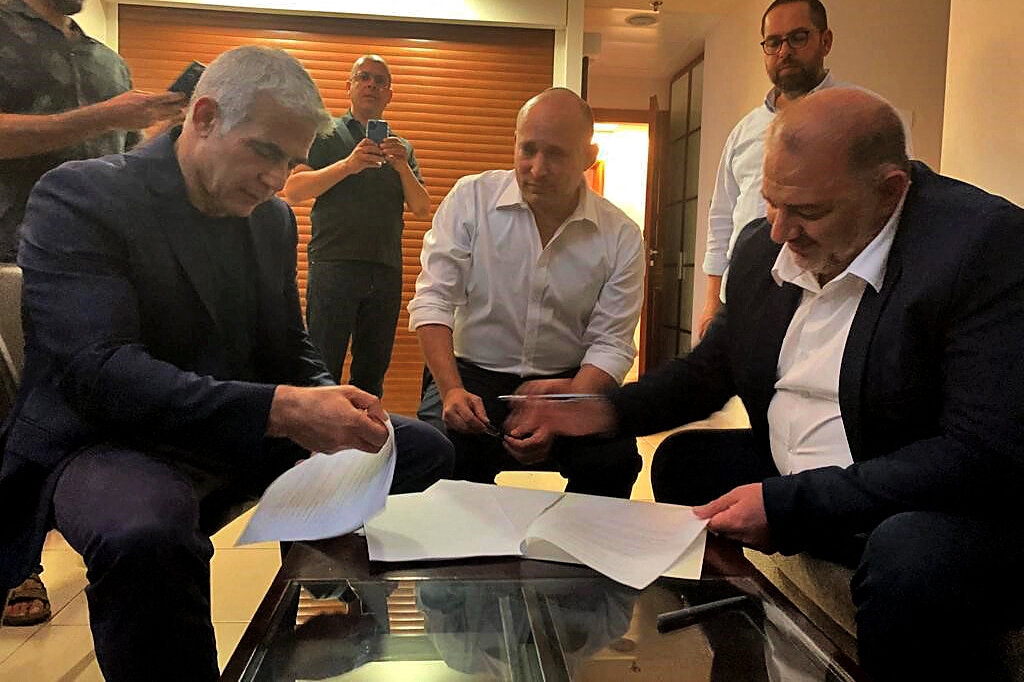 Yair Lapid Won’t Be Israel’s Next Leader. But He’s the Power Behind the Throne.

If a new coalition government wins a confidence vote in Parliament on Sunday, Naftali Bennett will be Israel’s next prime minister. He wouldn’t be there without Yair Lapid

When Yair Lapid was a rising newspaper columnist in the late 1990s, his editor, Ron Maiberg, found him a pleasant but self-centered and often intransigent man who regularly failed to cede ground in an argument.

“He would argue with you to death,” said Mr. Maiberg, then a senior editor at Maariv, a centrist newspaper. “Instead of admitting that Raymond Chandler wrote maybe seven novels and not nine or 10 — he would include the short stories to explain his counting.”

More than two decades later, Mr. Lapid, 57, is a man transformed, colleagues and analysts say. Now a leading centrist politician, he is considered gracious and conciliatory. And it is partly because of that transformation that Israel now stands on the cusp of one of the most significant moments in its recent political history.

On Sunday, Israeli lawmakers will hold a vote of confidence in a government to replace Prime Minister Benjamin Netanyahu, the country’s longest-serving leader. The new coalition is a fragile alliance formed from eight ideologically diffuse parties that are united only by their shared dislike of Mr. Netanyahu. If it holds, it will be largely because Mr. Lapid coaxed the unlikely alliance into existence over months of phone calls and meetings with faction leaders.

To cement the deal, Mr. Lapid has even allowed Naftali Bennett, a right-wing former settler leader who wavered over joining forces with centrists, leftists and Arabs, to go first as prime minister — even though Mr. Bennett’s party won 10 fewer seats than Mr. Lapid’s.

In a compromise, Mr. Lapid will take over as prime minister in 2023. But while Mr. Bennett takes the stage first, he does only because Mr. Lapid vacated the limelight for him.

“I’m not a great fan,” Mr. Maiberg said of Mr. Lapid. “But I will be the first to admit that he did grow up, he did mature, and he let go of the vanity part of his character.”

Mr. Lapid was born in 1963, and grew up in a secular and privileged bubble in Tel Aviv. His mother, Shulamit, 86, is a well-known novelist, and his father, Tommy, who died in 2008 at 78, was a journalist and later a centrist government minister.

Mr. Lapid completed his army service as a writer at a military magazine, later following in his father’s footsteps as a professional journalist. In the 1990s, he glided between several illustrious positions within the Israeli cultural establishment, balancing his column with a television talk show, while also acting in a handful of films, writing novels and even writing plays and television dramas.

By the 2000s, Mr. Lapid had become one of Israel’s best-known television hosts and commentators, noted for his noncombative style of questioning and middle-of-the-road columns.

He began planning for a political career toward the end of the decade, and in 2012 formed his own centrist, secular political party, Yesh Atid, or “There Is a Future.” It unexpectedly took second place behind Mr. Netanyahu’s Likud in a general election in 2013, entering a Netanyahu-led coalition government, and Mr. Lapid became finance minister.

Mr. Lapid was neither the first nor the last newcomer to attempt to break the mold of Israeli politics with a new centrist party. But to Mr. Lapid’s earliest political allies, there was a dynamism to his brand of centrism that they felt was original.

“I felt that I could come home,” said Yael German, once a mayor for a leftist party, Meretz, who later joined Yesh Atid and became one of its first lawmakers. “It was everything that I thought — putting limits on the religious parties, talking about civilian marriage, L.G.B.T. rights, giving up the occupied territories, two states for two peoples.”

Meretz “was always too left for me, too extreme,” Ms. German added. “But Yair wasn’t.”

To Mr. Lapid’s critics, however, there was a shallowness to his politics and an arrogance to his manner. What allies saw as an ability to bridge between left and right, others considered a lack of ideological clarity. Satirists set up a website, known as the “Lapidomator,” that allowed users to generate vacuous statements on any given topic — mocking the perceived emptiness of Mr. Lapid’s ideas.

Despite coming in second in the 2013 election, he was quickly criticized for subsequent derogatory comments about Arab lawmakers, and mocked for boasting of his ambitions to be prime minister.

People said, ‘How can he? He’s out of his mind,’” Ms. German remembered. “And he learned his lesson — not to say it, and not to brag.”

After he was fired by Mr. Netanyahu, and his party subsequently lost nearly half its seats at a snap election in 2015, Mr. Lapid found himself on the political outs. That prompted him to take a step back, reduce his media appearances, improve his knowledge base, and quietly foster a better political network, Ms. Frish said.

The first major sign that Mr. Lapid had matured came in 2019, when he began discussing with a rival centrist leader and former army general, Benny Gantz, about joining forces to try to topple Mr. Netanyahu. Though Mr. Lapid was the more experienced politician and had a better organized party, he agreed to serve under Mr. Gantz in a new alliance, Blue and White, having concluded Mr. Gantz had a better chance of defeating the prime minister.

Mr. Lapid’s new conciliatory approach gathered steam in January, as Israel prepared for a fourth snap election in two years. By that point, Mr. Lapid had broken with Mr. Gantz, after the latter abandoned their agreement last year when he joined a unity government led by Mr. Netanyahu.

Mr. Lapid knew that Mr. Netanyahu would only be defeated if he could unite a broad coalition of left-wing and right-wing opposition parties. And he recognized that some potential supporters of those right-wing parties would balk at supporting an alliance led by a centrist. So he refused to present himself as a prime minister in waiting to secure as many votes as possible for the anti-Netanyahu bloc.

Even as Yesh Atid rose in the polls before the March election, Mr. Lapid stuck to his message. He said he would be prepared to serve under a prime minister whose party had won fewer seats, if that was the price of replacing Mr. Netanyahu.

“Ending Netanyahu’s rule is the first goal in my eyes,” he wrote in a column in March. “For it, I am willing to give up a great many things, including my personal aspirations.”

As Election Day approached and his party polled higher still, he even encouraged leftist and centrist voters to vote for parties other than Yesh Atid to ensure that they received enough votes to pass the threshold necessary to enter Parliament.

“Whoever wants to vote for them should do so,” Mr. Lapid said a week before the vote.

Mr. Lapid’s party came in second in the election with 17 seats. But one of his first acts was to offer Mr. Bennett, whose party only won seven seats, the first shot at being prime minister. He then worked behind the scenes to coax six other parties into joining an alliance to topple Mr. Netanyahu.

Even after Mr. Bennett pulled out of negotiations during the recent Gaza war in May, leery of joining an alliance with an Arab party, Mr. Lapid kept negotiating with other opposition parties to sustain the momentum.

Mr. Lapid’s success is in part thanks to the toxicity of Mr. Netanyahu, who was ultimately deemed an untrustworthy partner even for his former allies like Mr. Bennett. But Mr. Bennett’s own party acknowledges that Mr. Bennett might never have broken with Mr. Netanyahu had Mr. Lapid not been so resolute in his efforts.

“Naftali had to be brave,” said an official from Mr. Bennett’s party, Yamina. “Lapid had to be consistent.”

Mr. Lapid’s move does not only stem from altruism or patriotism, some allies say. If the coalition collapses, Mr. Bennett may be punished at the next election by his right-wing base, whose members are angry that he has drifted away from a fellow right-winger in Mr. Netanyahu. But Mr. Lapid is likely to emerge with his reputation burnished and his electability enhanced — two factors that may have encouraged him to be so conciliatory.

“He’s a very ambitious chess player,” said Ms. German, the former Yesh Atid lawmaker. “He’s playing for the long run — so I do believe he has this ambition of being prime minister.”

But it is precisely Mr. Lapid’s desire to avoid confrontation that some observers feel could also become a vulnerability once he finally enters office.

“He wants to be loved by everybody,” said Mr. Maiberg, his former editor, adding that it could hinder him when faced with the biggest issues, like the Israeli-Palestinian conflict.

“Can he lead a negotiation about the future of the West Bank?” Mr. Maiberg asked. “I don’t know. Is he strong enough? I don’t know.”