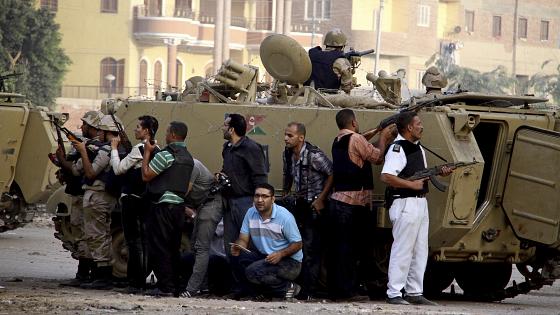 Kerdasa and Helwan: Most prominent terrorist strongholds in Cairo and Giza after June 30 Revolution

Following Egypt’s June 30 Revolution in 2013, the Brotherhood and its elements took several areas in Giza and Cairo, and they used those areas to launch their terrorist marches and carry out various acts of violence. In addition, they used some apartments to manufacture various types of explosives.

Among the most important areas of Cairo Governorate that they took as a stronghold are Al-Matariya, Ain Shams, El-Marg, Helwan, Alf Maskan, and Nasr City. In Giza, the strongholds included Talbeya, Faisal, Haram, Boulaq El-Dakrour, El-Saff, El-Ayyat, Kerdasa, El-Omraniya, and 6th of October.

In the following report, we monitor and talk in detail about the most prominent areas that the Brotherhood has taken as their stronghold, whether in Cairo or Giza governorates.

They established an organizational group that embraces extremist ideas based on the infidelity of state institutions and public authorities, and the legitimacy of revolting against them. That group planned to carry out hostile acts against public facilities, security personnel and Copts.

The group and its supporters continued to go out in daily marches in that area, and they deliberately attacked the residents of the area and broke streets and sidewalks as they walked, according to a statement by the Ministry of Interior.

Following the dispersal of the Rabaa and Al-Nahda sit-ins, the Brotherhood and its members called for a sit-in in Al-Matariya Square.

Helwan is among the most important areas that the terrorist group considered its stronghold, and it was one of the most famous areas that witnessed mass violence and rallies.

According to the Interior Ministry’s statement, a large number of Brotherhood leaders lived in Helwan, and the security services were able to defeat 85% of them in recent years.

There were about 15 marches every week in Helwan, and all of them originated from several major mosques.

The most prominent of these mosques are Al-Rahma in Arab Ghoneim, Ansar al-Sunna in Kafr El-Alou, Al-Huda in Helwan Gardens, Omar Ibn al-Khattab in Al-Masara, Al-Maraghi in Helwan, Al-Zahra at Tabbin, Khulafa al-Rasul in the American project, and Al-Nour in the 15th of May City.

As for Ain Shams, it was among the burning areas due to the Brotherhood’s demonstrations. They organized weekly marches and gathered at the Ain Shams crossing linking the Shubra Misr neighborhood, Al-Matariya and Ain Shams, and they used the crossing as a starting and gathering point.

This is in addition to the demonstrations that emerged from various mosques, the most prominent of which are Hamza, Fatima al-Zahraa, Noor al-Islam, Quba and Khaled bin al-Walid.

It is considered one of the popular areas known for its many and narrow side streets, and the streets there are very similar to each other, so the group’s supporters used to take it as an important place to start their marches, and then they would flee from the security forces in its various streets.

The most prominent mosques from which demonstrations took place include Sheikh Bassem, Al-Quds, Amer, and Sheikh Mansour, but the security services were able to firmly control those marches that roamed El-Marg and Ezbet al-Nakhl on a weekly basis.

Giza Governorate is considered the second terrorist stronghold of the Brotherhood and its supporters after the June 30 Revolution, as it has many popular and agricultural neighborhoods in which it is easy to escape and hide from the eyes of security.

The Kerdasa neighborhood is considered one of the areas that the terrorists used as a stronghold.

The most famous incident in Kerdasa was the storming of the police station with heavy weapons, when terrorists massacred 11 members of the police division, starting with the sheriff to the youngest recruit. This occurred after the dispersal of the sit-ins at Rabaa al-Adawiya and al-Nahda on August 14, 2013.

After this massacre, destructive demonstrations continued, until the security forces were able to control the neighborhood and cleanse it of all terrorist groups.

As for Haram, Al-Talbeya and Faisal, they were among the popular areas that witnessed many demonstrations almost daily, and terrorist engaged in clashes with the security forces.