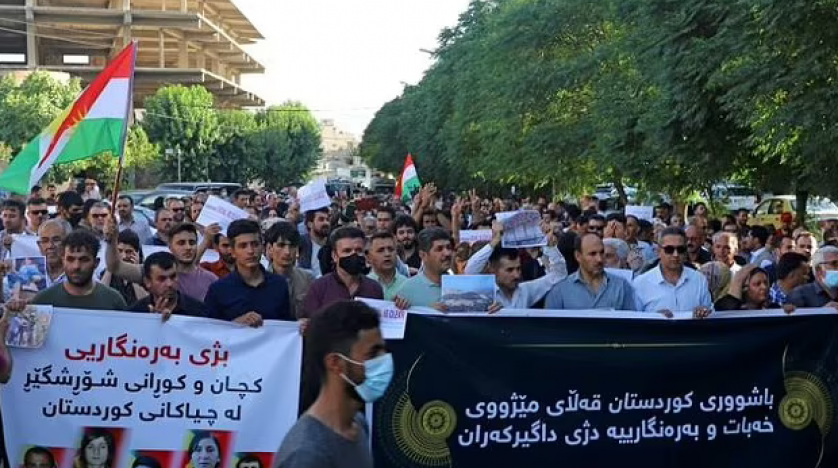 One fine day in May, Yohanna Khushfa gathered his 200 sheep and took off, along with 120 other villagers in Iraqi Kurdistan, fearful of the Turkish drones hunting Kurdish separatists.

“Shrapnel blew out our windows and furniture,” the mayor of Jelki, a village in the Al-Amadiya area, told AFP.

“We were afraid for our lives and we left,” said the 71-year-old, reached by telephone from a rugged strip near the Turkish border.

Since Turkey launched a new military campaign in northern Iraq on April 23, three civilians have been killed and four wounded.

Amongst those, according to Turkish President Recep Tayyip Erdogan was a senior official from Turkey’s outlawed Kurdistan Workers Party (PKK).

In the face of Turkey’s actions, some 1,500 people from 300 families have fled their villages, according to Iraq’s ministry for the displaced.

Others already left long ago, among them Berqi Islam, who fled in 2017 from Shiladzi, an area near the border where his brother was killed in Turkish bombing.

With his family’s farmland burnt down and no compensation paid by Iraqi Kurdish or federal authorities, he has yet to return.

Erdogan, who has threatened to “clean up” parts of northern Iraq, accuses the PKK of using the mountainous border area as a springboard for its insurgency.

The Turkish president is willing to move “Turkey’s ongoing military confrontation with the PKK from Turkey to territory the PKK controls or transits through in Iraq,” said Aykan Erdemir, senior director of the Turkey Program at the Foundation for Defense of Democracies.

He said Baghdad and Erbil, the capital of Iraqi Kurdistan and an ally of Ankara, appear to have accepted this.

In a sign of Turkey’s growing confidence, its defense minister visited troops on Iraqi soil in early May, even though the dozen bases and other military posts that the Turkish army has set up over the past quarter of a century are illegal in the eyes of Iraqi law.

Baghdad has summoned the Turkish ambassador several times in protest over Turkey’s military actions, but the bombs continue to fall — taking away 2.5 percent of Iraq’s forested areas, “an inhuman environmental crime” in the words of Iraqi President Barham Saleh.

And the Turkish incursions are getting deeper — up to 20 kilometres (12 miles) inside Iraqi Kurdistan, said Kurdish MP Rivink Muhammad, himself from Al-Amadiya.

“Until the latest campaign, Turkish forces were entering through the border posts, but now they are setting up their own routes to avoid the official crossings,” added colleague Ali Saleh.

Ankara, the PKK charges, wants a repeat of the situation in northern Syria, where Turkey has since 2016 conducted three military offensives that have left it in control of more than 2,000 square kilometres (770 square miles).

“All of our operations only target terrorists, respecting international law and respecting the territorial integrity of our neighbors, particularly Iraq,” he told reporters.

But he warned they would “continue until the last terrorist is neutralized… Our duty is to destroy all of the villains’ nests.”

Zagros Hiwa, a PKK spokesman, told AFP that Ankara was determined to block any dream of a Greater Kurdistan straddling Syria, Iraq, Iran and Turkey.

Turkey’s military forays are “strategic, they aim to occupy Kurdish areas to cut off contacts between the Kurds (of the four countries) and eventually create a security cordon”, he said.