Latest Posts
21:38
Home News Iran’s next president will ride a wave of voter apathy into power 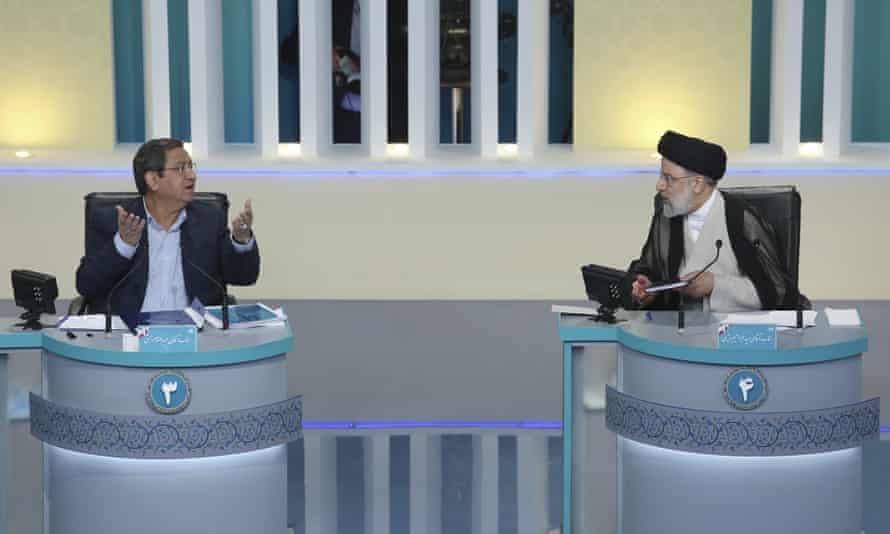 Rap and K-pop aren’t music genres you’d expect an Iranian presidential hopeful to be familiar with. And yet, during the second televised debate ahead of the countrywide poll on 18 June, one of the candidates displayed an impressive knowledge of the contemporary musical landscape.

“They play rap on their own programmes, but they have banned rap. Our teens have moved on to K-pop or Korean pop. Our own rap [music] is still underground,” said centrist Abdolnaser Hemmati, the former governor of the Central Bank of Iran.

Hemmati’s comment seemed to be directed at the hardline frontrunner, the chief of the judiciary Ebrahim Raisi, who lost the 2017 election to incumbent Hassan Rouhani. One of the running jokes at the time was that Raisi failed because of an awkward photo op with Amir Tataloo, a then-popular underground Iranian rapper with tattooed arms (who has since covered himself in tattoos from head to toe and lives abroad).

Talking about K-pop during a nationally televised presidential debate appears to be one of many gimmicks deployed in order to draw voters in. But it’s unlikely to be enough to rally Iranians – specifically Iranian youth – to an election that is expected to set new records for low turnout.

Even before the Guardian Council, a powerful vetting body, approved only seven out of 592 presidential candidates on 25 May to weed out any competition against Raisi – who is also assumed to be the top choice for the next supreme leader – voter apathy was a recognised problem. The February 2020 parliamentary elections – where reformist candidates were also disqualified en masse – had the lowest voter participation since 1979 with only 42.6% of eligible voters taking part.

Iranians, growing more frustrated and disillusioned by the day, have an increasing list of complaints. Perhaps ironically, this is something that has developed during the past four years of the moderate Rouhani administration.

At the top of the list is the dire state of the economy, caused by government corruption and mismanagement, and the punitive, broad-based economic sanctions that were reimposed by the Donald Trump administration after its withdrawal from the Iran nuclear deal in 2018. Additionally, the fact that the Rouhani administration has been in place since 2013, serving for two full terms, seems to confirm that moderate and reformist factions are incapable of delivering tangible change. This is partly due to the limited powers of the presidency compared to the supreme leader, the judiciary and other positions not chosen directly by the electorate.

Finally, there is the outright repression. Fresh in the minds of Iranians are the anti-establishment November 2019 protests prompted by a fuel rise in which security forces killed and arrested thousands. Then there was the wrongful execution of the wrestler, Navid Afkari, in September 2020. These two incidents deeply angered the populace. Added to this was the shooting down of a Ukraine International Airlines passenger plane by the Islamic Revolutionary Guard Corps, killing 176, including scores of Iranians, during high tensions with the US in January 2020 – after the American drone strike assassination of the Quds Force commander Qassem Suleimani.

With these grievances in mind, there have been mounting calls to boycott the election to signal discontent with the nezam, the system. This includes families of the victims of the Ukrainian passenger jet and of state repression, and more than 230 dissidents in Iran who have signed an open letter calling on the Iranian people to boycott the vote. There are even trending hashtags on Twitter that translate as “No way I’m voting” and “I won’t vote”.

The Green movement leader, Mir Hossein Mousavi, who has been under house arrest since 2011, wrote that he sided with the Iranian people who were taking a stand against “humiliating and engineered elections”. While prominent activists including Bahareh Hedayat and Faezeh Hashemi, the firebrand daughter of the late president Ali Akbar Hashemi Rafsanjani, have announced on the audio-only app Clubhouse that they intend to boycott the elections.

On Clubhouse, which has been making waves in Iran since March, there are nightly debates about the election. In recent weeks, there is a growing theme of Iranians expressing their dissatisfaction with what is essentially a one-horse race. “The president has already been selected, now we’re just waiting for the election,” said one Iranian. “They told me to vote for Rouhani so Raisi doesn’t become president [in 2017], but in the end, they made him judiciary chief,” said another, noting that regardless of who they vote for, the outcome will end up being what the establishment wants.

On 4 June, there was a subtle change in mood when the supreme leader, Ayatollah Ali Khamenei, called on the Guardian Council, a body consisting of six clerics chosen by the leader and six lawyers indirectly chosen by him, to reverse its decision and allow other candidates to run. The Guardian Council quickly shut down that notion, leading some analysts to believe this was merely Khamenei trying to absolve himself of responsibility for the state’s anti-democratic manoeuvring. The reality is that the supreme leader has wanted a “young and pious” government to take control for some time, and installing a conservative president would secure his vision of all three government branches being led by hardliners.

Some think that might hurt Raisi’s chances on 18 June – not to mention his weak performances during the three debates – but with an official poll suggesting a low turnout of about 37–43%, he is likely to be Iran’s next president.