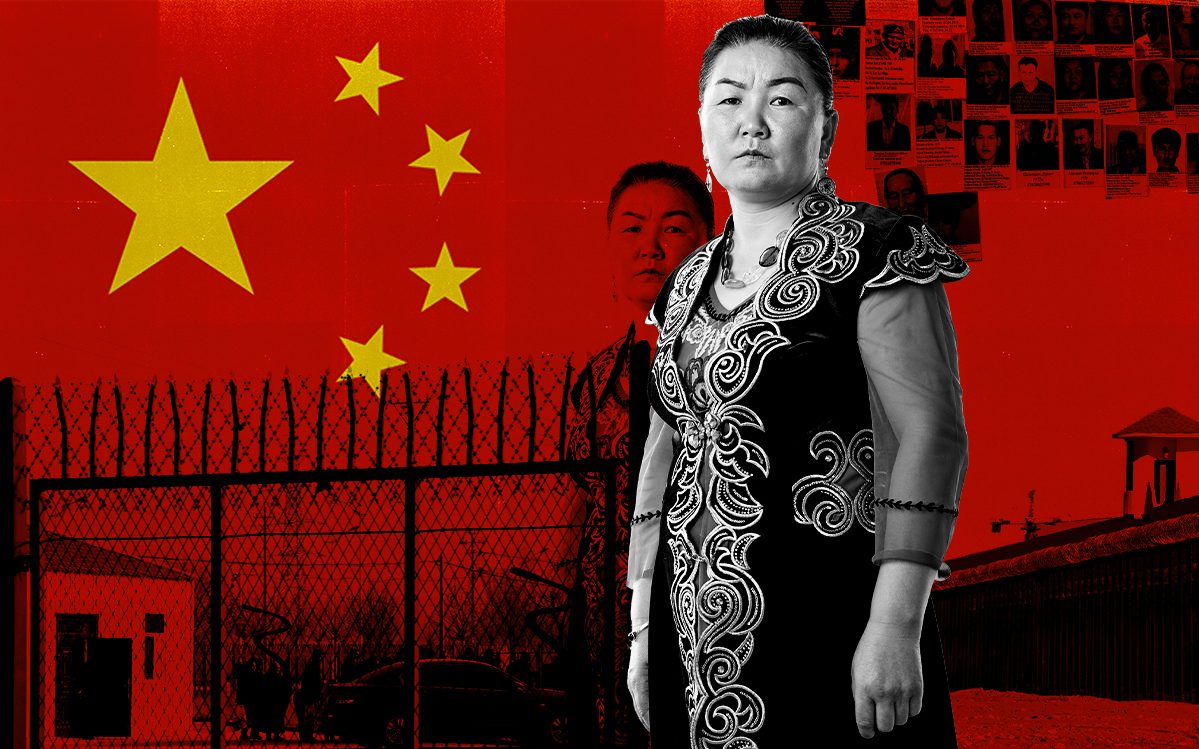 Yerzhan Kurman was relieved to be released after nine months in a ‘re-education camp’ in China’s Xinjiang region.

Mr Kurman, a Kazakh Muslim, remembers being electrocuted by cattle prods and forced to sing Communist party songs during his detention.

But within days of his release, the 42-year-old was sent to work 12-hour shifts in a garment factory, where managers demanded he produce 200 pairs of gloves a day – a high quota to meet.

“I could only make 30 to 50 a day, and they threatened not to pay or to make us work even longer if we couldn’t finish,” he told the Telegraph. “It was impossible.”

Gulaisha Oralbai, 46, holds a photograph of her four siblings, all of whom she believes to be detained in by Chinese authorities

No matter how quickly Mr Kurman and others worked, the factory continued to withhold wages.

Like him, many had been forced into the factory from China’s vast network of re-education camps where more than a million Uyghurs, Kazakhs and other ethnic Muslim minorities have disappeared since 2017.

Beijing policies in Xinjiang region have been described by the US government as well as British and Canadian lawmakers as a genocide.

Others were wives of men still in detention. “As the government described it, this was their way to support the family by giving work to the wives,” he said.

In the end, Mr Kurman was paid 300 yuan (£33) for 50 days of work, and only after he and other workers went on strike to demand wages.

“The factory said we were supposed to work for free for six months,” he said.

Mr Kurman and other workers stayed in dormitories a 15-minute drive from the factory, where they slept 12 to a room and were made to study Communist Party doctrine – a continuation of the “learning” that had begun in the camps.

Mr Kurman first recounted his harrowing experience to the Telegraph in February 2019, a month after being allowed to leave the factory in China and return to Kazakhstan, where he had immigrated shortly before being thrown into the camp while visiting his hometown in Xinjiang region.

He has now agreed to forego his anonymity, adding his voice to mounting evidence that Xinjiang detainees – after being subjected to physical torture and political indoctrination in re-education camps – are being forced to work in factories producing goods for export.

There are “several examples of people being ‘released’ from camps on the premise of signing a contract,” said Rune Steenberg, a Xinjiang specialist and postdoctoral researcher at Palacky University Olomouc in the Czech Republic.

“It’s like a ‘no choice’ choice… It’s not forced in the sense of putting a gun to your chest, but saying no has consequences.”

Such offers of work come “within an environment of unprecedented coercion, undergirded by the constant threat of re-education and internment,” according to a recent report by Laura Murphy and Nyrola Elima, published by Sheffield Hallam University (SHU).

“Many indigenous workers are unable to refuse or walk away from these jobs, and thus the programmes are tantamount to forcible transfer of populations and enslavement.”

The Chinese government itself has documented the “placement” of 2.6 million ethnic minority citizens in farm or factory jobs in Xinjiang and across the country, noted the SHU report.

Chinese authorities were clear with Gulzira Auelkhan, 41, that if she didn’t sign an agreement to work for a year, she would be sent back to a ‘re-education’ camp.

Gulzira Auelkhan, a former detainee of one of China’s vast network of ‘re-education’ camps

By then, she had already been detained for a year and a half – at times tortured and wrapped in heavy chains – and was desperate to reunite with her family.

“We were told that we were ‘underprivileged’ people, and that if we refused work, we would be considered as someone with the ‘wrong’ ideology,” she said.

Growing a beard, wearing a headscarf, visiting a mosque to pray or travelling abroad were other examples that would mark someone for internment.

Ms Auelkhan had no option but to agree to be transferred to a factory to make gloves for less than a penny per pair in landlocked Ili prefecture, located in western Xinjiang region, where a Chinese state security office looms on Stalin Street.

Khalida Akytkan, 64, holds photos of her son and his family, who were all detained by Chinese authorities in Xinjiang Province

The factories, authorities said, were built so that “detainees could be placed into a job,” she recalled. “We had to thank the government for eliminating poverty in the country by employing so many people.”

The factory where she and others interviewed by the Telegraph worked is located in a vast textile park, where a number of Chinese businesses produce goods for export, including for Western fashion brands.

The Telegraph called a number listed for the factory; a man who initially answered hung up abruptly; subsequent calls never connected through.

Using government procurement documents and satellite imagery, researchers from the Australian Strategic Policy Institute, a think tank, have identified at least eight detention facilities within a few kilometres of the factories.

Similar combinations of camps and industrial parks have sprung up across Xinjiang as part of a broader plan to transform the region “into a docile and lucrative economic hub to “increase both the economic productivity and the ‘stability’ of the region,” according to the SHU report.

Nearly 1,000 miles south of Yining in Karakax County stands a sprawling complex with police stations, detention facilities, factories and living quarters with every window covered with iron bars. Minders in plainclothes tailed Telegraph journalists and tried to bar them from filming.

Ethnic Kazakh man Azamat, an alias, who was kept without charge for around eight months in internment camps in Xinjiang Province

Ethnic Kazakh man Azamat, an alias, who was kept without charge for around eight months in internment camps in Xinjiang Province CREDIT: Sam Tarling

Azamat, 44, whose name has been changed to protect his identity, was shuttled through three different detention facilities before being sent to a massive factory with about 4,000 workers, where he estimated a few hundred people were camp detainees.

Here, he was stationed at a sewing machine and forced to make handbags, clothes and gloves, and was never paid for his work. Every day, he wondered if his family was surviving without him, the main breadwinner – especially his youngest child who has diabetes and needed daily insulin injections.

“We were deprived of freedom for two years; I lost those years and I can’t have them back,” said Azamat, a construction worker with ruddy cheeks and deep laugh lines.

“I’m so angry that I wasted those two years of my life, and couldn’t see my family.”

All three – Mr Kurman, Ms Auelkhan and Azamat – were eventually released, likely due to public campaigns waged by family members in Kazakhstan.

But Chinese authorities warned all of them to stay silent, or risk harm to relatives in China.

People who believe their families and relatives have been detained by Chinese authorities in internment camps Xinjiang Province gather at the headquarters of Kazakh Human Rights in Almaty, Kazakhstan

People who believe their families and relatives have been detained by Chinese authorities in internment camps Xinjiang Province gather at the headquarters of Kazakh Human Rights in Almaty, Kazakhstan CREDIT: Sam Tarling

“They threatened that if I ever talked about the camps, or what was happening in China that they would destroy my family there, find me wherever I was in the world and send me back in even worse conditions,” said Ms Auelkhan, who has since fled to the US where she is seeking asylum.

Authorities vowed to detain Azamat’s brothers in China if he ever spoke about his experience – a threat he worries about to this day.

He was surveilled so closely in detention that even now it feels like someone is watching his every move. “They could tell when you were blinking.”

More than two years after being released, both Mr Kurman and Azamat still suffer from aches and pains from being beaten, shackled and starved in the internment camps.

Poor health has made it hard for both to hold down jobs in their respective trades of farming and construction. And Mr Kurman still at times wakes up some nights in a cold sweat.

China has repeatedly rejected allegations of abuse and forced labour, claiming that the camps were for vocational training and necessary to combat extremism and that Xinjiang was a “happy” place.

A facility believed to be a re-education camp where mostly Muslim ethnic minorities are detained, in Artux, north of Kashgar

Beijing has continued to defend its actions even after the UK, US, Canada and EU in March announced a raft of sanctions against Chinese officials for human rights violations in Xinjiang.

China’s ministry of foreign affairs did not respond to a request for comment.

“I didn’t do anything wrong… but I couldn’t even urinate without permission. I was always under their control and monitored. Until I was released and crossed back to Kazakhstan, I never felt free,” said Mr Kurman, wringing his hands

“Nothing I did was of my own free will while I was in China.”