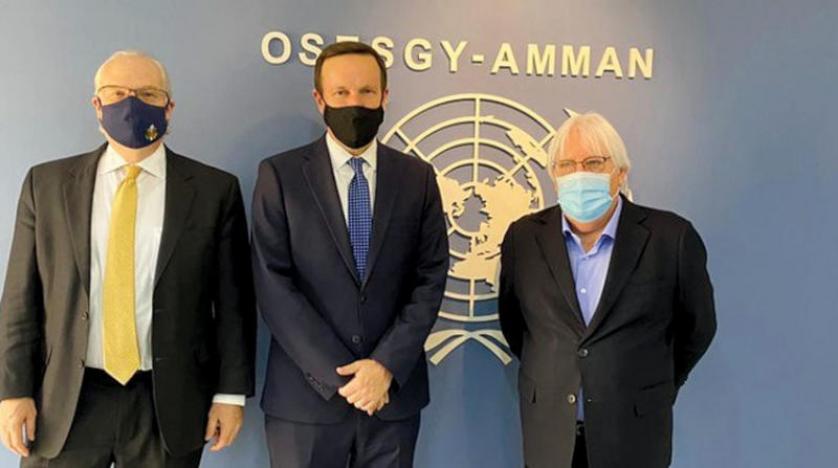 US Senator Chris Murphy, member of the Senate’s Foreign Relations Committee, said he visited Oman to push for a ceasefire in Yemen’s Marib.

In a series of tweets, Murphy called on Houthis to stop their assault on the city of Marib.

“If the Houthis enter Marib, a new humanitarian nightmare will ensue as legions of Yemenis will flee the violence,” he said, adding that he asked Omanis to convince the Houthis to stand down.

He discussed his recent visit to Qatar, which has not yet made a contribution this year to the United Nations aid program to Yemen, urging it to step up in this regard.

“The UN needs to be resourced to provide food, water, and health care to those in dire need. Right now, the 2021 UN appeal is only a third funded. I went to Qatar to ask the Qataris, who have not yet made a contribution this year, to step up.”

Murphy further stressed the importance of delivering food and fuel aid to the war-torn country.

“Without the ability to freely import food, fuel, and other goods, Yemen’s economy has come to a grinding halt, causing disease and starvation,” his tweet read, pointing to the need to end blockade of key ports and the Sanaa airport.

Once these factors are implemented, a ceasefire could be reached and would eventually lead to a peace process, he noted.

“But any prospect of a ceasefire/ peace process needs active US engagement,” the Senator said, hailing the presence of so many US officials in the region.

Murphy’s remarks were in reference to the US delegation, which kicked off a visit to the region, led by special envoy Tim Lenderking.

According to Murphy, Yemenis will ultimately dictate the future of their country.

“So the peace process shouldn’t include only the same power brokers who have caused decades of endless wars. New voices need to be at the table, to ensure that all Yemenis have a say on the country’s future.”

Meanwhile, a group of influential US legislators called on Joe Biden’s administration to help raise $2.5bn in aid for Yemenis suffering amid what they described as “the world’s worst humanitarian crisis.”

In an open letter on May 4, four US senators urged Secretary of State Antony Blinken to provide more aid for Yemen and rally other countries to contribute after a recent United Nations fundraising appeal for the war-torn country fell short.