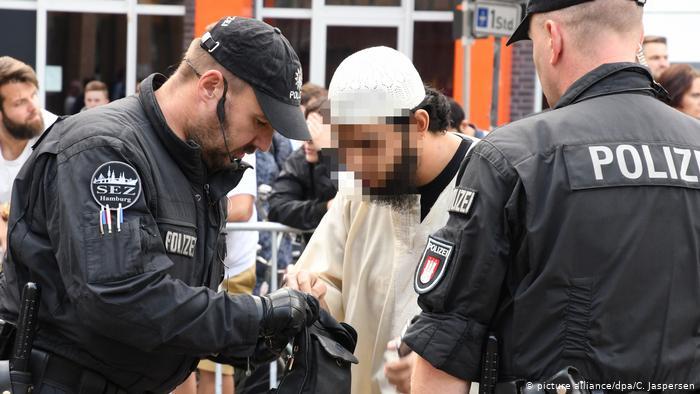 A recent study issued by the European Center for Counterterrorism and Intelligence Studies revealed that Abu Walaa al-Iraqi has a strong role in recruiting young people in Germany for the benefit of ISIS in Syria and Iraq.

The study noted that Abu Walaa’s real name is Ahmad Abdulaziz Abdullah, and he moved from Iraq in 2000 and settled with his family in the town of Tönisvorst, North Rhine-Westphalia, explaining that he had proven himself as the most influential hardline Salafist in Germany and was called Abu Walaa al-Iraqi, as well the Sheikh of Hildesheim and the Faceless Preacher.

Abu Walaa, 37, was a preacher in a mosque in the city of Hildesheim in northern Germany, where he attracted Islamists from all over Germany. The mosque was closed by a decision of the German authorities after it turned into a meeting point for extremist Salafists, not only from Lower Saxony, but also from outside the state, becoming a center of the Salafist scene.

The study pointed out that it is believed that about 20 men who left Germany to join ISIS in Iraq and Syria had turned to extremism through the mosque in which Abu Walaa was preaching.

The mosque was established in 2012, and the security authorities placed it under surveillance for three years. According to the Minister of the Interior of Lower Saxony, the mosque preaches “hatred against non-believers,” and at least 26 young men from Hildesheim and its surroundings traveled to war zones.

According to estimates by Germany’s domestic intelligence agency, the Federal Office for the Protection of the Constitution (BfV), in a May 2016 report, the state of Lower Saxony includes 550 Islamic extremists, and about 75 people have traveled from the state for jihad in Syria and Iraq.

Abu Walaa pledged allegiance to ISIS and established a network to recruit young German fighters, and he used to provide them with financial and logistical assistance to travel to ISIS’s areas of influence in Syria and Iraq.

He also set up accounts on social media networks and was broadcasting his thoughts and sermons on his official YouTube channel, most of which did not show his face.

There was even an application named Abu Walaa in the Apple Store, where smartphone users could track his activities, while the number of fans of his Facebook page reached about 25,000. Abu Walaa also entered into an argument with German Salafist preacher Pierre Vogel, who has publicly condemned terrorist attacks against the West.

At the end of a long trial that lasted three years, Abu Walaa was convicted of belonging to a foreign terrorist organization, financing terrorism and helping to prepare for violent acts, and he was accused especially of recruiting young men and sending them to fight in Syria and Iraq.

The judges concluded that the hate preacher and his network had radicalized young people, especially in the Ruhr region and Lower Saxony, and sent them to ISIS battlefields.

Three other accused were sentenced to prison terms of between four and eight years.

The public prosecutor had demanded imprisonment of the main accused for a period of 11 years and six months, and periods ranging between four years, six months and 10 years for the other three, while the defense demanded the acquittal of the defendants or lighter sentences.

At the end of April, the German authorities said that German prosecutors charged an Iraqi immigrant with belonging to a terrorist organization, against the background of allegations that he had collected thousands of dollars for ISIS.

The man, who was identified only as Ayman in keeping with German privacy laws, was arrested in early January at the German border with Switzerland. He claimed he was heading to join ISIS and intending to fight in Syria or anywhere else, federal prosecutors said.

The man went to Germany from Iraq in 2016 during a massive immigration wave from the Middle East.

“The accused began to take an interest in the ideology of ISIS at the end of 2018 and joined the extremist group before the beginning of 2020,” according to the prosecutors.

The German prosecution said, “Ayman originally wanted to travel to the Middle East to participate in armed jihad, but the group’s members asked him to postpone the plan and stay in Germany to collect funds.”

Between June and September 2020, the accused transferred no less than $12,000 in various transactions to ISIS in Syria and Lebanon.

Prosecutors said the money was used to support female sympathizers in Syrian refugee camps and to finance the smuggling of women to ISIS. They claimed that the money sent to Lebanon was intended to help get ISIS fighters out of prison and facilitate their return to the organization.

The security authorities estimate the number of hardline Salafists in Germany at about 6,500, but not all of them are prepared to use violence. But some mosques are used to attract young men and spread extremism among Muslims, such as the Al-Noor Mosque in Berlin, which the security authorities closed, as it was considered a stronghold of militant Salafists, according to the Federal Office for the Protection of the Constitution.