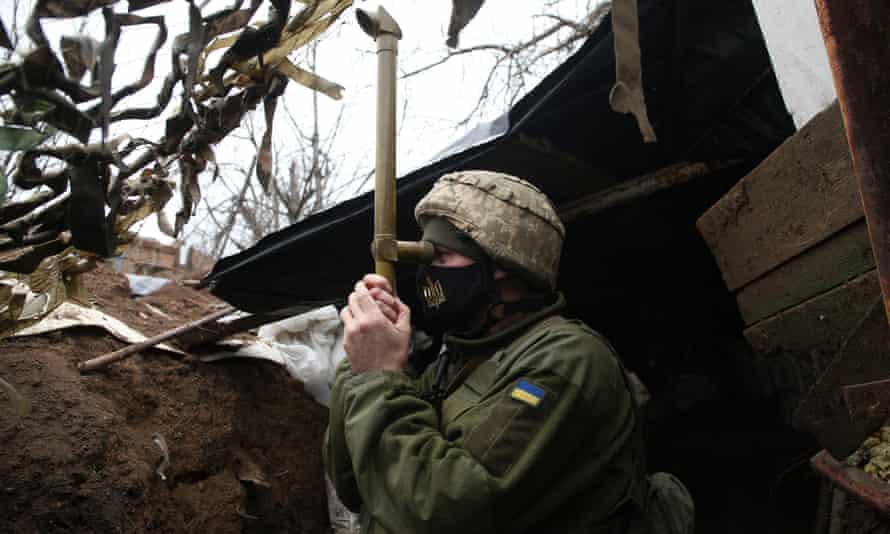 The pieces for a major surge of fighting in the Donbas continue to fall into place, highlighting an escalation of tensions between Russia and Ukraine that could potentially play out on the battlefield.

Analysts are loath to predict what will happen as Russia continues a massive military buildup near Ukraine’s borders and in Crimea, the Ukrainian peninsula seized by Russian forces in 2014.

But while the more optimistic view is that the show of force is a bluff intended to test the West’s resolve in supporting Kyiv in the face of Moscow’s support for separatists in eastern Ukraine, the moves heighten the risks that fighting that has been contained to the Donbas since 2014 could spill over into a broader conflict.

“If it’s just a ‘show of strength,’ Russia is doing an awful lot to make it wholly convincing,” Nigel Gould-Davies, a senior fellow for Russia and Eurasia at the International institute for Strategic Studies (IISS), wrote on Twitter on April 14.

In recent weeks, Russia has unexpectedly boosted its troop presence near the conflict zone in Ukraine. As questions about Moscow’s motives mounted, military officials eventually said the forces were moved for exercises intended to test combat readiness in response to long-planned NATO drills in Europe.

Thousands of Russian troops have been transferred to a staging area south of Voronezh, located about 250 kilometers from the Ukrainian border, adding to forces already stationed there.

Analysis of open-source material by the global intelligence company Janes has identified tanks, infantry fighting vehicles, long-range artillery, rocket launchers, and Iskander short-range ballistic missile systems among the materiel that has been moved to the area since mid-March. U.S. and NATO officials have called it the largest military buildup in the region since Russia’s surprise occupation of Crimea and the start of fighting in the Donbas, which has killed more than 13,000 combatants and civilians since April 2014.

At @JanesINTEL alongside a lot of other Russian units moving to the Ukrainian border we’ve identified the deployment of Iskander, likely from the Central Military District’s 119th Missile Brigade to Voronezh.

Janes, which specializes in military and defense analysis, has also identified army air-defense systems being transported to the region as well as a long-range telecommunications system and a field hospital.

Similar activity has been seen in the Rostov region, which borders parts of the Donbas held by Russia-backed separatists, and on the Tavrida highway to Crimea, with eyewitnesses telling RFE/RL that convoys includes combat vehicles and multiple-rocket launching systems.

Ukrainian Defense Minister Andriy Taran told the European Parliament this week that Russia would ultimately have 110,000 troops within 56 tactical battalions at its disposal in Crimea and near Ukraine’s borders, saying the built-up force could be used for “unpredictable, escalatory actions.”

The Russian Defense Ministry, meanwhile, announced it was sending additional naval vessels to reinforce the Crimea-based Black Sea Fleet. Without evidence, Moscow has accused Kyiv of planning an offensive against separatist forces in the Donbas and has warned that it would intervene if necessary to protect Russian citizens — an apparent reference to residents of the separatist-held areas who have been given Russian passports.

This all comes as a cease-fire brokered last summer has collapsed in the Donbas, with more than 25 Ukrainian soldiers killed in separatist-held areas of the Donetsk and Luhansk regions since the start of the year, compared to 50 in all of 2020, and separatist forces claiming that more than 20 of their fighters have been killed.

Heorhiy Tuka, a former Ukrainian deputy minister for what Kyiv calls the temporarily occupied territories, says that families in separatist-held areas of the Donetsk and Luhansk regions are leaving for Russia in anticipation of a big war.

While Tuka told Current Time on April 14 that it was too early to say what might happen, he boiled things down to three likely scenarios:

A show of force intended to force a new round of negotiations regarding the conflict in the Donbas;

An escalation of fighting involving pinpoint strikes that would not result in Russian forces crossing its border with Ukraine and would force negotiations;

Or a full-scale invasion of Ukraine that would attempt to establish a corridor between Russian-controlled Crimea and separatist-held territories in the Donbas.

Tuka said he considered the second scenario to be the most likely, with the ultimate goal being the mandatory resumption of fresh water supplies to Crimea and direct negotiations between Kyiv and the two Russia-backed, self-declared governments in separatist-held areas of eastern Ukraine, demands that Moscow has been making since the war began in 2014.

At the same time, journalist Denys Kazanskiy, a member of the Ukrainian delegation to the trilateral contact group on the Donbas — which comprises Ukraine, Russia, and the OSCE — said that Russian pro-government media were entering the conflict zone.

Kazanskiy described this as an “alarming” sign, saying that “when such people appear, their arrival is usually marked with some kind of aggravation” that is blamed on Ukraine.

Despite the Russian military buildup and being told that Ukraine is preparing to invade, Kazanskiy said, he said he does not believe the people in the separatist-held areas are panicking, because they have seen this before.

“It’s like The Boy Who Cried Wolf,” Kazanskiy said, noting that residents were told recently that the invasion would take place on March 15. “They shout all the time that Ukraine will attack, and advance, and that aggravates tensions.”

Should major hostilities break out again in the Donbas, the situation will have changed a lot since 2014, according to experts. Both the Ukrainian and Russian militaries are seen as better prepared.

Kyiv has significantly boosted defense spending since 2014, has U.S.-supplied Javelin anti-tank missiles in its arsenal, and boasts troop numbers of nearly 250,000 compared to 168,000 in 2013.

When fighting broke out in eastern Ukraine, the country estimated that it had only 5,000 combat-ready troops and had to call on volunteer militias to help in the war effort, and Russian forces no longer benefit from the element of surprise.

As for Russia, “the situation is fundamentally different,” according to military expert Yuriy Butusov, editor in chief of the Ukrainian website Censor.net.

“A military reform has been taking place in Russia since 2015,” Butusov told RFE/RL’s Russian Service. “It is aimed at strengthening the quality component of the armed forces, specifically for the conditions of a local war, military operations against Ukraine.”

Rather than maintaining understaffed units, he said, “the Russian Army has moved on to maintaining a large number of full-fledged, ready-for-immediate-action units that are in a higher degree of combat readiness.”

Ultimately, however, Butusov said that the lack of structural reforms in the Ukrainian military would make it difficult for it in a mobile war with Russia.

“We are inferior to the Russian Army in weapons and military equipment,” he said. “On the other han , the Ukrainian Army surpasses the enemy in motivation.”

Former Ukrainian deputy minister Tuka gave a similarly dour assessment of Ukraine’s chances in a war with Russia, saying, among other things, that Ukraine’s air-defense system is in “a deplorable state.”

“You have to speak objectively and honestly,” he told Current Time, the Russian-language network led by RFE/RL in cooperation with VOA. “The fact is that if assets of the Russian armed forces are used — such as aviation, missile forces, or long-range artillery — then I have grave doubts .”

Another factor in the tension over the Russian military buildup is Moscow’s severely strained relations with the West.

The announcement of new U.S. sanctions on Russia on April 15 may make the Kremlin more cautious about actions that would further aggravate those ties, Aleksandr Baunov, an analyst at the Carnegie Moscow Center, wrote on Twitter.