Latest Posts
15:40
Home News Ethiopia: The Tale of Eritrean Withdrawal From Tigray – but Where Is the Border? 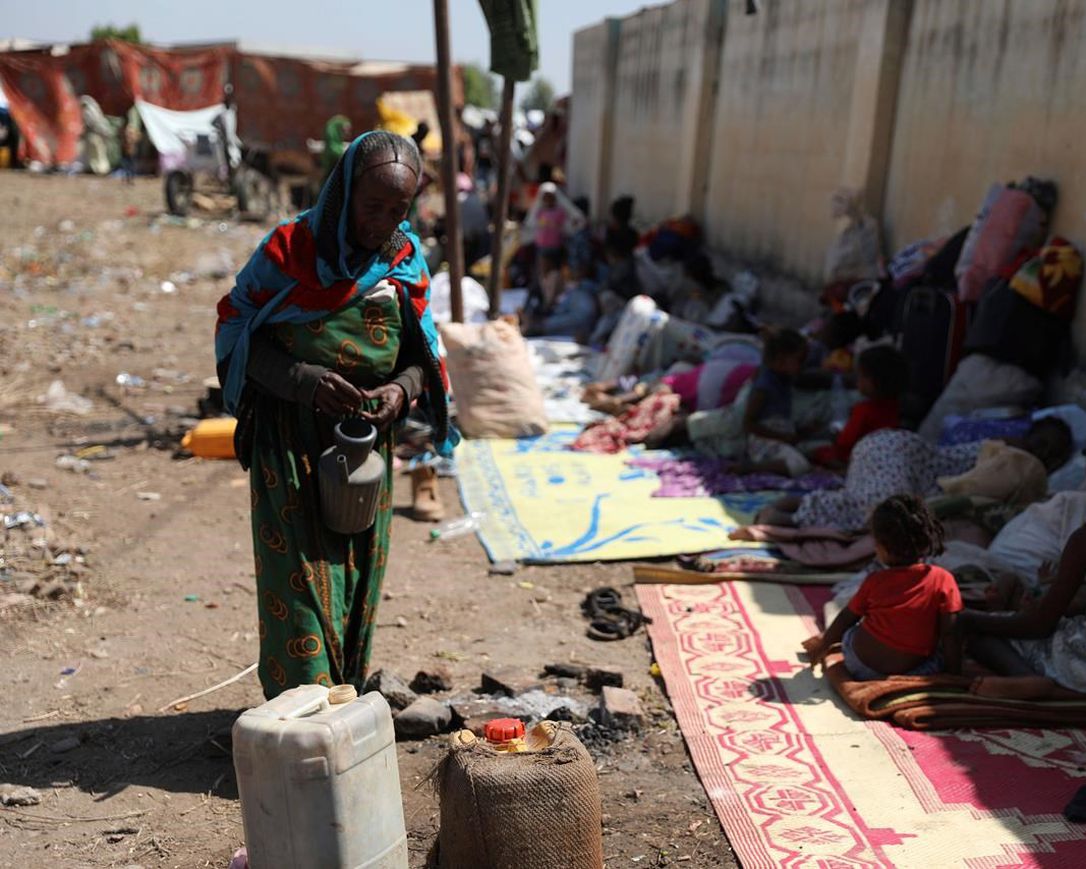 Ethiopia: The Tale of Eritrean Withdrawal From Tigray – but Where Is the Border?

During a session in parliament on March 23, 2021 Prime Minister Abiy Ahmed of Ethiopia publicly acknowledged Eritrean involvement in his country’s ongoing civil war in Tigray but indicated that it would take some time for Eritrea’s forces to withdraw. Three days later, the Prime Minister issued a statement announcing that the government of Eritrea had “agreed to withdraw its forces out of the Ethiopian border” and that the Ethiopian army “will take over guarding the border area effective immediately”. This begrudging admission – after four months of unconvincing denial – that Eritrea was in fact waging war inside Ethiopia was, in large measure, a result of sustained pressure from the European Union and the Biden Administration in the United States. However, the announcement raises several important questions, one of which has been at the heart of the Ethiopia-Eritrea conflict all along and could determine its conclusion or continuation.

In responding to questions from members of the Ethiopian House of Representatives, Abiy Ahmed explained away Eritrea’s crossing of the border into Ethiopia as a response to TPLF provocations and because the suddenly weakened Ethiopian military could not give security guarantees to Eritrea. He assured the parliamentarians that once Ethiopia rebuilds its pre-war military capacity to guard its own borders, the issue of Eritrean troop presence in Tigray would cease to exist. One is then compelled to ask how it is that in three days Ethiopia regained its pre-war military strength to guard its borders, give Eritrea the needed security guarantees, and execute Eritrean military withdrawal. Ethiopia is in no position to demand withdrawal of Eritrean military; without whose support it could not contain – much less defeat – the TPLF. Nor would President Isaias give in to such demands as he seeks total demise of the TPLF.

The Prime Minister’s announcement of Eritrean withdrawal from Tigray is nothing more than public relations theatrics. Troop movements on the ground show that Isaias’ regime, with the connivance of the Ethiopian government, is merely reorganizing and reinforcing its units and repositioning them for plausible deniability while it continues with its scorched earth campaign against the TPLF/TDF, and indeed the people of Tigray. Before the Prime Minister’s announcement, six brigades had returned from Tigray to Eritrea. These brigades belonged to three infantry divisions that carried out the bulk of fighting and bore the brunt of casualties. Their return to Eritrea had more to do with their need to recuperate and replenish their personnel than an intent to withdraw from Ethiopia.

Since Prime Minister Abiy’s announcement, confidential sources on and near the ground report that there has indeed been large-scale movement of Eritrean troops within Tigray and between Eritrea and Tigray. Accordingly, as of late March 2021, an entire division composed of popular militia has returned to central Eritrea. A unit of the 23rd Division has also reported back and has been sighted in western Eritrea. The fast-changing developments make it hard to conclusively establish final position or deployment destination. But while a few units have returned to Eritrea and a few others have been rotated to the border area, credible reports from the ground indicate that the Eritrean government has in fact reinforced its forces in Tigray rather than drawn them down. On balance, confidential sources from the area are reporting that Isaias Afwerki has as of late March/early April committed some 40 percent of Eritrean military personnel in a last-ditch effort to finish off what remains of the TPLF.

Partially because of that troop build-up, fighting has intensified across many parts of Tigray. The other reason for the intensification of fighting is because Tigrayan forces are ambushing Eritrean government forces on the move and attacking their rear as they are rotated to new positions. Two such rotated brigades of the 16th Division, for example, travelled in a large convoy from areas of active fighting in Tigray’s lowlands and arrived in Biyara and Badme at the end of March 2021. These two villages were once contested between the two countries and Ethiopia held them until the outbreak of the current war because the TPLF refused to relinquish them to Eritrea. Even if one were to assume the remaining Eritrean troops were to be similarly rotated to the border between the two countries, the exact location and legality of that border remains unresolved.

The unresolved border dispute between Eritrea and Ethiopia

Following the 1998-2000 border war between Eritrea and Ethiopia, an international arbitral court ruled on the delineation of the border between the two countries. The TPLF-led government in Ethiopia first rejected the ruling and later demanded to negotiate its implementation, i.e. physical demarcation of the border. President Isaias Afwerki rejected all attempts at negotiations and insisted, instead, that the border ruling is first upheld to the letter and the border demarcated. Eritrea bore hefty consequences of the ensuing sixteen years of no-war no-peace.

The rise of Abiy Ahmed to power in 2018, and his offer of peace with Eritrea that included full acceptance of the International Court of Arbitration’s ruling on the border, presented an opportunity to settle the issue for good. Instead of demanding the demarcation of the border as he had done during the TPLF era, President Isaias dropped his steadfastly held position and altogether bypassed the neighboring Tigray region to make common cause with the young, inexperienced but hugely ambitious new Prime Minister in Addis Ababa. The two leaders travelled regularly to each other’s capitals, scheming the eradication of their common enemy, the TPLF, which took precedence over the permanent settlement of the border issue. The Eritrean leader especially betrayed his country’s best interests in pursuit of vengeance against his enemies now confined in the Tigray region of Ethiopia.

One wonders about the usefulness of the conflict even if it is aimed at the existential necessity of eliminating the TPLF. Are we better off today, even if we assume for a moment that the TPLF is gone, which has not yet happened? How much more useful would it have been to find some form of a compromise, some give-and-take, an accommodation with a little loss of face and pride in the interest of avoiding war, than the disaster and generational calamity we find ourselves in today? The tenor of these questions also applies to the TPLF, which is an equal party to the ongoing war.

The border issue between the two countries remains unresolved, and an interstate or irredentist confrontation could keep flaring up unless the boundary is demarcated on the ground and the issue is settled once and for all. It would, therefore, be critically important for the United States, the European Union, the African Union and the United Nations to bring the border issue back to the table and help resolve it permanently. Resolving the contention between the current or future governments and other actors in the two countries is paramount as such a resolution would deny President Isaias (or future leaders in either country) any pretext to cross a mutually accepted and clearly defined international border. In the context of the current conflict, without a mutually agreed upon clear delineation and demarcation of the border, the Ethiopian Prime Minister’s declaration rings hollow. So do the grand ideas about cooperation between the two countries on a wish-list of mutually beneficial initiatives.

First, the current conflict in Tigray must end immediately. Not only is it an unwinnable war but also the issues that led to it can only be resolved through political means. Therefore, the following four things need to happen expeditiously:

The immediate, complete, unconditional and internationally verified withdrawal of Eritrean forces from Tigray and any other parts of Ethiopia.

An internationally monitored ceasefire in Tigray, unfettered humanitarian access and protection of civilians and refugees.

The urgent demarcation of the border between Eritrea and Ethiopia.

A political dialogue on all aspects of the conflict, including matters related to the Tigray’s relations with Eritrea.

An independent investigation of all the alleged war crimes and crimes against humanity in Tigray.

I have no illusions about the difficult work this will involve. The nature of the conflict, the current alignment of interests, the level of political and military investments by all (including the scale and size of their deployments), and above all, the obdurate nature of President Isaias, offer little hope, if any, of an Eritrean withdrawal anytime soon. But the alternative is the continuation of this horrendous war with even ghastlier consequences for civilians and for regional stability. The regional impact of the Tigray war is already being felt, and far greater risks loom on the horizon. The international community simply cannot allow this conflict to continue. As an immediate measure, it must put concerted, constant pressure on both Addis Ababa and Asmara to effect an Eritrean withdrawal that is subject to independent verification through the United Nations or another multilateral mechanism. This is positive pressure for peace, not interference. And we know that the two governments are not impervious to such pressure when the message is firm and unambiguous.