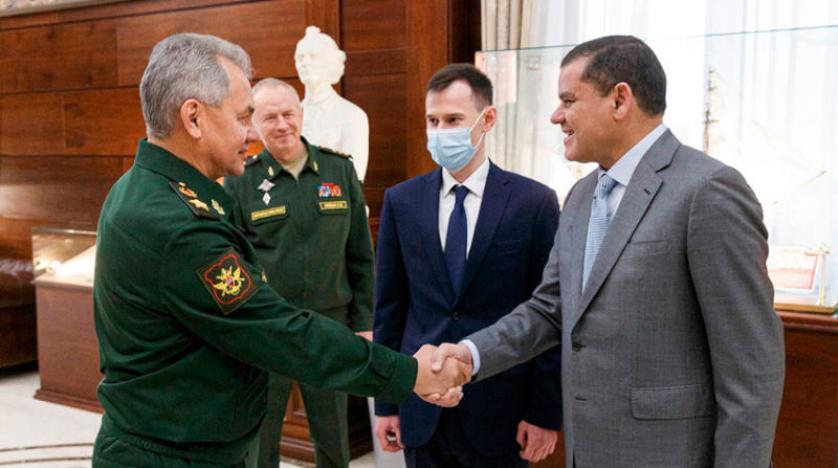 Dbeibeh Calls on Russia to Withdraw Wagner Forces from Libya

The Prime Minister of Libya’s Government of National Unity (GNU) Abdulhamid Dbeibeh called on Moscow to pressure the Russian Wagner company to withdraw its forces from the country.

This came as the UN Security Council unanimously passed a resolution that calls for all foreign forces and mercenaries to leave Libya and gives the green light for a UN team to monitor the ceasefire agreement.

In a statement issued after a meeting with his Russian counterpart Mikhail Mishustin, Dbeibeh urged the Russian side to pressure the Wagner group in this regard.

The PM also met with Russian Foreign Minister Sergey Lavrov. Later, the two officials held a joint press conference, during which Dbeibeh asked for Russia’s help in overcoming the division and end the war.

“Our first goal is to ensure the unity, stability, security, and development of our country,” asserted Dbeibeh. He also requested Russia’s help in unifying the military establishment.

Sources said that the dispute occurred after the public prosecutor issued an arrest warrant for one of Kikli’s bodyguards on charges of involvement in a criminal case.

Gunmen were seen onboard military vehicles in the center of Tripoli, but no clashes occurred.

On Thursday, the head of Libyan National Army (LNA) Khalifa Haftar, received a delegation of the tribe of Mohamed al-Menfi, the head of the Presidential Council.

Haftar’s office issued a statement indicating that the Menfi delegation thanked the commander for his efforts and affirmed their support to the army in imposing security and eliminating terrorism and armed militias in the country.

For his part, Haftar expressed his deep gratitude for their continuous support.