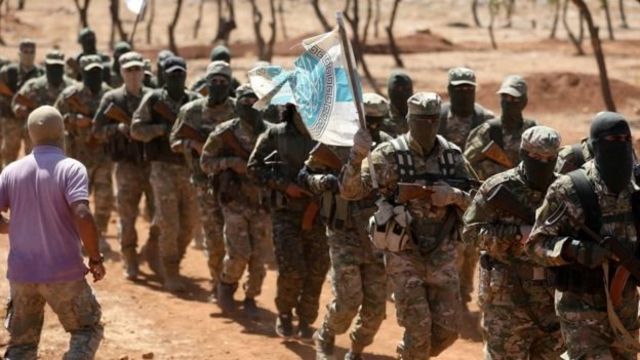 Are Turkey and the Islamist HTS group in Syria’s Idlib allies?

Abu Mohammad al-Jolani, leader of the Hayat Tahrir al-Sham (HTS) in northwest Syria’s Idlib province, sought to stress in a recent PBS interview that his group doesn’t pose a threat to the US or the West but to the contrary shares common interests. Is his group already an ally, or even a proxy, of Turkey?

“For the last couple of years, Idlib has come under attack from Syrian, Russian and Iranian forces, with Turkey backing opposition groups, including, sometimes, Jolani’s group,” the PBS report noted.

Former US Special Representative for Syria Engagement James Jeffrey said in early March that HTS is “an asset” for US strategy in Idlib.

In response to these statements, Nicholas Heras, Senior Analyst and Program Head for Authoritarianism at the Newlines Institute for Strategy and Policy, tweeted that he doesn’t believe “it’s out of the realms of possibility” that HTS is “a Turkish intelligence (MiT) asset, and via proxy from Turkey to [the] USA (as needed).”

“HTS cannot survive without Turkish support, it’s that simple,” Heras told Ahval. “Turkey’s significant military investment to protect Idlib is the key factor that protects that region from collapsing back into the control of Assad and his allies.”

In addition to this, Turkey, which has deployed substantial military forces in Idlib since late 2017 as part of the tripartite Astana process with Russia and Iran, also controls the most important transit routes for humanitarian assistance and trade with the HTS-controlled parts of Idlib, which it keeps open.

“HTS is the dominant actor in Idlib, and it would be quite expensive in terms of casualties and destruction for Turkey and Turkish-backed Syrian proxy groups to remove HTS from power,”

Heras said. “HTS is literally the only local Syrian actor that can control Idlib at a low cost for Turkey.”

“Turkey and this Syrian al-Qaeda-linked group have a symbiotic relationship, and HTS is an asset to Ankara,” he added.

Professor Joshua Landis, Director of the Center of Middle East Studies at the University of Oklahoma, also believes that Turkey has “accepted the supremacy of HTS and Jolani in Idlib province.”

“It has done little to push Jolani aside,” he told Ahval. “Turkey’s acceptance of Jolani is largely due to Ankara’s belief that the ‘Syrian National Army’ and other Syrian militias that Ankara supports do not have the power or leadership to challenge Jolani.”

Landis pointed out that prior efforts to do so led to failure, such as in January 2019 when Turkish-backed Syrian militiamen proxies in Idlib surrendered huge swathes of ground to HTS.

Consequently, Ankara came to the same conclusion as Washington, “which is that the more moderate Free Syrian Army militias were no match for the radical Islamist organisations.”

According to Landis, the US supports Turkey in Idlib and wants to turn Syria into a quagmire for both Russia and Iran by, in lieu of committing its own ground forces, finding allied groups that can prevent Damascus from recapturing the north of the country.

“These allies, or ‘assets,’ as James Jeffrey called Jolani, include the HTS and Turkey, both of whom serve the US policy to deny Damascus access to oil, water, and much of the best agricultural land of Syria,” Landis said.

“The Biden administration has made it clear that it intends to continue this policy of weakening Damascus in favour of its regional allies, Idlib, Turkey, and the SDF,” he said, the latter group being the US-allied Syrian Democratic Forces that presently controls large parts of northeast Syria.

Kyle Orton, an independent Middle East analyst, believes that Turkey wants HTS to survive because it fears that the group’s defeat by the Syrian military could push many of the three million people living in HTS-controlled territory over the border into Turkey.

terrorists (i.e., HTS) in Idlib, other than the fact the Astana process was an exercise in insincerity between parties acting in mutual bad faith, was more to do with inability than unwillingness,” Orton told Ahval.

“HTS is so embedded in Idlib that even the genocidal violence the [Assad] regime coalition is willing to use is not guaranteed to be able to uproot it.”

Since leaving his post, Jeffrey has made a habit of making some “pretty wild statements,” with his comment about HTS representing a US “asset” constituting the latest such example.

Also, while Turkey did indeed establish communications with HTS through MiT, these are for “deconfliction” purposes made out of necessity since the Turkish military operates in many of the same areas of Idlib that that group controls.

HTS is much lower on Turkey’s priority list in Syria than the Islamic State, the Kurdish YPG, and the Al-Qaeda affiliated Hurras al-Deen (Organization of the Guardians of the Religion). This, Orton reasoned, is because HTS, as Jolani sought to emphasize in his latest interview, “has not been tied to international terrorist plots.”

The caveat here is that everyone, the Turks included, are wary of HTS’s claim to have disengaged from Al-Qaeda, not least because the practical fact is that HTS is protecting Al-Qaeda’s Syrian branch, Hurras al-Deen, despite occasional clashes and HTS having apparently clipped Hurras’ wings more seriously recently,” Orton said.

While it is easy to understand the “discomfort” some have about Turkey’s handling of HTS and related worries over where it will end up, Orton argues that at least “two caveats” need to be addressed.

For one, it’s incumbent upon critics or opponents of Turkey’s Idlib policy to say what the alternative is in light of the fact the situation has so severely deteriorated with up to three million Syrian lives in the balance.

He also argued that Turkey should be acquitted on charges of trying to legitimise or normalise HTS.

“It could be argued Turkey has engaged too deeply with HTS or risks doing so, leading to adverse consequences, but there is clearly no subjective desire on Ankara’s part to assist HTS in gaining political recognition and acceptance,” he said.

Orton concluded by pointing out that it was after the Turkish Army was deployed to Idlib in 2017, when HTS escorted its first convoy into the province, that Ankara put the group on its list of terrorist groups.