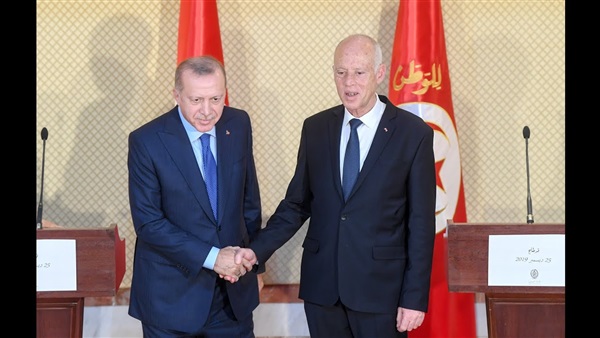 Ennahda turned Tunisia to terrorist base for Erdogan

The Tunisian authorities face questions and popular criticism of suspicions that Tunisia agreed to the Turkish use of airspace and lands to pass terrorist payments to the Al-Wefaq government in the Libyan West.

While these suspicions are based on a set of Tunisian-Turkish understandings, which were evident in the visit of the Turkish President to Tunisia at the end of December 2020, since the beginning of 2020, the Tunisian Parliament has witnessed several sessions to hold Tunisian officials accountable for Tunisia’s role in passing Turkish support to the reconciliation government.

Despite the assurances repeated by Tunisia, through its Ministry of Foreign Affairs, of its neutrality towards the Libyan crisis, all this did not prevent accusations from the Tunisian authorities of involvement with Turkey in supporting the Libyan militias.

The most recent of these accusations was raised by the Tunisian lawyer and political activist, Farid Alia, who demanded that the Minister of Communications Anwar Maarouf be held accountable for the suspicious targets of Turkish aircraft and their relationship to the military supplies of armed groups in the Libyan West.

“Alia” expected in press statements that the planes of the Libyan terrorist Abdel Hakim Belhadj would be loaded with terrorists and mercenaries whom Erdogan promised to send to the government of Fayez al-Sarraj.

He accused the Tunisian Minister of Communications, who belongs to the Renaissance Brotherhood, of serving the agendas of Parliament Speaker Rashid Ghannouchi and his party at the expense of the interests of the Tunisian state.

The Tunisian lawyer considered that these operations, which are carried out under the administration of the President of the Tunisian Parliament, are trying to disturb the balance of power in Libya and embarrass the Tunisian National Security Council, which is headed by Qais Saeed.

It is not only he who sees this, as the Tunisian political climate witnesses a case of rejection by the Ennahda Movement against the backdrop of its movements in support of the Al-Wefaq government and its use of Tunisia in these movements. Siri, no one knows his directions.

She warned that the goal of Ghannouchi’s presidency of parliament was to serve his suspicious agendas linked to extremism, atonement, and obscurantist ideas, she said.

Since the outbreak of the battles for the liberation of Tripoli by the Libyan army, the Al-Nahda movement announces its full support for the armed militias in the capital by virtue of an intellectual rapprochement between them, describing the Libyan army’s moves as “aggression”.

These statements were repeated by Ennahda, supported by a series of tours in which Tunisia welcomed Brotherhood officials to Libya, the most prominent of whom was the Libyan head of the State Council, the Brotherhood Khaled Al-Mashri.

Ennahdha refuses to describe the militias as terrorist, which led sectors of the Tunisian people to resent the Brotherhood, which they said sacrifices in Tunisia and ideology overcomes the interest of the country.

In that, the Tunisian activist, Qais Benihamd, says: Ennahdha is like any of my brothers’ loyalty to the group’s thought and not to the homelands, considering that they do not recognize the nation-states as their homelands at all.

The Egyptian writer Emile Amin, in turn, saw in the article “Does Tunisia become a war platform?” Published in the newspaper Asharq Al-Awsat on December 28, 2019, the Turkish president decided that the ruling political system in Tunisia, headed by Qais bin Saeed, is a good opportunity to pass Turkish projects in North Africa.

He continued: “The witness who has a little strategic science realizes that Erdogan has found in the Tunisian regime a Trojan horse that is able to be executed through him to Libya, especially that day after day it becomes clear that the features of simplicity and tranquility that attracted the majority of the Tunisian people who sympathized with the person of the candidate As an independent, it was nothing but an artificial garment used by all Muslim Brotherhood teams since the beginnings of the fateful time that the Arab Spring called.