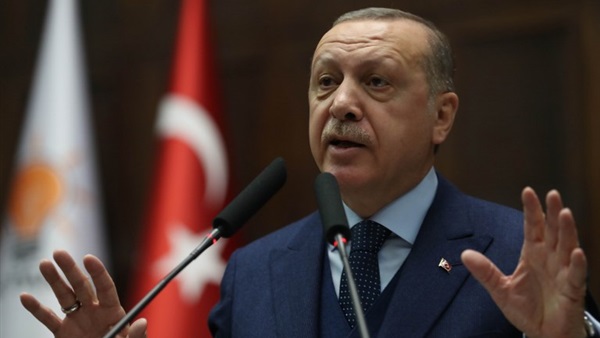 The Turkish lira fell to an all-time low on Friday, plunging 20% versus the US dollar in one day. In a speech, President Tayyip Erdogan urged Turks to swap dollar and euro holdings to the Turkish lira in a bid to increase its value via hiking up demand for it.

Erdogan cited what he labeled as “a foreign conspiracy” to ruin the Turkish economy as the lira fell to 6.99 versus the US currency (USD=6.99 lira), a historic record low, shedding roughly 40% since the beginning of the year.

Turkey’s economic turmoil is a result of over-indebted Turkish companies, which relied on credit in the US currency in compliance of Erdogan’s policy for economic development driven by borrowing.

Turkey has suffered from a serious current account deficit as it relied heavily on foreign funding, especially in the US dollar. The economic turmoil has worsened due to structural problems caused by the economic policies applied by the Erdogan-led government.

The Turkish banks were hit hard, and accelerating inflation rate has slashed the purchasing power of the Turkish family by 16% in July alone.

The European Union is concerned of possible shockwaves that may affect stock markets and European banks operating in Turkey, especially as the central authorities hesitate to take action against the lira crash and spiraling inflation.

The Erdogan-led government is afraid of increasing the interest rates as a solution. It also hesitates to take action against capital outflows by toughening the monetary and financial policies.

Analysts say such painful solutions may trigger massive protests against Erdogan and his economic policies.

The Turkish lira took another blow on Friday after US President Donald Trump approved higher tariffs on steel and aluminum imports from Turkey by 50% (from 25% and 10% to 50% and 20% respectively).

But why Trump imposed economic sanctions on Turkey?

A diplomatic crisis has erupted between Turkey and the United States after Ankara detained American Christian pastor Andrew Brunson last week. Ankara accuses Brunson, who is under house arrest, of spying for Fethullah Gulen and Kurdistan Workers’ Party. The US announced sanctions on Turkey’s Justice and Interior ministers.

However, Ankara refuses to release Brunson.

The US imposed economic sanctions mostly on the back of the Halkbank case. A US court sentenced nine Turks, including Mehmet Hakan Atilla, deputy manager of Turkey’s state-controlled Halkbank.

Atilla, former government officials and three executives were sentenced by Manhattan court to 32 months in prison for charges of money laundering, forgery in billions of dollars affairs. The charges also included taking part in a scheme to help Iran evade US sanctions as Ankara encouraged trade with Iran between 2010 and 2015.

Turkish businessman Reza Zarrab admitted he had taken part in Halkbank’s money laundering schemes and cooperated with the FBI to arrest all the people involved in the case.

The US court asked Halkbank to pay back billions of dollars. The case also involves Erdogan’s son-in-law — Berat Albayrak — and Energy and Natural Resources Minister, who was head of Calik Holding, the parent company of Aktif Bank, which is also involved in the matter.