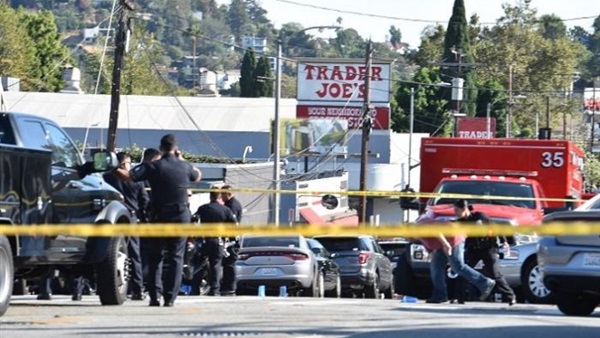 The police detained on Sunday a gunman who had a woman and held a number of hostages in a busy Los Angeles supermarket. The man held dozens of people hostage at Trader Joe’s for about three hours Saturday before handcuffing himself and surrendering to police. No hostages were seriously hurt.

The US security authority said the man agreed to handcuff himself and walked out the front door, surrounded by four of the hostages. The unidentified man, who police said is about 28, was immediately taken into custody. Police said he had a wound to his arm.

Among those who survived the harrowing afternoon was 91-year-old Don Kohles. He lives in the neighborhood and was walking into the supermarket when he saw “two police cars coming like a bat out of hell” and the suspect crashed into the pole.

The driver got out and police started firing at him as he ran toward the Trader Joe’s. Kohles hurried inside and he and others took cover as the suspect ran in.

“Those bullets went right over the back of me as he was running right down the main aisle,” Kohles said. He was terrorized as he lay on the floor and others around him sobbed.

Christian Dunlop, a real estate agent and actor who lives nearby and frequents the Trader Joe’s, was on a corner near the store when he saw four people run out. One person, an employee, was dragging an injured woman by the hands.

He then saw about five employees hang out a second-floor window and drop to the ground, and about 15 other people run to safety from the back of the store. Among them was a police officer carrying a small child, he said.

“I know all the employees. I see them all the time. My heart was just racing and thinking about all the endless possibilities,” Dunlop said.

Makela Wilson, 26, an office manager, had finished shopping and was driving out of the parking lot when the suspect crashed his vehicle and police opened fire. She heard three or four gunshots and then officers in SWAT gear arrived and ordered her and other people in their cars to hunch down in their seats.