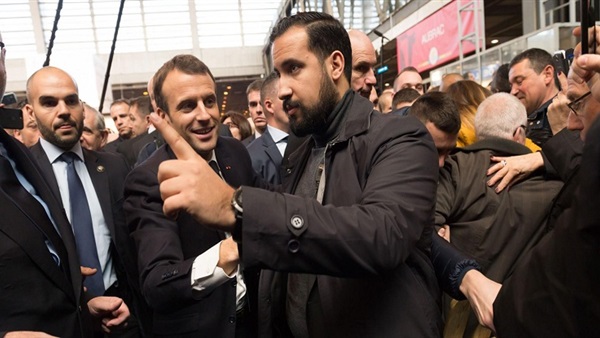 The French president breaks his silence to absorb the public anger and the French opposition asks for no-confidence vote on Macron’s government.

Up until now Macron’s time as the French president has been fairly smooth, albeit with some difficult moments, but the Benalla-gate has become the biggest crisis President Emmanuel Macron has faced since he came to power.

It has been caused by the actions of his trusty 26-year-old security aide Alexandre Benalla during a protest on May 1st. The popularity of the President reached to the lowest levels, according to a new survey conducted by the French company Ipsos, which described the crisis as the biggest that has been exposed to Macron since his election.

“If they want to know who’s in charge, he is standing before you.. I answer to the French people” said Macron, who has been criticized by the opposition for his silence in the affair.

Questions continued to swirl after France’s interior minister and the Paris police chief both indicated in testimony that they were unaware Alexandre Benalla would be attending the police operation during protests on May 1. It remains unclear how Benalla obtained the armband as well as a police radio.

Left-wing Republican Party leader Christian Jacob announced that his bloc would offer a memorandum to vote for no-confidence against the government over the furors engulfing President Emmanuel Macron’s bodyguard, who was filmed hitting protesters.

“The government has failed and must be held responsible in front of parliament” the head of The Republicans party at the lower house, Christian Jacob, told reporters.

He also added Macron’s office failed to punish the head of his security detail sufficiently or refer him to judicial authorities because he has grown out of touch with ordinary people.

Emmanuel Macron said that he “in charge” in the scandal surrounding a top security aide, Benalla, filmed manhandling May Day protesters and that he considered the acts “a betrayal”.

“If they want to know who’s in charge, he is standing before you, I answer to the French people, said Macron. He added “If they are looking for the person in charge, the only person, it’s me and me alone,” Macron went on to say.

“I am the one who trusted Alexandre Benalla,” he said, according to lawmakers, adding that Benalla had been a supporter during his campaign but that he felt “the acts on May 1st were like a disappointment or betrayal.

Macron has so far refused to speak to the public on the worst scandal to hit his government since he was elected in May promising to restore integrity to french politics.

His silence appears to have dented his ratings, with 60 percent reporting an unfavourable opinion in an Ipsos poll published a record low for the 40-year-old centrist.

An Elabe poll found 80 percent were “shocked” by the scandal, with 75 percent urging Macron to break his silence.

The French leader, who fired Benalla on Friday, has not publicly commented on the case since it broke a week ago.

According to an IPSOS poll released on Tuesday, the first since the story emerged, Macron has seen his popularity fall to 32 per cent, down four points since June, his lowest level since September 2017.

Opposition parties have been united in outrage over the incident and have stepped up their attacks on the government following Collomb’s hearings. More hearings, including Macron’s chief of staff later on Tuesday, are scheduled this week.

Interior Minister Gerard Collomb as well as Paris police chief Michel Delpuech told lawmakers Monday that it was up to Macron’s office to either inform prosecutors or impose any punishment.

In the context of the crisis, Macron asked the Secretary-General of the Palace to reorganize his own office on the background of the case, a source close to the French president said.

The President asked the Secretary-General of the Elysee Palace to reorganize this imbalance in the future while presiding over a meeting at the Palace in which Prime Minister, Interior Minister, Government Spokesman and State Secretary for Parliament.

It was only last week when Le Monde newspaper published video footage of the attack that Benalla was summoned for questioning by police and put under official investigation on Sunday. He was sacked after the crisis escalated.

Talking to supporters in Paris on Tuesday evening, Macron said: “An exemplary republic doesn’t mean making no mistakes. Nobody around me or in my cabinet has ever been protected or exonerated from the rules.