Latest Posts
16:55
Home Book Reviews Management of Barbarism … The Most Dangerous Phase the Nation Will Pass Through 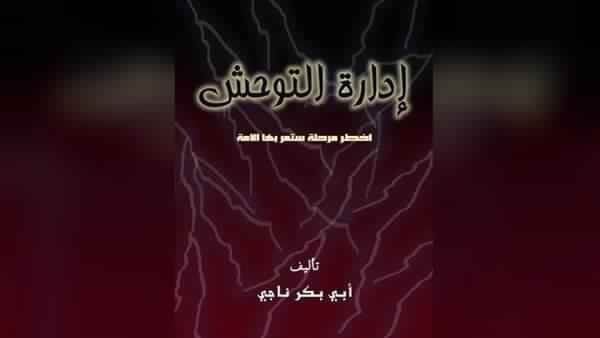 The book’s name: Management of Barbarism … The Most Dangerous Phase the Nation Will Pass Through

The book, “Management of Barbarism… the Most Dangerous Stage the Nation Will Pass Through”, is one of the publications that have been addressing the ideology of Islamic armed groups over the past decade. In addition to representing the old constitution of al-Qaeda, it also embodies the Islamic State’s fighting strategy for the time being.

The book is written by the jihadist Abu Bakr Naji, and there is conflicting data about his real character. Some reports say that he is likely to be an Egyptian shock officer named Mohammed Salah Eddin Zidane and is called “Seif al-Adl”. The book shot to fame and was published on more than 15 thousand websites on the internet.

It revolves around the main idea of “barbarism” and the meaning of the state of fear and chaos in the countries governed by weak regimes. The author responds to how to reach that stage and to move to the new phase of the jihadist organization dominating and managing the state according to its constitution.

The book provides many methods used by the jihadist groups to manage the phase of chaos or barbarism and to create a state of fear and panic among people, as well as to perpetrate acts of killing and sabotage, with the aim of establishing the principles of Islamic law.

In the opinion of the author, the ugliest forms of barbarism or chaos in the country and the terrorist acts carried out by the jihadist groups are more acceptable to extremist organizations than the continuation of infidel regimes “current regimes based on the principles of Western culture”.  After the collapse of the current ruling regimes, the role of these organizations emerges in the management of the state of chaos “barbarism” which is prevalent in that stage – not only in Islamic countries but also in Western societies.

As stated in the book, the state of barbarism will reign with the help of jihadist groups which will provide the basic needs for citizens. This comes while creating a state of fear and horror by killing all violators with the aim of establishing Islamic law.

In an advanced phase of managing barbarism, after exhausting local regimes and Arab political elites, touted by the jihadists as “puppet regimes,” the author presents – from his point of view successful models who establish Islamic sharia, including Pakistan, Afghanistan, and Somalia. The main element for him is the jihadist administration despite all the destruction that such organizations make in the society.

He did not think for a moment about retrieving the history of Islamic civilization and how the status of mankind and the freedom of belief was upheld and enjoyed by non-Muslims in the era of the Islamic caliphs.

The book is part of the electronic terrorism trend used by jihadist groups to attract young people in the country and motivate them to revolt against the current regimes and embark on a new phase of chaos that weakens security and military authorities. Such a tactic opens the way for jihadist organizations to find refuge both for them and their ideas; a matter that is evident in the Arab region, where the control of the security forces over some parts of the country disappeared. Thus, the Islamic State or Daesh has replaced the military, and security forces in large parts of Iraq and Syria.

The book is a mirror of the terrorist operations carried out by Daesh. We see the organization’s operations in Europe and its use of unconventional mechanisms to carry out its operations, including “lone wolves”. The writer believes that acts of killing and vandalism, even if small, have a long-term impact.

The author has also linked the methods of replacing the current political elites with the jihadi administration and the concept of creative chaos presented by the US administration. He made such linking so that the final result would be creating a state of chaos through which the US administration can use new elites to preserve its interests in the Middle East and change the political map according to its perception. That brings the idea of “rogue states” such as Iraq and Libya, and indeed the political regimes there were eliminated.

The creative chaos is different from barbarism. The stage of barbarism is mostly characterized by panic and murder among people. Creative chaos is the consolidation of certain political elites who trigger revolutions, create more unrest and do not mind the invasion, like what happened in Iraq.