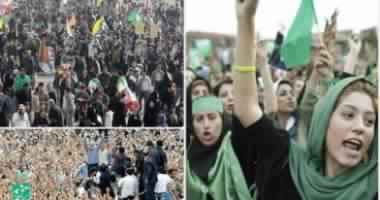 Yisrael Katz, the Israel’s intelligence minister, on Monday voiced encouragement for anti-government protests in Iran, but added that Israel has a policy for non-interference in Tehran’s internal affairs.

Four days of protests in Iran have been the strongest challenge to the Islamic leadership since unrest in 2009 to demand reform. “I can only wish the Iranian people success in their fight for freedom and democracy,” Katz said in an interview with Army Radio.

“If the people succeed in achieving freedom and democracy, many of the threats against Israel and the entire region will disappear today,” he said. Israel has long been concerned about Iran’s nuclear program and Tehran’s support for Islamist fighters in Lebanon and the Palestinian territories, a concern shared by Sunni Arab states as well.

Asked why Israeli Prime Minister Benjamin Netanyahu did not follow the footsteps of US President Donald Trump in expressing greater support for the protesters, Katz said: “Israel is committed not to interfere in this internal matter.”

He added that Trump’s tough approach to Tehran, which includes the threat of US sanctions, has shattered the “economic improvement” of the Iranian government.

On Sunday, an Iranian official blamed “foreign agents” for a murder in which he was killed, and Katz rejected the charges as a typical “liar and proletarian system.”