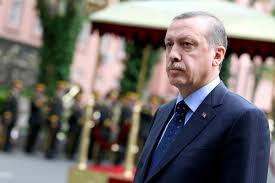 Erdogan a story of deceptive president

While spending his deprived childhood in Rize province, Turkish president Recep Tayyip Erdogan was obsessed with the idea of leading of Muslim countries where it remained in his mind until he engaged in political life.

Erdogan, who was a street hawker selling watermelon, conceived that the Ottoman Caliphate could be reproduced by him as a leader of Muslims in the world.

While turning form the state of imagination into the fact, Erdogan pressed ahead with his flimsy dreams where he started the political career from the failed Islamist National Salvation Party (MSP) and was later promoted to the chair of Istanbul youth branch of the party.

In 1980 all political parties were dismantled and Erdogan moved to Islamist Welfare Party by which he succeeded to assume the chair of the capital Istanbul.

Given his radical thoughts which instigate people to initiate violence, the Islamist Turkish president was barred from candidacy for the parliament and held in prison on charges of the incitement of religious hatred.

After getting out of prison, Erdogan severed his relations with the two Islamist parties and helped Abdullah Gulen establish Justice and Development Party (AKP).

Erdogan deceived the Turkish people by announcing that he will not violate the foundations of the republican regime preserved by the Turkish constitution.

He also promised the people to draw up a clear policy in accordance with Ataturk’s goals to set up an advanced and modern society.

In his deceptive manner, he took the office of prime minister in 2003 with the help of Gulen who provided support to him by persuading the majority of parliament dominated by the AKP to candidate him for this office.

Now his companion Gulen is in the US exile, facing accusations of attempting military coup which failed in 2016 and Erdogan rules the country in an iron fist putting all the reins of power in his hand after the suspicious amendment of the constitution last year.