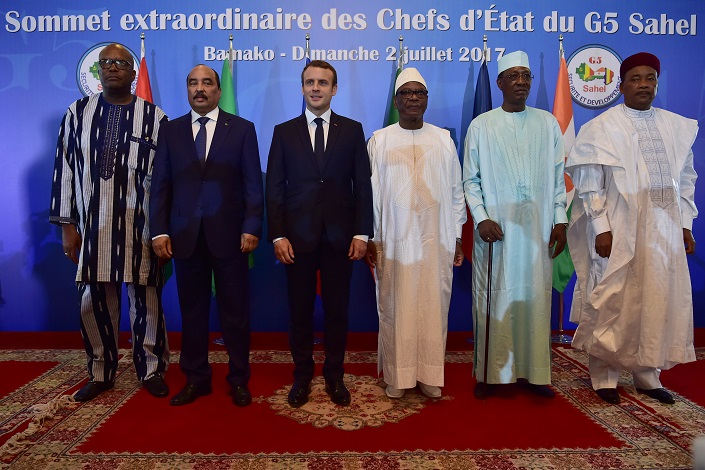 French President Emmanuel Macron is hosting a summit for the leaders of five African nations, in the ongoing effort to combat armed groups in the Sahel region.

Earlier this year, the governments of Mali, Niger, Chad, Burkina Faso and Mauritania agreed to form a joint regional military force known as the G5.

But there are fears it is struggling to cope, as groups like ISIL and al-Qaeda push to expand their operations.

Saudi Arabia and the United Arab Emirates are attending a summit in Paris on Wednesday aimed at accelerating efforts to set up a West African force to combat armed groups in the Sahel region, a sign Gulf Arab states are upping their influence in West Africa.

However, France, which has some 4,000 troops in the region, has bemoaned that the fighters have scored military and symbolic victories in West Africa while the G5 force has struggled to win financing and become operational.

To achieve those ends, French President Emmanuel Macron is hosting among others the leaders of the five participating countries, Germany and Italy as well as the Saudi and Emirati foreign ministers.

Thousands of UN peacekeepers, French troops and US military trainers and drone operators have failed so far to stem the growing wave of violence, leading world powers to pin their hopes on the new force.

“[There] is an operational urgency to regain control of the region and to increase the military effort,” a French diplomatic source said.

Among efforts to widen support, Macron has pressed Saudi Arabia to take concrete actions and asked Saudi Crown Prince Mohammed bin Salman to contribute to the G5 when he saw him last month.

Macron sees the full implementation of the G5 force as a long-term exit strategy for his own forces that intervened in 2013 to beat back rebels in northern Mali.

“The objective is increased military, political and financial mobilisation,” the source said, adding that the aim was to get the 5,000-strong force running by March 2018.

Saudi Arabia has now pledged $100m, a major boost for the force, bringing commitments to more than half the roughly $500m the G5 Sahel says it needs for its first year of operations. The UAE is also funding a G5 “war school” in Mauritania that is due to open in January.

“Both the UAE and Saudi Arabia are interested in the Sahel. Getting a seat at the table, being seen as security stakeholders, is something that fits in their respective strategy. Both have ambitions in large chunks of Africa,” said Jalel Harchaoui, a geopolitics researcher at Paris 8 University.

Prince Mohammed bin Salman is also setting up a separate Islamic military coalition, whose member countries can request or offer assistance to each other. This could include military help, financial aid, equipment or security expertise.